Cheap airfares take off in Poland

Polish travellers usually have to pay a much higher price for charter flights than western holidaymakers. The main reason is that airline companies in Poland set artificially high prices and haven't allowed foreign competition. But now, Poland's national carriers may be forced to re-think their strategy. GetJet, Poland's first low cost airline takes to the skies this autumn. This may be good news for Czech and Slovak travellers as well, because the airline will be using an airport close to Poland's southern border. 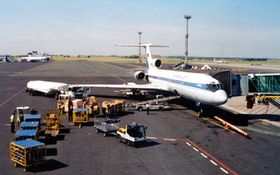 GetJet, a subsidiary of the TSB holding is offering flights starting this autumn from Katowice in the industrial south to the UK, Rome and Paris. Katowice airport is an excellent choice for what is Poland's largest urban sprawl in the south. GetJet owner Janusz Sitarz, says GetJet intends to fly a small fleet of modern French-made aircraft.

"We are starting with two Airbuses - 320 and 211 and the growth will be, of course, up to the market requirements. The first step is Western Europe. Let's say to London, compared to LOT, the regular tickets should start from 99 zlotys up. That's 25 euros. We are trying to have the load factor on a level of 80 percent for the whole 12 months."

But can such cut-rate flights actually pay off in the long term? Poland's first private charter operator White Eagle suspended their charter flights several months ago, because economic stagnation, SARS and security concerns kept many Polish holidaymakers at home. Can GetJet count on success in this unpredictable market? Aviation expert Robert Wylot argues that if this new Polish low cost airline generates a solid client base and continues to undercut the competition then GetJet may become a success.

"They will compete with LOT. But LOT will not be the primary competitor, because LOT will probably stay in the higher fare sector. They will actually compete with new airlines trying to enter this new emerging, but very promising low cost market. The question is who else except GetJet is going to enter this market and how soon and how aggressively. I'm absolutely certain that both EasyGet and Ryanair and perhaps other low cost carries in Europe will try to enter the big Polish market. It's the biggest airline market, called 'biggest transport market' in the EU accession countries. The question is whether they are careful competing with the big players and how aggressive the big players will want to be. And I expect them to be very aggressive."

When communism fell in 1989, many Poles believed that a whole new world had opened up before them - a world of free travel. Soon, though, they realised that the iron curtain may have gone, but foreign travel remained a relative luxury, largely because of the air ticket costs involved. With GetJet, foreign travel may become more than just a dream.