European Union leaders and the Bush administration wrapped up a summit in Washington this week at which they emphasised their friendship and common goals. President Bush said the United States supports a strong European Union and EU External Relations Commissioner Benita Ferrero-Waldner said relations had improved markedly in recent months. The EU-US summit occurred against the backdrop of a crisis in the European Union over its constitution and it was a much more conciliatory tone between Washington and European capitals than we've been used to hearing.

So what's changed in the Trans-Atlantic tussle? We spoke to Sebestyen Gorka, Director of a Budapest based think-tank - The Institute for Transitional Democracy and International Security:

"We are talking about a new foreign policy in the White House, almost a 180 degree turn on several issues that are both ideological and practical. I think that many issues have come together for the Republican-led administration, which are potentially favourable. Even the failure of the EU summit could have a positive effect on trans-Atlantic relations."

Many commentators have been saying that Washington is swimming in Schadenfreude over the EU's problems. Are you saying that it's not really the case?

"There's an issue here: 'what is the future of the EU?' If one wants to be realistic about the new expansion, what countries are drawing from Central Europe, there is a potential here for a new bloc to develop. These are countries that really are not pro-federalist in the German or Brussels sense and wish to be part of the club on their own terms - a club that does not undermine their national interests. It looks as if in the next eighteen months Poland, Hungary, and the Czech Republic will have new governments that are pro-Atlantic and conservative and have a different appreciation of what 'project Europe' means and I think the White House knows this."

So the point you're making is that the new countries coming into the European Union with a more pro-Atlantic approach will improve the trans-Atlantic relations as a whole, between Europe and the United States?

"Yes, that is my expectation. I think the declarations and the kind of rhetoric that has been used by the White House at the moment best testament to the fact that they too have realised that despite what looks to be quite a scandalous state of affairs inside the Union at the moment, it could actually work to the benefit of certain countries here and to the Republican White House."

What about European attitudes to the United States. Isn't there a problem with growing anti-Americanism in Europe? 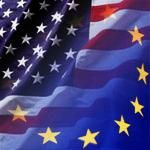 "If you look at it from a historic perspective then I don't think that any of this is new. If you go back to the student riots in the 1960s, or go back to Vietnam, even the 1970s, the oil crisis...there has always been a latent or sometimes even less-than-latent anti-Americanism many parts in the population in Europe.

"It's an unfortunate fact because the welfare state or the luxurious situation that Europe has managed to create for itself through the institutions of integration was only truly possible because the US guaranteed the security of Western Europe for forty years. Without the nuclear umbrella, without NATO, and Article 5 of the Washington Treaty, Europe would not have had the option of creating a welfare state. So, there is a little bit of an air of being an ingrate, with regards to how well Europe is at the moment and how little it has to do with the involvement of America. I think this is short-sightedness on behalf of many people."