In this week's Insight Central Europe, as the EU meets in Thessaloniki to discuss the future of Europe, we ask Central Europeans what they think of an "EU Constitution". We hear Polish demands for Christian values and a ban on abortion to be enshrined in the new EU, and find out from a former Slovenian foreign minister where his country stands on the Constitution. Euro-sceptic and Europhile Czech students battle it out over the idea of an EU President, while in Austria, there are calls for ethnic minorities to be protected across the Union. All that and much more in this week's ICE. 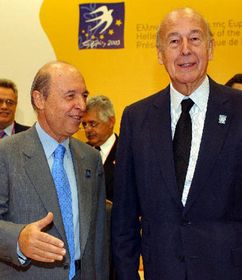 Seventy-seven percent of Czechs last weekend said "YES" to E.U membership. But just days after the Czechs held one referendum, politicians are already talking about another - on the future of Europe as outlined in the new European Constitution unveiled in Thessaloniki this week. So what do Czechs make of the blueprint for a new Europe? Do they want for instance, a Powerful European President? Two Czech students voice their views

Zuzana Smidova: "The European Union as it stands now is so untransparent, so undemocratic. It's very difficult for people to identify with twenty commissioners, how many people even know who the present commissioners are? So in a sense [having an EU President] would give the EU a clear identity, one person to identify themselves with.

Tomas Jirsa: I don't agree with this. You say that it's going to be more transparent by expanding the competencies of another bureaucrat in Brussels, but I really don't agree. I don't see it, because all these commissioners are going to stay, they aren't going to disappear.

ZS: I'm not saying that the draft as it is is ideal. I'm just saying that the EU needs reform. And to make it more accessible to normal, ordinary voters, it is good to have one figurehead at the top who is visible, who has clear responsibilities. One person at the top of an institution is always easier for people to identify with.

And who you do think is big enough to fill those shoes? Does anybody spring to mind, someone who would make a good EU president?

TJ: I don't think it's possible to find one person among all these different national interests being able to represent them. It's impossible.

Can you imagine, say, an Irishman for the president of the European Union, or your president being Greek?

ZS: But you'll have your Czech president, you might as well have a European president. Do you not feel European at all?

TJ: I feel European partly, but I really don't see why should I have a European president while being a Czech. Why should I be like German or Irish?

ZS: But isn't the European Union about overcoming these national difficulties, such as "I feel Czech and I don't see why any Germany official should be above me". Isn't this about creating the greater identity of European people?

TJ: I do not feel any problem with this, being part of Europe. I have no problems with Germans, with Irish people, with English people, but I just do not feel the need and demand here, in the European Union and Europe, to have one single person representing us all.

Would it not be the case though that if Europe was a more single, identifiable body, if it had a president, if it had a government, if it had a foreign minister, than as Zuzana said, people would identify more with the idea of being European, and perhaps the whole organisation would also work more smoothly?

JS: I think this was the tendency of the last years, when various institutions were created, and I just believe that the demand for these institutions is decreasing, nobody is interested in...

Students Zuzana Smidova and Tomas Jirsa, on the future of the European Union. And they were sharing their thoughts with Radio Prague's Rob Cameron.