This week, Czech lawmakers started debating a package of fiscal reforms as proposed by the centre-left government of Prime Minister Vladimir Spidla. Mr. Spidla has staked the future of his three-party coalition cabinet on the success of the reforms which are vital for cutting a widening public finance deficit to meet the Maastricht criteria for euro adoption. However, the government has only the tiniest majority of one vote in the Lower Chamber. Some coalition MP have already voiced their objections to the shape of the reforms and suggested they may seek alterations to some of the dozen or so bills, combining tax hikes with wage freeze in the state sector and cuts in social welfare. Although the reform has been criticised from both right and left for being either too mild or too radical, pundits agree that it is a step in the right direction. However, the uncertain future of the reform package and fears of potential collapse of the government has had a negative impact on the Czech currency, which fell to 32.40 to the euro, its weakest level in a year and a half. I discussed this and other aspects of the current uncertain situation with economic analyst Vladimir Pikora from the Prague branch of Volksbank. 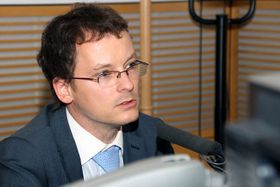 Vladimir Pikora "The future development of koruna will depend mainly on the political situation. If the government survives and all the necessary laws are passed by Parliament, we expect that the currency can slightly strengthen. However, the strengthening will be only mild. It means that koruna could return to the levels of the past weeks, i.e. 31.80-31.90 per euro. However, if the current reform fails and if the government collapses, then the currency will weaken very substantially to around 32.50-32.60 CZK/EUR. Further development will depend on political negotiations about next government. If a new government is installed quickly, the currency will return to levels around 32 CZK/EUR. On the other hand, if things get complicated and a new government takes long to be established, then we can expect further weakening. Nevertheless, we do not expect that koruna will break the level of 33 CZK/EUR."

What will be the impact on the whole economic situation? If you look at the options available when the reforms fail, the government will probably collapse, we can either have a government of the Social Democrats and the Communists, one led by the right-of-centre Civic Democrats, or a new election. Would this help in any way? Does anybody have a better reform proposals than the current one?

The reform is being criticised from both right and left for being either too mild or too radical. Do you think it balanced though, regardless of how radical it is?

"There are two points. First, we have to realise that probably, it would be impossible to have any stronger, faster, sharper reform than the one prepared by the government, just because of the strength of the government which has only 101 seats in the 200-seat parliament. We could not therefore expect anything better. On the other hand, as economists we know that the government's reform proposal is really mild and this country would need something stronger. The government is aiming the public finance deficit at four percent, and not at three percent as stipulated by the Maastricht criteria. Therefore we believe that the current reform is not radical enough, although some people may think otherwise. I think it is balanced, because we can see that on the one hand, the government is trying hard to cut the deficit, but on the other, the government cannot move because they have only the 101 seats."

The reforms will now be subject to debates and changes. Do you think the parliament can spoil the whole thing by changing the parameters of the reform?

"Yes. I am afraid that politicians, members of parliament could spoil it as they change some parameters of the reform and they do not calculate it, they do not have any deep analysis for it. That is why we would recommend not changing the reform substantially, because changes will probably make the reform worse than better."