Inflation on target at around 2.0 percent

The Czech National Bank sees price rises over the next two years staying in line with its 2.0 percent target. The fourth quarter report by the bank published on Friday sees average inflation this year of 2.1 percent falling back to 2.0 percent next year and returning to 2.1 percent in 2012. But it sees interest rates creeping up with the rate for three-month interbank loans rising from 1.3 percent to 1.8 percent by the end of 2012. And it predicts the crown will continue to strengthen to 24.3 crowns a euro in 2011 and 23.8 crowns in 2012. It now stands at around 24.6 crowns to the euro. 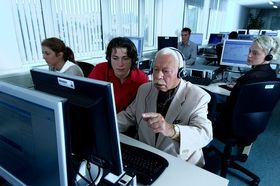 Photo: European Commission The grey, or grey-haired, economy is flourishing in the Czech Republic according to the national statistics office. Research shows around a quarter of a million old age pensioners and those on disability pensions carry out some sort of paid work, mostly part time jobs, while drawing pensions. This amounts to 4.9 percent of the working population. The office says that in some sectors of the economy, especially those demanding higher qualifications such as research, the proportion climbs to as high as 8.8 percent.

The Czech Republic’s second biggest bank by asset value, ČSOB, posted a 12-percent rise in profits to 10.25 billion crowns for the first three quarters of the year. And that strong result has fuelled speculation that its majority owner, Belgian banking group KBC, is in no hurry to offload part of its profitable cash cow. KBC was expected to float up to 40 percent of the Czech bank on the Prague Stock Exchange by the end of the year. But with 2010 running down, there is still no sign of this happening.

Sources quoted by the Reuters agency say the float might now happen in the second quarter of 2011. But many speculate that KBC is holding off for as long as possible. It was ordered to sell assets as a condition for a cash injection from the Belgian state during the recent financial crisis.

The Czech tourism sector showed steady signs of growth in the third quarter of the year. The number of overnight stays was up 0.7 percent compared with 2009 and the total number of guests climbed 2.7 percent. In the second quarter overnight stays dropped in spite of higher tourist numbers. Top of the range hotels fared best, according to the latest figures being around two-thirds full. But the other end of the market, camps, lost almost one in 10 of their customers over the three months ending in September.

Good news for Czech brewers in times of falling sales is that they are still the best producers of their traditional lager and dark beers but are facing competition from some unexpected parts of the globe. That is the verdict from the seventh European Beer Stars competition organized by the association of small European breweries and small German brewers. Czech breweries Zubr and Litovel took the top prizes in the Czech pilsner and Czech dark beer categories. But a Texan brewery was second in the first category and the biggest Peruvian brewery, Backus y Johnston, was third in the dark beer contest. Judges had to choose between 955 beers from 34 countries in the overall competition.