This week’s headline statistic was the 192.2 billion crown figure for the Czech state budget deficit in 2009. The figure, which comes in at around 10.4 billion US dollars, is around five times the planned deficit and is a record for a country which has rarely ended the year with a budget surplus. The stark statistic has set the scene for continued haggling over this year’s budget with political parties clashing over last minute attempts to boost spending. And President Václav Klaus intervened this week with a warning that he will not sign any bills which increase this year’s deficit. 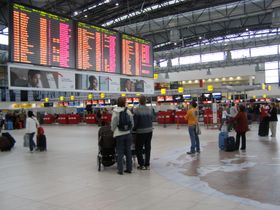 Prague airport has experienced its first drop in passengers for years, according to the airport’s operator. Passengers passing through central Europe’s busiest airport will not exceed 12 million in 2009 based on still preliminary figures. That compares with 12.63 million passengers in 2008. The operator has however highlighted a 6.3 percent passenger increase in December and the fact that it is now being used more as a transit point for ongoing flights. Airports worldwide have reported a stabilisation in passenger numbers since September with increased passengers in November.

Czech bankruptcies up almost 50 percent in 2009

Almost 1,500 Czech businesses declared bankruptcy in 2009 according to the company keeping tabs on developments. That figure is the worst figure since 2003 and a jump of nearly 50 percent on the total for 2008. Experts say that the worst is far from over, since a backlog of bankruptcy applications still have to be cleared. They expect the upward trend to continue in the first half of this year. After that, there are hopes that an economic upturn could lead to a levelling off of bankruptcies.

Czechs are drinking more alcohol-free beer while production of the normal inebriating liquid is down. That is the message from industry body the Czech Beer and Malt Association. It has reported a slight rise in non-alcohol sales last year against a background of an around 10 percent drop in overall beer production. The biggest producer of non-alcoholic beer is mainstream beer producer Plzeňský Prazdroj which is clearly hedging its bets.

Air traffic over the Czech Republic, which is one of the densest in Europe, has dropped for the first time in a decade, the Czech news…