Three media firms have entered talks to buy a controlling stake in TV Prima, the second-largest Czech commercial station. Unconfirmed media reports say the deal should fetch over 200 million US dollars, depending on the size of the stake, and the likely buyer is the Modern Times Group (MTG) of Sweden, a major broadcaster in Scandinavia, Russia, the Baltic States, and Hungary. Rupert Murdoch's News Corporation and Germany's RTL group are also reported to have been in the running.

EIB to lend Czech Republic some $167m towards highway construction

The European Investment Bank (EIB) will lend the Czech Republic 4 billion crown towards the construction of the new D8 motorway from Prague to the northern border with Germany. The new four-lane road will provide the final 23 kilometres of missing motorway link between Prague and the German city of Dresden - along the pan-European corridor connecting Berlin to Istanbul. Once completed, the motorway is expected to greatly lessen the amount of traffic into the Czech capital, as international transporters will have an alternative, faster route to choose from.

The Czech government approved a plan this week to buy military trucks worth some 207 million US dollars from a unit of the US company Terex. The contract is for just under a thousand all-terrain trucks, made by the Czech Terex unit Tatra. Securing the deal would give a major boost to the Czech truck maker, which was nearly bankrupt before the takeover by the US company in October 2003.

Airlines to pay more for flyovers 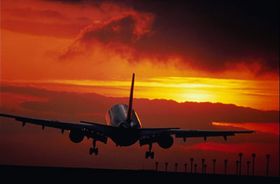 Photo: European Commission Airlines will begin paying more to fly over Czech airspace as of 2006, due to increased traffic and to cover the cost of constructing a new air traffic controlling centre near Prague. Airlines now pay 26.4 euros per flight, the second lowest rate in Europe. The flyover price for the Czech Republic could rise by as much as 30 percent, next year, which would still be less than the EU average of 45 euros.

The Czech-based drugs maker Zentiva has bought a controlling 51 percent stake in one of Romania's biggest generic drugs firm. Zentiva, controlled by private-equity fund Warburg Pincus, reportedly paid 200 million US dollars for the stake in Sicomed and intends to buy out other shareholders.