A symbolic 17th of November launch for 'Czech parliamentary channel'

This November 17th, exactly fifteen years after the start of the "Velvet Revolution" that led to the collapse of Communism in the former Czechoslovakia, the democratic process will "go live" with the launch of a 24-hour public affairs channel. The Czech parliamentary channel, "24.cz", will feature live broadcasts from the legislative proceedings and features on Czech politics. 24.cz will be carried by SES ASTRA, a leading satellite system for direct-to-home transmissions of television, radio and multimedia broadcasts. Martin Kubacki, who heads the satellite operator's regional office in Vienna, says the Czech channel is a "pioneering effort".

"The company changed its strategy; we decided to be more active in Central and Eastern Europe. That's why we opened a new affiliate in Vienna, which I am heading, and this affiliate is responsible for activities in the Czech Republic, Slovakia, Hungary, Slovenia and also Croatia [a non-EU member]. This market is extremely important for us. As you know, satellite has no borders.

RP: Within those countries that you mentioned, is there a parliamentary channel like 24.cz?

"So a purely parliamentary channel, I would say, in the region, this one [24.cz] is the first one. There is a parliamentary radio station in Poland, but not a TV station yet."

RP: Please tell me something about the negotiations with the Czech government, as for putting this channel in place. Did your company approach the government with the idea or was there a public tender, or how did that work?

"No; the issue of setting up this venture — it is a Czech venture, conducted by the Czech company Region Media, which is headed by Mr Leos Pohl. So we were negotiating only the commercial terms with this company [Region Media]. There is not — from our side — any involvement with commercial or political discussions. And we see this venture as politically neutral."

RP: Back to the [one-time] Hungarian parliamentary channel. You mentioned that it switched over to being a news broadcast; is it too early to say how it might be with 24.cz?

"I think it's still too early. I remember that in the case of [Hungary's] "Hir TV", at a similar early stage, the creators of the channel couldn't tell if or when they would drift in the direction of becoming a news channel."

"But, looking at the Czech market in general, there is no news channel yet, in contrary to Slovakia, where you've got TA 3, or Poland, where you've got TVN 24, those channels are very professional. So I'm sure there is room for such a [Czech] channel. I have heard some rumors that public TV [Ceska televize] might start such a venture. But definitely the parliamentary channel, which is a project already on the air, has the biggest chance to become a real news channel. 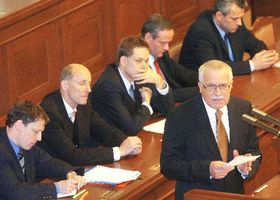 The Parliament, photo: CTK RP: Now today is the 17th of November, a big day in Czech history. Please tell me about the decision to launch 24.cz on this day.

"Well, we had meetings with Mr Pohl [of Region Media, based in Olomouc, the Czech Republic] and we had a question mark, let's say, of when the channel should really be put on the air and launched. For technical reasons, we decided it should be as soon as possible. It's been [in testing] on the air already for two weeks. But definitely we thought that the 17th of November, as a kind of symbolic date for the Czech nation and Czech democracy was the most appropriate date. And it was mutually agreed that the real launch should be on that day. As regards to the programming, to my knowledge, the channel should report on all activities which might be of interest taking place in the Parliament — and also inform about the activities of the government, the president [Vaclav Klaus], and I think also on the European Union as regards the Czech Republic."

"I think the general public. Actually, the same group, I would say, that would be interested in general [public affairs] news. I can tell you that in Western Europe, channels like this one, for example in Germany, Phoenix, it's mostly watched by people who are a bit older or involved in [public administration-related] activities."

RP: And in terms of numbers? Your press release says that 24.cz will be broadcast on such and such transporters and they currently reach of 94 million households in 30 European countries.

"Yes that's correct. The channel is available via ASTRA 19.2 [degrees] East and it's an entire fleet of satellites and the channel is free-to-earth, so it's not encrypted and can be seen throughout the whole of Europe, which means — you know, it's interesting, because ASTRA has a very dominant position in Western Europe, particularly in German-speaking countries — and in those countries the Czech and Slovak minorities are quite large. So from that perspective, it's also quite interesting to address some programmes to [expatriates] as well. It's very early days, but I'm sure there will also be something for them."

To learn more about the Czech parliamentary channel, please go to www.24cz.tv 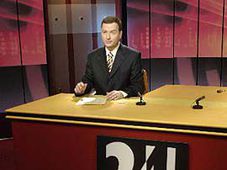 Could a news TV channel survive in the Czech Republic?

After the successful launch of the first Czech parliamentary satellite TV channel last week, one has to wonder when the electronic…