A statistical mistake reveals a brighter picture of the Czech economy

Economic analysts and investors had to reconsider many of their decisions concerning Czech Republic financial affairs last Thursday due to a glaring mistake made by the Czech Statistics Office. We invited Radomir Jac, an analyst from Commerzbank to analyze the situation and explain what effect it will have on the Czech economy and its image abroad. 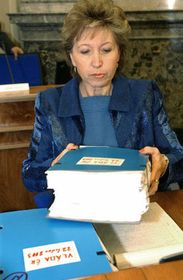 Marie Bohata - President of the Czech Statistical Office, photo: CTK It turned out that statisticians had left 40 billion crowns worth of Czech exports out of their calculations for the third quarter of last year. The mistake distorted the whole picture of the Czech economic growth as well as the GDP figure. Last year's foreign deficit for the period of July to November was thus 40 billion crowns lower than stated 74 billion crowns. The economic growth during the last quarter was not 1.5 percent but a robust 2.7 percent. I asked Radomir Jac, an analyst from Commerzbank, to explain what the new figures meant in the context of the Czech economic scene.

"The revision was obviously a very unpleasant surprise for analysts and I would say that it was an unpleasant surprise not only for analytical units in private sector commercial banks but obviously also for the public sector, including the government, including the finance ministry or the Czech National Bank because the revision was substantial and it completely changed the view on the situation in the Czech economy in the second half of 2002."

Mr. Jac explains that although economists were taken aback by the sudden change all in all the new figures reveal a much brighter economic situation in the Czech Republic than was assumed before. Until now the government believed that Czech exports were suffering heavily due to the strong crown and very weak demand in Western Europe. Obviously the situation is not so bad. Nevertheless, investors and officials made many decisions based on wrong figures. Mr. Jac continues:

"Obviously investors can feel it as a bad surprise because so far reported data were pointing to a bad fundamental situation in the Czech economy and to possibility of further weakening of the Czech crown. This situation and outlook for the Czech crown has completely changed by 180 degrees last week after the revision."

The crown rate to the euro strengthened by 45 hellers as a result of the news. The revision came at a moment when trade unions are still negotiating wage agreements for 2003. Now they have an additional reason to push employers for higher wage growth this year. Mr. Jac says that the government expects to see only negligible impact of the change on the state budget. At the same time, at the beginning of January analysts explained the low budget deficit for 2002 as a result of an increase in collected taxes. Now they have a more realistic explanation for the development - the economy was growing stronger all the while. Mr. Jac says that thanks to stronger exports the government may expect higher tax returns from the corporate sector and exporters. A 3 percent growth predicted by the Finance Ministry and analysts for this year was seen by many as too optimistic. The recent revision of export competitiveness of the Czech economy makes the forecast sound much more realistic.

"I would say that for instance development in the labor market does not need to be necessarily so bad as it was recently assumed. Obviously the unemployment rate is likely to go about 10 percent in the first quarter of the year but if we really see the GDP growing roughly 3 percent in 2003 I would say having the unemployment rate at double digit area would be only temporary."

Mr. Jac says that the new figures mean that the 2.5 percent GDP growth in 2002 indicates a success for the Czech economy hit by heavy floods in August taking into account the appreciation of the crown during the first half of last year and sluggish economic growth in Western Europe. While the economic picture looks bright the mistake of the Czech Statistics Office has damaged the country's image abroad.

"Many people abroad were surprised by the sharp revision and were asking what is the exact situation and the future of the Czech economy and the Czech Republic. I would say that obviously such revisions and mistakes may occur also abroad and in other countries but whenever or wherever they occur obviously it is damaging the image of the respective economy or market among investors because it is increasing the uncertainty about the situation in the economy."

The Czech government reacted strongly to the scandal and Prime Minister Vladimir Spidla called on the director of the Statistics Office, Marie Bohata, to resign. Bohata, who was appointed to the post by president Vaclav Havel, refused to give up her job saying that the mistake is not enough of a reason for her to step down.

"I think that our actions were quite correct and transparent and there is no reason for me to resign. We made a mistake, we admitted to it and we have made some conclusions but I don't think that this mistake is a reason for the resignation of the office management." 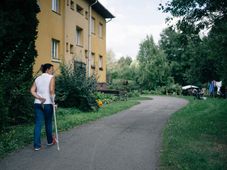