Earlier this month, Zdenek Svestka, a Czech-born solar physicist based in Holland received the Nusl Prize, awarded annually by the Czech Astronomical Society to scientists who have contributed in a major way to the development of astronomy in the Czech Republic.

Less than 5 billion years ago, in a distant part of our galaxy, called the Milky Way, a small cloud of gas and dust began to compress under its own weight. Particles within the centre of the cloud became so densely packed that they often collided and fused together. The fusion process released tremendous amounts of heat and light, which could then combat the compressing force of gravity; eventually, the two forces reached equilibrium. The result is commonly known as the Sun. At a mind-blowing distance of 149,600,000 kilometres, the Sun is the closest star to the Earth.

Our Sun is one of at least four hundred billion stars in the Milky Way galaxy. It has been providing us with its radiant energy for 4.5 billion years, and it is expected to continue to do so for another 3 to 4 billion years.

At the Academy of Sciences in Prague, an award ceremony is taking place. The Czech Astronomical Society are awarding doctor Zdenek Svestka, a Czech-born solar physicist with the Nusl Prize, the highest award given to scientists for lifelong contribution in the field of astronomy.

"For me the award has a special value, because I started my career in the Czech Astronomical Society. I was not yet 20 years old, the war was going on, and I would visit the Petrin observatory at night, I would borrow astronomical books from people there and keys to the rooms with telescopes and sometimes I would show visitors round the observatory when the official guides did not have time."

Those were the words Zdenek Svestka said upon receiving the Nusl Prize.

Since the beginning of Zdenek Svestka's professional career, so many new scientific discoveries have been made and technology has advanced so much that the work of astronomers then and today is in many aspects completely different. Those who remember the old days must be thrilled by the fact that every day they can see fresh images of the Sun taken by satellites which observe the Sun for 24 hours a day. I asked Zdenek Svestka what he thought was the most important piece of technology helping him in his work.

"Well, I think that one very important thing is the existence of satellites, spacecraft, because spacecraft can observe in regions of the spectrum, which we cannot see from the Earth's surface, and this brought quite new information about the Sun and without that we wouldn't know what we know now. And of course, another thing are computers. We couldn't compute conditions in flares or coronal mass ejections and other phenomena without computers where the programmes make it possible to get the results within minutes, whereas before we spent weeks computing it by hand and by some machines which were hand-manipulated or electronic only."

Zdenek Svestka was born in Prague in 1925. When Czech universities reopened after the end of the Second World War, he enrolled to study mathematics and physics at the University of Natural Sciences in Prague. Still as a student Zdenek Svestka was employed at the Ondrejov observatory as an assistant gardener. The young and enthusiastic astronomer quickly gathered a number of academic degrees and continued to promote the development of solar physics at Ondrejov. In 1956 he became the head of the Solar Department of the Astronomical Institute of the Czechoslovak Academy of Sciences. The department soon became one of Europe's leading establishments studying solar eruptions and the Earth-Sun relations. From 1964 until 1970 Zdenek Svestka was the President of the International Astronomical Union.

"Well, I am not back to the Czech Republic actually, I only visit here. I couldn't come here for 21 years, after I left until 1989. I came here first in 1989 and since that time I have come here every year for visits. I was sitting on some committees of the academy, for example. I had some contracts with the academy for some scientific work. I do it at the Ondrejov Observatory and partly at home in Holland."

Zdenek Svestka has received a number of awards and honours: for example the Guggenheim Award in Astronautics in New York in 1968. In 1986 he became a full member of the International Academy of Astronautics in Paris and an honorary member of the Scientific Committee on Solar-Terrestrial Physics in Vienna in 1991. In 1995 Zdenek Svestka became an honorary member of the Czech Learned Society and received a Gold Medal of the Academy of Sciences of the Czech Republic. He is the author of over 200 scientific works, textbooks and monographs.

Zdenek Svestka never lost touch with Czech astronomy and he is glad that unlike some other areas of research - it did not deteriorate during the grim years of the so-called normalisation in the 1970s and 1980s.

"Well, I was very very surprised when I came here in 1989 that there were so many excellent new people, young people. Well, actually the best people disappeared abroad and there was suddenly a gap in generation but still completely new, very talented new guys appeared and they worked here. There is one difference now: 30 or 40 years ago we always published our papers. I don't know any single paper which anybody here at Ondrejov publishes alone. Everybody publishes in cooperation with co-authors from France, the United States, from other countries. They participate in that case on very valuable research."

When astronomers Milos Tichy and Zdenek Moravec discovered an asteroid later numbered 17805 - in March 1998 at the Klet observatory in South Bohemia, they decided to give it the name of Svestka in a tribute to Zdenek Svestka, a Czech-born solar physicist awarded the Nusl Prize for outstanding contribution to Czech astronomy. 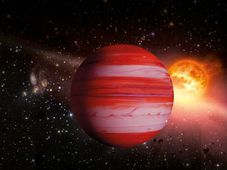 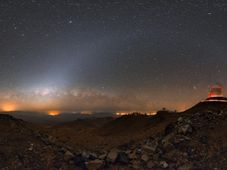