Ota Ulc: from morose nihilism to a New York professorship

In the 1950s Ota Ulc was a young, recently qualified judge. It was a time when Czechoslovakia was under hard line Stalinist rule and he soon realized the huge ethical compromises that such a career involved. He took the risk of an adventurous escape via East Germany. In exile in the United States, he became a highly respected academic, a political scientist at the State University of New York in Binghamton, and Professor Ulc has written many books in both Czech and English. His special interest is in the complex interactions between cultures worldwide, and he has also done fascinating work in mapping the life of Czech communities around the world. Here he talks to Radio Prague's David Vaughan. 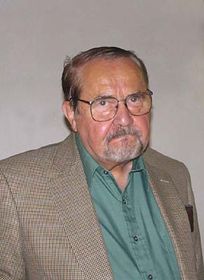 Ota Ulc You've lived for the best part of 50 years in the United States. After all that time do you still at heart feel yourself to be a Czech?

"I've been asked this question several times and my answer is - I feel myself to be a hybrid, because one does absorb the new values, the new experiences, but at the same time cannot extrapolate one's original roots. It is very much to do with language. Though I am able to communicate in English, albeit without ever getting rid of my barbaric Slavic accent with a rolling 'r' a non-existent 'th' and equally non-existent 'w' - I write in it and I lecture at university - nonetheless the ability to express one's persona, to add nuances, irony, style, flair, that is achievable only in one's mother tongue."

To explain how you came to leave Czechoslovakia we need to go back in time to your studies and your upbringing. You were born in Plzen in West Bohemia.

"I was born in Plzen. My father had a car repair shop. In other words he was a manual labourer, but of course self-employed. So there was a stain of the capitalist on him, but it did not really affect me too much. When I was about of an age to enter university I expressed an interest in studying literature, but in those days of the advent of communism, who was interested in literature?"

This was just after the Second World War, at the time when the communists came to power...

"Correct. They sent me to law school. Actually the first book which I wrote in America is called 'The Judge in a Communist State' and the title of the first chapter was, 'The fortunate generation, or how to become a judge without really trying,' because they wanted to replace the old cadres, which were much too stained by their identification with the old regime. So there I was and by the age of 26 I was a district judge."

Were you seduced by your success? Did you feel that you were doing the right thing initially?

"No. We knew from the very beginning. There was never a moment when I would find any identification with the values of the day, with the system, and that means I was in a state of permanent negativism, which doesn't make your life very pleasant. You turn into a kind of morose nihilist."

"Well, on the one hand I was a civil law judge. I didn't have to have anything to do with criminal activities. Nonetheless, even a banal divorce case or a dispute over the ownership of a goat could have a potentially explosive political power, because the litigants have relatives, they have friends, they are affiliated with the party, and I may have some power, but I cannot multiply goats! I have one goat and two parties. Therefore one will lose and the other will win. The loser may arrange that an anonymous letter will be sent to the party headquarters, to the secret police, with the statement that a particular judge is a hidden enemy of socialism, whose purpose is to undermine the socialist foundations of the state - and there it was. You lived with this threat daily."

You decided to find a way of leaving, didn't you?

But it must have still been pretty difficult...

"It was very substantially difficult! The two of us, the other one was a medical doctor, a Jewish survivor of Auschwitz. Imagine the irony. Here is an Auschwitz survivor. He's now running for his life to find refuge with the Germans..."

... in Berlin! You had to start again from scratch in the United States. They didn't recognize your qualification as a judge. It must have been tough, wasn't it?

"Well, I enrolled at Columbia and started to take graduate courses in political science. I specialized in international law and comparative government and had to make some living. But I didn't get any scholarship - ever - because I was not an American citizen, so I did not qualify for financial support for Americans, and at the same time I was not a foreign student because I was an emigrant, you see."

So you had to work your way through Columbia.

With time, how did you career develop in the United States?

"Well, I got my PhD, took off and got my first job in Iowa, and then the opportunity showed up in this place called Binghamton, which is half-way between New York City - that's Sodom and Gomorrah - at one end, and Niagara Falls at the other."

You're a professor of political science, but you're also a writer. Tell me something about your writing.

"The first books which I started to write in Czech were - in part - travelogues, but not entirely. You see the world with the eyes of a Central European and look for commonalities. It was helped by the fact that my wife is from a somewhat exotic, bizarre background. She's half Swiss and half Chinese. So I started to follow the following pattern: racial prejudice - we somehow assume that racial prejudice is an ignominious preserve of the white race, forgetting that it is absolutely universal. She experienced it in China because she was not yellow enough. Children were throwing stones at her. For example, my first sabbatical was a voyage from one place to another where there were these particular tensions between races - for example, in Kenya, between the Indian and black population." 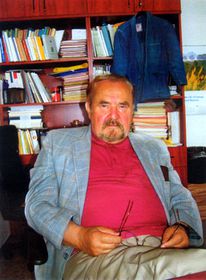 Ota Ulc So you've written about these tensions.

"Yes, I started to write about it."

And you also have family, don't you?

"When our son was born I talked to him strictly in Czech, his mother in Chinese, and with strangers and dogs and cats, he spoke of course in English. So he became trilingual."

And how does he feel today about this complex identity?

"Well, he happens to be at this moment in Prague. He's an established architect, and from the very early days he has had a great infatuation with travel and an identification with all parts of the world."

So for your family today's 'globalized' world is nothing strange or new.