The story of Vítězslava Kaprálová’s is one of a 25-year-old girl who had a career in music of five years. However, even today, 70 years after her death, there are societies and ensembles dedicated to her, her music is still performed and rerecorded and she remains an inspiration to many as a tragic but heroic figure, particularly for many female composers and conductors. Among them is the composer Sylvie Bodorová who studied at the same conservatory as Kaprálová, in Brno.

“Vítězslava Kaprálová means a lot to me. When I was a student I was the only female student, so everyone said ‘you are like Vítězslava Kaprálová, she studied here’... So it was very pleasant. I have to say I admire her, because she was a very, very talented composer and I really appreciate that she didn’t study only composition but conducting as well, because that was my dream as well.”

Kaprálová was born in Brno to a family of musicians near the beginning of World War I. Her father was a successful Moravian composer and pianist who had studied under Leoš Janáček, and her mother was a singer and teacher. It is said that they afforded her little time as a child, maintaining busy professional lives, often leaving her at home alone and sometimes even forgetting to leave food. But it was under her father’s tutelage that her natural gifts came to early fruition, in spite of the fact that he was opposed to her studying music formally. She composed her first piece for the piano, In the Realm of Legend, at the age of nine, and she composed much more in her studies in Brno and later in Prague, showing a natural affinity for musical structure and melody that was honed through excellent academic opportunities.

“She had a fantastic education and came from a good background, and then I think she had a fantastic chance to meet very strong personalities in her life as teachers. Who would be so lucky as to have Chalabala as a teacher, and then in Paris Bohuslav Martinů, Nadia Boulanger, Charles Munch. So there were so many fantastic names... Vítezslav Novák in Prague and Václav Talich as a conductor. So I think it was great for her that she had such fantastic opportunities.”

The first culmination of her exceptional skill and learning came in 1935, when she conducted her own composition, a Piano Concerto in D minor, before a curious audience that was understandably sceptical of the first female conductors they had ever seen, and a 20-year-old at that. She graduated at the top of her class and the sky seemed the limit.

She continued her studies in Prague under the guidance of the two of the most important maestros of the day, the composer Vítezslav Novák, the doyen of Czech modernism, and possibly the most celebrated of Czech conductors, Václav Talich. Her compositions, such as this well known piano piece April Preludes, reached the most important music societies of the era.

Probably even the most talented woman in the 1930s would have had great difficulty in the male-dominated world of music had she lacked a very special personality.

“She was very advanced for her age, and from what I’ve heard from stories she was a very vibrant kind of person, not the kind to be sitting around. She was very enthusiastic and active. And that is maybe one reason why we know so much about her. And because she was so young and because she was female, everyone recognised her and remembered her. So if you want to use that to your advantage then it is an advantage. I think she was able to turn being female into an advantage.” 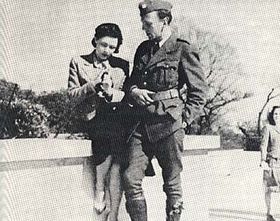 Vítězslava Kaprálová, Jiří Mucha One of those who was enchanted by the spell of Vítězslava Kaprálová was the composer Bohuslav Martinů, who convinced her to continue her studies in Paris rather than Vienna, despite of her poor French, with the offer of his personal tutelage in composition. Their close friendship turned into a deep love. Martinů wrote some of his most powerful work in his emotional turmoil between Kaprálová and his wife, and she composed some of her most refined pieces, such as this Partita for Piano and string orchestra.

A crowning achievement of Kaprálova’s short life, and certainly the one which introduced her artistic talent to the wider world, came in November of 1937, when her graduation composition, the Military Sinfonietta, a reflection of the martial atmosphere of pre-war Czechoslovakia, premiered in Prague’s Lucerna Hall. Leading the 100-piece Czech Philharmonic was 22-year-old Kaprálová herself, in the presence of President Edvard Beneš, to whom the piece was dedicated. A year later she would conduct the piece again to terrific acclaim before the International Music Festival in London, where she conducted the BBC Symphony Orchestra.

Vítězslava Kaprálová saw her homeland for the last time at the end of 1939, after the Germans invaded the Sudetenland. Her relationship with Martinů became all the more important in that separation and they began making plans to leave Europe together, but Martinů could not manage to pull himself away from his wife. Alone in Paris, she met a young Czech named Jiří Mucha, the son of the great Art Nouveau painter who himself became a writer of renown. They married in the spring of 1940, and only weeks later she fell seriously ill. As the invasion of France began she was hospitalised with military tuberculosis and moved to Montpellier on the southern coast. There she died at the age of 25.

In 1947, after Kaprálová was posthumously inducted into the Czech Academy of Arts and Sciences as one of only ten women, Bohuslav Martinů wrote the following: “Only rarely have I had the opportunity to encounter such genuine talent with such confidence in the task she wanted to -and was to - accomplish... I was learning along with her, and it was a great joy as well as an experience to see the fight between the soul and the material again. Only rarely have I met someone with such a sharp sense for envisioning a work before it was written down. If you find someone who actually understands how the parts of the whole relate to each other, whose primary interest is in the whole, then you know that you have encountered a first-class artist.”

“It was very difficult for her because it was the beginning of the Second World War and the situation must have been in the air even beforehand. So her Military Sinfonietta is part of this Atmosphere as well. And I am sure that if she had not been so unlucky as to live in such a period then she would not have had to die.

“She was very, very talented, and I feel very sorry that she died at the age of only 25. It is very clear that we lost a lot - not only did Czech culture lose a lot, but European culture lost a lot by her death.”