Welcome to Czechs in History. The 16th and 17th centuries in the Czech lands are sometimes called 'the times of darkness': as the Hapsburg's grip over the Czech Kingdom tightened, the Czech nation experienced religious oppression and German replaced Czech as the country's official language. However, this period produced several outstanding personalities in the field of art, and one of them was the painter Karel Skreta. By Alena Skodova.

In Prague Skreta achieved the impossible: in countless court proceedings, which made him unpopular among his friends, he won back almost all of his family's property that had been confiscated after they fled the country. He died in 1674 in Prague as a very rich man. To place Skreta into an international context, who were his most famous contemporaries? - was my next question for Dr. Vlnas.

Listen in RealAudio
Skreta would probably not have remembered his father, because he died when little Karel was only three years old. The boy was placed into the care of his uncle, Pavel Skreta, who, following his brother's testament, enabled his young nephew to obtain a broad humanistic education. Young Karel spoke Latin, German, Italian and French, and this knowledge proved very useful in the young man's adult life. But the Skretas were Evangelists, and when at the battle of the White Mountain near Prague the Czech Evangelic nobility was defeated once and for all, the Vienesse court started to re-Catholise the Czech nation by force. This fact was reflected substantially in the fate of many Czech families, including the Skreta family. But as we hear from Dr. Vlnas, against all the odds, Karel's fate was not a sad one:
Listen in RealAudio
Listen in RealAudio
Listen in RealAudio
Related articles 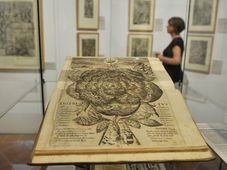 A new exhibition entitled ‘A Hidden Face of Baroque’ opened on Thursday at the National Gallery’s Kinský Palace in Prague. The show… Karel Škréta – His Work and His Era opens in Prague

This week saw the opening of a major exhibition in Prague of the work of the great 17th century Bohemian painter Karel Škréta, a show…