Karel Kramář earned his place in history as the first prime minister of Czechoslovakia. But his political career spanned more than four turbulent decades. We look at a life than included a death sentence, assassination attempt and birth of a new state.

Karel Kramář is perhaps best known for the villa he built overlooking Prague that is now the official residence of the Czech prime minister and as the first holder of that position under the first Czechoslovak Republic.

But he was also one of the dominant Czech politicians in the dying decades of the Austro-Hungarian Empire, during WWI, and right until his death in 1937 at the age of 76.

There is nonetheless the unmistakable impression that the rich, handsome Karel Kramář never really made the full transition to the more popular politics of the first Czechoslovak Republic.

Martina Lustigová is the author of a recent biography of Karel Kramář.

While some of his ideas and warnings, such as the dangers for the rest of Europe of a Bolshevik ruled Soviet Union and the flaws of party politics, seem vindicated after his death. Others such as the pre-WWI blueprint for a Slavic federation dominated by Russia gained little with age.

“First of all, he was really naïve. He had many ideas, his big Slovan empire and such like. But he did not see that some of his ideas were bad and incredible. He always thought that people did not understand him. He could not see mistakes on his side but only mistakes on the other side.”

Karel Kramář was born into a rich family in Vysoke nad Jizerou, in the far north-east of Bohemia. His father had built up a prosperous construction business and textile factory. He was the only one of five children to survive to school age. Thanks to the family’s riches, Karel Kramář was able to travel widely, study law in Berlin, continue his studies in Paris and later London.

While studying in Vienna in 1887 he met for the first time with Tomáš Garrigue Masaryk. The following year they helped to form a group called the realists. The short-lived movement decided at the end of 1890 to throw in its lot with the established young Czech political party which called for a more active pursuit of Czech rights within an Austro-Hungarian empire which favoured German and Hungarian speakers. Part of the deal was the promise of three seats in the Vienna parliament. Karel Kramář was duly elected in March 1891.

For Kramář, a more momentous event had already occurred a year earlier: his first trip to Russia and a meeting that was to change his life.

“This first journey to Russia was really, really important to Karel Kramář because he met there his future wife Nadezhda Nikolojevna Abrikosova. Nadezhda was married and it was a really, really big problem for Karel Kramář and Nadezda. She had to divorce and this took 10 years. Ten years to divorce and marry Karel Kramář. He went to Russia really often and he loved Russia, Russian nature. He built his weekend house there. It was not a small cottage but a really big house and he spent almost every summer there until WWI and almost every holiday when he was an MP.”

In the Vienna parliament, Karel Kramář quickly made an impact despite his youth. He was an eloquent speaker in German, the language of the Vienna parliament. On the main issue of the day, the question of how to reform the multi-lingual and cultural empire, Kramář’s answer was for a more federal arrangement in which the Czechs would play a leading role as the most advanced Slavic nation. This, he argued, would strengthen not weaken the empire. He did not call for the replacement of the monarchy and was only converted to a republic when it appeared inevitable at the end of WWI. The Young Czechs took a more moderate line of seeking to reform the empire rather than overthrow it.

Nonetheless, on the eve of WWI, Karel Kramář was working in secret on plans for a Slav federation. The idea was that this federation would encompass Poland, Bulgaria, Serbia, Montenegro, the Czech lands and Russia. It was envisaged as a constitutional monarchy headed by the Russian tsar with a council and parliament in which Russian representatives had a majority. The fact that this idea would clearly not be accepted by the Poles did not seem to matter to him. Karel Kramář had developed a deep dislike for them in any case which almost rivalled that for Germans.

Karel Kramář hoped that the federation would be realised with Russian victory in WWI.

That hoped-for-victory failed to materialise. Instead, Karel Kramář, by this time one of the leading members of the Czech resistance at home cooperating with Masaryk and Edvard Beneš abroad, had the Austrian authorities to thank for pushing him to the forefront of Czech national aspirations. He was arrested in Prague by police in 1915 and put on trial for together with the future Czechoslovak finance minister Alois Rašin for treason. It was perceived at home not as the trial of a few leading politicians but that of the whole Czech nation.

The charged were found guilty and sentenced to death. Fortunately the verdicts coincided with the death of the long-time emperor Francis Josef and the unwillingness of his successor to start his reign with executions to his name. Kramář was released in mid-1917 but only after signing a declaration that he would abstain from political activity. That soured his later relations with Rašin who refused to give such an undertaking.

Kramář was nonetheless a national hero and symbol of resistance. As such he was elected the chairman of the national committee in 1918 and as the war drew to a close was chosen by domestic and foreign resistance leaders to be the country’s first prime minister at the same time as Masaryk was selected as president.

But top positions in power only succeeded in distancing the former friends from each other even further.

In Janury 1919 an attempt to assassinate Kramář was made by the 17-year-old son of a National Socialist member of parliament. The prime minister was only lightly wounded by the bullet which was braked by the heavy winter coat he was wearing and a holder containing his money and papers. A joke went around that the thickness of Kramář’s wallet had saved him.

The Paris Peace Conference of 1919 was a personal disaster for Karel Kramář. He left in January as prime minister and returned as a disillusioned backbencher. At home, local elections in June were a victory for Socialist parties with Kramář’s National Democrats getting just under 10 percent of the vote. His government resigned with the still absent prime minister told of the fact only later. At the peace conference he had played less of a role than he expected and did not understand the need for the patient committee work that Edvard Beneš excelled at.

From then on, while Karel Kramář was still the head of a party ― albeit one that was identified with rich Czech industrialists and appeared increasingly unable to win broad popular support ― his greater ambitions would be frustrated.

In later years Karel Kramář’s consistent desire for party politics to take second place to national goals, his absolute opposition to Bolshevism and a resurgent Nazi Germany caused him to praise Benito Mussolini’s Fascist Italy. But Martina Lustigová rejects the Fascist label being attached to Kramář. 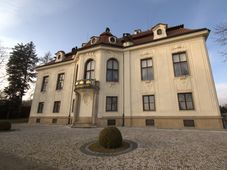 The official residence of Czech prime ministers, the Kramář Villa overlooks the Vltava from a wonderful vantage point between Prague… 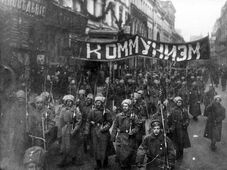 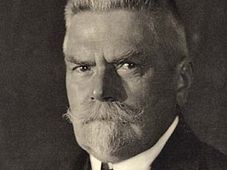 Karel Kramář earned his place in history as the first prime minister of Czechoslovakia. But his political career spanned more than…