It's time now for this week's edition of Czechs in History, and this week Nick Carey takes a look at the life of nineteenth century historian and politician, Frantisek Palacky.

Frantisek Palacky is often called the Father of the Czech Nation. He pleayed an important role in Czech National Revival in the nineteenth century. He also defended the rights of the Czechs, the Slovaks, and many other Slavonic peoples, including the people in his native region of Moravia...

Frantisek Palacky was born in the East Moravian village of Hodslavice on June 14th 1798, the son of an evangelist teacher. His family was part of the very small Protestant minority in Moravia, which was predominantly Catholic, and it was due to a lack of Protestant educational facilities in Moravia, says historian Doctor Jiri Koralka, that he was sent away to study:

Frantisek Palacky originally promised his father that he would become a priest, and he studied theology at university in Bratislava. He was, however, a man with a strong Czech national conscientious. At the time, the Czech National Revival, a movement which aimed to revive the Czech language, culture and history, was in full swing. He decided to become a historian to aid this process, even though this was not a field he had had much experience in.

In 1823, aged twenty-five, Palacky moved to Prague, where he began his career as a historian. He worked first as the chronicler for individual noble families, such as the Counts of Sternberk. These chronicles met with great success. During the 1920s, the Austrian Habsburg Empire worked on centralising power. As a counter-measure, the nobles in various countries around the empire appointed their own historians to further their national interests. The nobles in the Czech Lands approached Palacky, and offered him the post of historian of the Bohemian estates. He accepted, and held the post until his death in 1876.

Another source of tensions between Palacky and the other members of the Czech National Revival was the fact that although he himself was not a nobleman, he moved in aristocratic circles.

In 1825, at the age of twenty-seven, Palacky petitioned various members of the aristocracy for support for a significant project for the Czechs. Jiri Koralka:

Frantisek Palacky was always a hard working man, both in his historical research, and his work to promote Czech sciences and culture, both at home and abroad, plus informing the Czechs of world events. This brought his academic career to its high point:

Frantisek Palacky began work on a Czech language version of his history of the Czech Lands in 1948. This was the year of revolutions and national uprisings across Europe. Due to his importance as a prominent academic, Palacky took a leading role in the Czech uprising, but not at first. Historian Jiri Koralka again:

This brought Palacky to the forefront of active politics in Central Europe. He was invited to attend the German National Assembly in late 1848, but as the German national movement was in favour of making Germany and the Habsburg Empire into one large German state, his answer was negative:

Frantisek Palacky put forward his own plan for a federal Austrian state. This placed him in a unique position, not only for the Czechs, but for many of the other Slav nations in the empire:

The political freedoms that started in 1848 were brought to an end in 1850, when the Habsburg Empire restricted national aspirations in Central Europe, during another period of centralisation. Palacky was banned from all of his public activities, except his post as the historian of the Bohemian estates, and he was constantly followed by the Austrian secret police. Forced to retire from public life, he devoted himself to research. Historian Jiri Koralka:

In 1860, when the political situation relaxed once more, Frantisek Palacky was offered a seat in the Upper House of Parliament in Vienna, and a title. He refused both, and preferred to remain in Prague, where his position was more of a spiritual one than a political one.

Throughout the 1860s and the early 1870s, Palacky continued to work on his history of the Czech Lands, completing first the German version in the 1860s, and then the Czech version, which he finished a few months before his death. Frantisek Palacky passed away on May 26, 1876, aged seventy-eight.

With so much activity throughout his life, as both a historian and politician in a crucial period in Czech history, there is one question that needs to be asked: 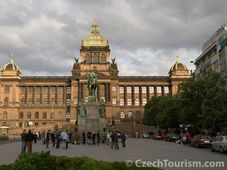 The historic building of the National Museum overlooking Wenceslas Square is undergoing a major renovation that is set to end in 2018.…