Český Dub in the Middle Ages

For this week’s Czechs in History I’ve brought you somewhere rather special – one of my favourite places in the Czech Republic – Český Dub. And I’m sitting here at about 10 at night, exhausted after a hard week’s work, just about to go to sleep in the local museum, which is all rather scary and exciting because there are things like suits of armour downstairs, which I am hoping won’t come to life when I switch the lights out. And I owe this visit here to the fact that, tomorrow morning, I have a meeting with museum’s curator, Tomáš Edel, who is going to tell me about the very important medieval significance of this otherwise not very remarkable town of around 3,000 inhabitants. So, I look forward to that after a night of ghosts and creaking floorboards in the museum.

The Johanite monastery Thoroughly refreshed after an uninterrupted night’s sleep, I met my guide Mr Edel. Our first stop was also the first big medieval find to be made in the town in recent years – a 13th century Johanite monastery, discovered in the early 1990s. From the outside, the building doesn’t look much like a monastery, in fact, you can see why Tomáš Edel calls it ‘the oldest block of flats in the world’:

“People lived here until the early 90s. We looked for this monastery for years; I was looking for it when I was a child at our summer cottage nearby. I was fascinated by these accounts of a lost Johanite cloister in the neighbouring town. I just thought ‘it’s impossible – how could a monastery, a stone monastery, which Charles IV stayed in, have just disappeared?’”

But disappear it did when, over the centuries, building after building was constructed directly on top of it. The monastery is currently clothed in a 19th century façade. So what gave the game away?

“We started to do some research after communism fell; the Central Committee in Prague hadn’t been too keen on us trying to dig up a Johanite monastery. So, after ’89, we did a few archaeological surveys and found a couple of bits of wall from the late Romanesque period, and that gave us an inkling that there was a cloister built around 1250 somewhere in the vicinity.

“And we started to close in on the source of these remains, and there stood a big block of flats. There were a few old women living in here, chickens running around, and a dachshund or two. And we asked these old women, ‘excuse us, but would you mind us taking a look at your basement?’ They eyed us with suspicion, because they had a few potatoes down there, but finally they let us in. And we took a sample of the walls and found medieval vaulting in this potato store.”

The building is today a museum. The medieval vaulting has been restored and traces of the building’s development beyond the year 1300 also remain – from the Renaissance brick platforms put up when the place became a beer store, to a set of 19th century doors which decorated someone’s home. But the cloister was only the start of Český Dub’s medieval haul…

Hundreds turn out in May to catch a rare glimpse of an even rarer golden cross. The 13th century artifact is inlaid with Baltic amber and other precious gems. It is even said to contain a bit of Christ’s own cross. Oddly, it was found buried with a woman in her tomb. On the site of the discovery, now a windswept open space in downtown Český Dub, Mr Edel tells me more:

“It is here that we discovered a woman’s grave, she was certainly an aristocrat, and most likely a Markvart, because the Markvarts were the founders of this monastery. Towards the final days of John of Bohemia’s rule, she was buried here in this newer wing of the building. And evidently, she was buried with the family treasure – with this 150-year-old cross. And this is quite an amazing discovery, because nothing of the sort has ever been found in someone’s tomb.

“There are only two of these crosses in the Czech Republic, the other one is in the safe at St Vitus’ Cathedral. And now we have this second one. In Europe there are perhaps around thirty of these crucifixes in total.”

So why does Mr Edel think that the cross was buried with this woman in an unmarked, and therefore un-plundered, grave?

The Johanite monastery “We know she was an aristocrat, but she could have also been a close relative of Havel of Nymburk who was the head of this monastic order, and whose home monastery this was. So for this close relative they could have behaved in this exceptional way. But why was she buried with the cross? We don’t know, we can only guess that maybe she had no children, and that this family treasure was buried with a line of the family which could go no further. But we are really getting into the realms of fantasy, and sounding like the writers of some historic novel, by now.”

Back in the relative warmth of the Český Dub Museum, the tireless Mr Edel shows me his third big find. It’s a cabinet from the 15th century, painted with scenes from the Old and New Testament on the right, and fearful creatures like griffins and dragons on the left. Upon finding this artifact, Mr Edel realized, and proved, that stencils were used throughout medieval art. But that’s not all: 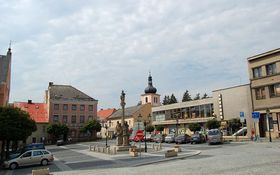 Český Dub “We realized that these stencils were big, and that the cabinet was in fact too small for them. It became obvious that these stencils were made to cover a bigger space than just this furniture. They were made to decorate people’s interiors. And then one time I was in Bavaria, where I found a photo of a painted ceiling in some manse. The description said that it was a late medieval painted ceiling, but something didn’t seem right. So I took the stencils that we had made to recreate this cabinet – our deer, our griffins and so on – and I placed them against the ones painted on this Bavarian ceiling, and we saw that they had been painted from the same stencil.”

So, there’s proof that a roving stenciller was wandering around this part of Central Europe in the Middle Ages. And proof of what Mr Edel calls one of the first forms of mass-production, dating from the time before the printing press. And all this from Český Dub – not bad for a town otherwise famous for umm, being close to Liberec…

Karolina Svetla is most famous for her novels and short stories about life around Jested, in the North Bohemian hills. Her work has…