Southern Moravia is an especially attractive part of the Czech Republic to visit in the summer and autumn months, full of gorgeous scenery and magnificent castles. Recently, I visited Bitov, whose history goes back to the 11th century. Near the Czech-Austrian border, the castle got its name from the Latin "Vetus via", meaning "old road", signifying an historic route along the Dyje River to its confluence with the Zeletava. Built on a dramatic promontory, the castle overlooks deep forests and wide hills. The castle's majesty is reflected on the shimmering surface of the water many dozens of metres below. 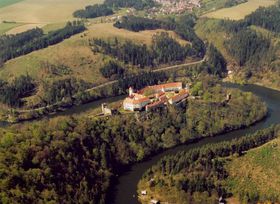 Bitov Castle, photo: Oficial web site of Bítov Castle The original Bitov - a wooden fortress - was first established by Premyslid Prince Bretislav I, forming a link in a chain of castles protecting Slavic lands. During the 13th century the site then saw significant transformation. Guide Stanislav Celetka tells me about the castle's oldest surviving section.

"Well, it is the blade tower just off the courtyard, from the 1330s, one of the oldest, a very old castle."

Throughout its long history Bitov was transformed by a number of different noblemen and rulers. When the royal Premyslid line was broken, the castle was acquired by the Lichtenburk family, who added military defences, tore down an earlier part and rebuilt the castle on a higher section, adding a church, as well as a family chapel. For strategic purposes, the Lichtenburks then also built a sister castle not far off: Cornstejn, ruins now, ruins actually for the last five hundred years.

Cornstejn was destroyed in the 15th century by the Czech ruler King George of Podebrady, who defeated the Lichtenburks for rebelling against his rule.

Stanislav Celetka says another important family in the history of Bitov then was:

"The Jankovsky family of Vlasim in the 17th century joined the castle's separate buildings into one early Baroque castle palace. Then, another very important family were the Dauns. The castle came into their possession in 1755 and they rebuilt the whole thing in Neo-Gothic style."

As is always the case with 900 year-old castles: many different families left their own imprint on the design. Stansislav Celetka takes me around some of Bitov's most majestic rooms. 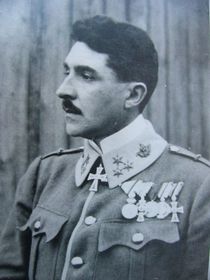 Baron Georg Haas junior "Now we are in the dining room and the interesting thing about this room is this stove, which was made at the end of the 19th century, decorated by pseudo-Gothic ornaments."

"Furniture in this room is from the 1860s. It is Neo Gothic. Almost everything in this castle is Neo Gothic or Neo Baroque."

"We may see paintings by Romantic painters from Austria and Germany."

"This is the smoking room: you may see a set of porcelain, an old Hass production. The Haas family were co-owners of a famous porcelain manufacturer, one of the oldest in the Czech lands."

If you caught the Haas name there, keep in mind they were the last family to own Bitov, right up until 1945. And, it just so happens that one of the very most interesting rooms I was able to see was a favourite of Baron Georg Haas junior, the castle's very last resident. On first sight it's more than a little surreal: on entry one sees a room full of dozens of stuffed, very dead dogs. It takes some convincing but my guide tells me Haas wasn't morbid: he simply loved his pets and wanted them to always be around. Photo: Jan Rosenauer Guide: "They died and after that they were stuffed."

Jan: Ugh, I don't known what to say, I've never seen so many stuffed dogs.

Guide: "Oh, it's a main attraction especially for small children."

Georg Haas was an eccentric a baron as they come. But, for all his quirks, he did put the castle to good use. He designed a magnificent zoo, unique for its time, with terrariums, bird cages, and various paddocks that he filled with exotic creatures from around the world, some of which, yes, were later stuffed.

But, the creature that held the greatest place in his heart - alive - was a lioness. Amazingly, the baron had her shipped to Bohemia, and that's not all: the story goes that he and the big cat lunched together everyday.

The lioness, who believe it or not was named Mietzi-Mausi, liked to chew on visitors' shoes. In a way, what could have been appropriate than a Czech lion - a symbol of Czech statehood - but, under such conditions what could also be more bizarre?

Still, despite his weirdness Baron Haas was well-liked in the region: the locals with whom he mingled, if not the nobility. He often picked up the tab at the local pubs. He was in every sense of the word, a bon vivant: he had a huge love of life and records in the region show, a very healthy sexual appetite. Many village girls fell under his seductive eye.

But, ultimately Haas suffered a tragic fate: an antifascist during the Second World War, he was nevertheless an ethnic German: he was given 24 hours by Czech partisans to leave everything behind. By this time, aged 68, he was forced to depart on foot across the Austrian border. He was later found dead: he had shot himself. 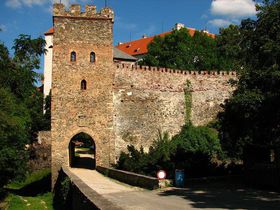 Bitov Castle, photo: Vlasta Gajdušková Hass' may be far from the only story Bitov Castle has to tell, but surely it's the most unusual.

Guide: "{laughing} Don't look for meaning in this."

Jan: "Well, I have to comment this, this is an amazing display of cats and are those mice? Squirrels. Squirrels, cats and... badgers. The cats are all wearing different hats on their heads, and it looks like the squirrels are drinking beer..."

Jan: "And one of them is wearing a fez."

Yes, you guessed it, more stuffed animals - this time in quaint 'parlour scenes'. What a contrast to the impression one gets from the rest of the castle: armour, weapons, wooden panelling, the Baroque, intricate and serious designs. But, it seems appropriate that at Bitov the last word is held by the inimitable baron. No clichéd tales of damsels in distress and shining knights and haunting white ladies here: at majestic Bitov Castle stuffed dogs sit and wait. For the unlikely return of their long dead master Baron Haas.