Motifs from traditional Moravian folk dress, known as ‘kroje’, are enjoying new popularity in modern fashion, both casual and higher-end. A number of artists and designers have taken inspiration from folklore and updated motifs for the present-day. They hail largely from parts of Moravia where folklore still plays an important role in the Christian calendar, annual events including historic processions and celebrations such as the wine harvest. 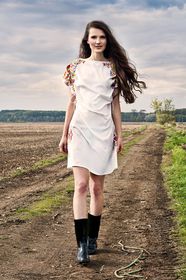 Collection Synek-Kramářová, photo: Zora Vláčilová / Folklor Moderní Slovácko One artist with a deep interest in folklore is Vendula Pucharová Kramářová, who introduced folkloric elements in a new collection of clothes and accessories in a project with fashion designer Krystína Synek and Markéta Bartáková, involved in folklore promotion. The young artist Vendula Pucharová Kramářová told me more:

“The idea was Markéta Bartáková’s, who applied folklore in design, creating ‘mini’ folk dresses, for example, for bottles and other items and she wanted to come up with something else which would express a love of traditional folklore and ornament. She opted for fashion with the aim of creating something young people can wear today.

“She got in touch with me on the basis of my thesis and after hearing I had already worked with traditional ornament. We, in turn, addressed fashion designer Krystína Synek. She designs the clothes, while I do the ornament and Markéta provides the direction and leadership. Each does what they’re good at.” Collection Synek-Kramářová, photo: Zora Vláčilová / Folklor Moderní Slovácko Traditional motifs in folk dress, as well as folk architecture, have their roots in a celebration of nature and the seasonal cycle, passed on from generation to generation.

“I think that the primary inspiration is and was nature, celebrating cycles of life such as the reaping of the crops, the harvest, you can see little pears, apples, birds represented and more. Nature is the cornerstone. In architecture, ornamental motifs above the doorway or around the windows, for example, ‘protected’ the inhabitants inside from evil spirits.

“Women who specialized in the craft of designing ornaments were called ‘malérečky’ and the craft was taught to their granddaughters who continued the tradition.”

Before she applied folklore motifs in fashion, she used them in her artistic work. As an artist Vendula Pucharová Kramářová says does not distinguish between the use of ornament in painting and in other forms. 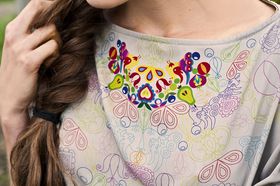 Collection Synek-Kramářová, photo: Zora Vláčilová / Folklor Moderní Slovácko “The use is similar. My work is similar to illustration – I also illustrate children’s books – and each painting in the past series represented a single traditional folk song. I think the use of ornament in my artistic work, as a magical element, plays a similar role as in the fashion items we have produced – shawls, tops, and other items.”

Another group of folklore aficionados, known as the Šohaji s Kyjova, hailing from Kyjov in Moravia (Šohaj translates as the archaic swain in English, referring to a suitor but also peasant or shepherd) opted to found a secondary business celebrating folklore traditions. They designed and printed T-shirts with traditional motifs, which have proven to be very popular, as well as a T-shirt expressing the simple slogan and logo “I love folklore” to spread the word. I spoke to one of the suitors from Kyjov, Tomáš Jeřela, who explained the idea behind the business as well as how important folklore was for him.

“Folklore has a really long tradition in our country and in our region of Slovácko it’s in our hearts and in our blood and it is something that is very important for many of us. Many of us in Moravia like dancing and singing and wine and really… I moved back this January after living in Prague for three years and no regrets. 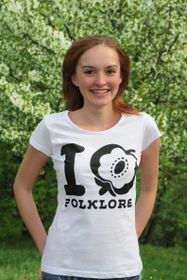 Photo: archive of Šohaji z Kyjova “The idea was to print shirts using the original motifs to be able to wear them casually and my friend Martin Zrzavý made it happen. He came up with the visual concept and in the spring of this year we opened our own e-shop and the shirts have proven very popular since.”

RP: Have they attracted attention beyond Moravia or other parts of the Czech Republic?

“Yes. We have had orders from foreign countries as well. I think the attraction goes beyond the Czech Republic, although being a fan of folklore is important. That is part of the message as well: we have shirts saying ‘’I love folklore’ and we are trying to connect with others who feel the same. The aim is to share the idea, and to be proud of traditions. I think people want to hang on to old traditions and we updated them so people can keep them in ordinary life and not just at feasts and other events.”

Annual events where locals and visitors experience real folklore – that is the original folk costumes, music, dancing and plenty of food and wine, are equally important – and say folklore lovers need to be experienced. Tomáš Jeřela pointed out that one such event will soon be coming up.

“I want to invite everyone who can to attend festivities in Kyjov which will take place on November 7th. Hope to see you there!”

Vendula Pucharová Kramářová agrees that experiencing something like that first-hand is important. 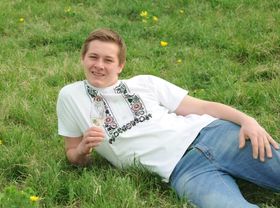 Photo: archive of Šohaji z Kyjova “This is something everyone needs to be experience at least once! When I travel abroad I also try to find out about local traditions and to get a peek behind the curtain, to learn more about the local culture. I think many people feel the same way, they want to get to know others better. In Kyjov you have Slovácky rok every four years where everyone puts on their traditional dress and comes out on the main square and even the horses have ornaments. It is an experience that really grabs you by the heart.” 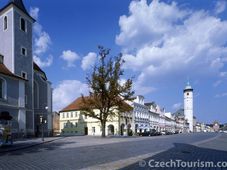 The Chods – the king’s frontiersmen

In the Late Middle Ages, a group of Czech frontiersmen were charged with guarding the kingdom’s western borders. In today’s Czech History… 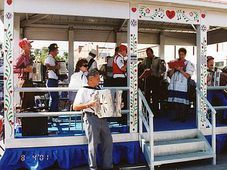 Wilber, Nebraska, is a hub for Czech-Americans, and was appointed 'Czech capital of the USA' by congress back in 1987. Over the 3rd,… 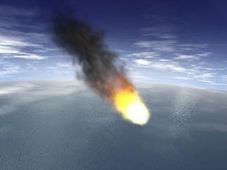 Astronomers have called off the hunt for a precious meteor. Need a regional costume from Bohemia, Moravia or Silesia? We know where…