No regrets - the life of war bride Lillian Schořová

The previous episode of Czech Life featured the first part of Lillian Schořová’s life story. The 92-year-old Englishwoman is one of the hundreds of English war brides who went home with their Czechoslovak husbands after the war. Lillian came to Czechoslovakia with Josef, a tankist from the armored brigade who was stationed in the United Kingdom, in 1945. In this episode, she talks about her life after the war, her difficulties learning Czech, her unusual career and how she feels today, looking back on all the ups and downs of her adventurous life. 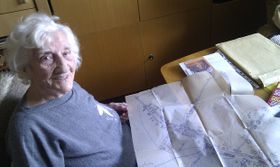 Lillian and her route as a post woman When Lillian Pipps met her Czechoslovak husband-to-be Josef Schoř in Stratford-upon-Avon, he did not know a word of English except “please” – but he learned quickly so that he could take her out on a proper date. After the couple got married and relocated to Josef’s native Czechoslovakia in 1945, it was Lillian’s turn to learn a new language.

Because she did not speak any Czech at first and Josef had been wounded in the war, Lillian took a job sorting coal at a coalmine in Most, where the couple had settled with their daughter Anna, who was born in January 1942. During her shifts at the coal mine, the young mother did her best to learn Czech, but it was not easy for her to master the new language.

“They were very difficult years, and especially the language. In English, we only have four cases, the Czechs have seven, whatever for I don’t know. The language… well, it was terrible. But at the coalmine, of course, I started learning, with my dictionary, and I used to write down 10 words to learn for my morning shift, which was from 6 until 2 in the afternoon. And then we had our lunchtime, and after that, my colleagues tried me out.”

Sometimes, her problems learning Czech resulted in quite humorous situations, Lillian says. It was difficult to keep all the new words she had learned straight, especially if she worked a long night shift. 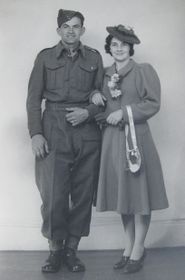 Lillian and Josef “And at the beginning, I must tell you this, I made so many mistakes. Instead of saying the formal you, vy, to everyone, I was using ty with everybody. Until my mother-in-law heard me, and she was very cross, she did not like it that I didn’t spoke Czech. Well, that is all gone. I had some very difficult times, and I made some mistakes, too.

“As I told you, at the coalmine, I learned ten words during my morning shift, and then in the night, because I was alone on the chains, I learned 20 words. And one evening, I was studying words that started with the letter K, kitchen and so on. And in the morning, I went to the store and ordered bread, and instead of saying I wanted a kulatý chleba, a round bread, I ordered a kalhotky chleba, a knicker bread. But I learned a lot of what I knew in Czech from making mistakes.”

Lillian was not one to be discouraged by the difficulties her life in a foreign country posed and took setbacks in stride. In 1947, her son Robert was born, and after one-and-a-half years of doing the dirty and strenuous work in the coal mine’s sorting shaft, she was moved to the accounting department. Of course, her husband was also a great help to her during those first years, and he tried to teach her Czech, too – especially romantic vocabulary.

“Of course, Josef taught me very soon how to say I love you and give me a kiss in Czech.” 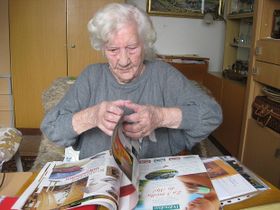 Lillian Schořová And how do you say that?

But despite her sunny disposition, Lillian did struggle at times. Josef was given a very low pension and was increasingly frustrated that he could not financially take care of his family. Often, the situation at home was tense. Lillian says that instead of the military honors the Czechoslovak state gave him, she would have appreciated a higher pension for her husband.

“I said, if they had kept these papers and given him, when we needed the money when the children were small. Instead I had to work at the coal mine. I don’t mind though, I was quite happy there.”

Aside from the meager pension, Lillian and Josef, unlike many couples in a similar situation, did not get to feel the wrath of the communists. Josef was never imprisoned, and Lillian was only called in for interrogation by the police once.

“I was called in to the Litvinov police office to be interrogated, and they thought that perhaps I was a spy. And I told them that I wasn’t a silly person but that I wasn’t clever enough to be a spy, and that was all ok after that.”

Lillian’s fate should take a turn for the better in the early 1950s, when she was given what she still describes as a wonderful opportunity. The local post office needed someone to help out covering their routes, and Lillian was just the woman for the job. 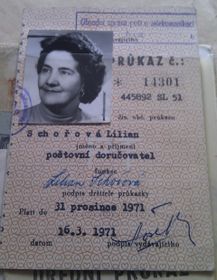 Lillian's postal worker ID “Then in 1951, I started as a post woman. And as a post woman, I worked for 25 years, but on a huge route. I got it here still. Then, of course, Josef died in 1974. And I helped out when somebody needed me to at the post office. Some of the post women had to go to the doctor’s, to the dentist, and they wanted someone to do their route. So they phoned me and said: ‘Lilinko, will you do my route tomorrow?’ So I helped out at the post office until 1980.”

Lillian was not able to travel back home often, but she says that after a while, her busy schedule helped her not feel homesick.

“I used to get pretty homesick, but I did not have time to get homesick. Work as a post woman was not just delivering letters, we had to collect radio and TV license fees, and in Lom, there are a lot of flats that belonged to the coal mine, we had to collect the rents for them. We had to deliver all the magazines; they were not in the shops like today. And we had to collect money for them as well, it was a fulltime job. I was lucky that Josef was a good cook, because he had an invalid pension all his life.”

After her husband Josef died in 1974, Lillian took on yet another job, one that she says she enjoyed very much.

“I was a social worker working with children in Lom, because there were a lot of Romové there, I don’t like to call them gypsies. I have a Romany living next door, and he is a very intelligent man. As I said, there were a lot of children in these Romany families, and we had to go check on them, see if they weren’t neglected. And I did that for over 25 years, with my post office job.” 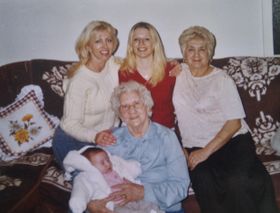 Five generations But her eventful professional life did not end there. In 1981, Lillian moved from Lom, the small suburb near Most where Josef and her had first settled, to Lipno nad Vltavou in southern Bohemia, where she helped out at the ROH, a communist trade union organization.

“And I had not been there long and they asked me if I would take the library over. I was thrilled, I love reading, I love embroidering, and I was never without knitting in my hands. And I said, I don’t know, I help out at the ROH already. And they said, but it is only once a week. So I took that on and I did it for 21 years, and when I was 85, I had to finish because of my eyesight.”

Her fading eyesight became a real thorn in Lillian’s side. When I visited her in her tiny apartment in Lom, to where she has since moved back, Lillian showed me how tidy all the drawers in her house are since she cannot knit or embroider any more. Not keeping busy – that is just inconceivable to her, she says.

“I didn’t have enough money to let our Robert, as I say, he was a brilliant boy at school, but we could not pay for him to go on further, because you have to pay half of the books and what not. But he worked and now he is a pensioner.

So both you and your children are retired? 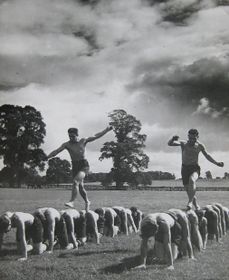 Czech soldiers in England Lillian still makes a point of walking in her apartment building’s corridor to keep fit, and moves through her small kitchen swiftly, cooking tea, pulling out photo albums and chatting about this and that. It is hard to imagine that someone so at peace with themselves would have any regrets, but I still put the question to her.

“No, none. I believe in destiny. I believe what is in store for me will happen. And that is what happened all my life. I keep a good average on everything, be it food or whatever. I’ve got my routine here and it is a small one, but it is my routine.”

This interview with Lillian was recorded in late March. Lillian fell ill in June and died at the age of 92 on June 25th, 2012.