The number of foreigners working in Czech households is on the rise, although there are few exact statistics about this relatively unofficial economic sector. More and more Czechs hire part-time cleaners and live-in nannies from Ukraine, Belarus, the Philippines and many other countries. What happens to them behind closed doors, though, is not a topic many like to talk about. A new NGO campaign to draw attention to the rights of migrant domestic workers decided to take an unusual approach to the matter – recruiting a big-shot ad agency and a glitzy celebrity to help their cause. 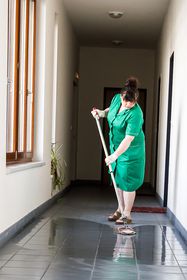 Photo: Vasyl Tsitsey It all began with an invitation to a launch of a new agency with a straight-forward name “Foreign Women for Cleaning Jobs”. The company’s website, looking more like a celebrity gossip site, provided headshots of women holding cleaning tools, with descriptions below, like “Strong and reliable”, “willing to cook for you even at 3 in the morning”, “will not leave a speck of dust in your house”. The website, radio and television host and celebrity Kateřina Kristelová, gathered a lot of criticism, but even more curiosity from the media and the public.

Some appalled by how degrading the workers’ descriptions were, others left comments on Facebook asking about prices and availability. The agency’s launch was a celebrity-filled affair, but the guests were in for a surprise, learning mid-way through, that it was all a hoax, and no such company actually exists. It was all an elaborate plot concocted by two NGOs and an advertising agency to lure in the media, and eventually let the public know about the plight of immigrants working in Czech homes, and what their Czech employees can do to ensure their rights were being respected.

At the party, I spoke to Marie Heřmanová, who is one of the media coordinators for the “Equal rights at Czech doorsteps” campaign, resenting one of the biggest Czech NGOs People in Need.

“The main goal of the campaign was to reach the target group we wouldn’t be able to reach normally – the employers. These are usually rich people, managers or celebrities who often hire migrants to help them in their households. And the main message we wanted to tell them was – it’s okay if you need help with your housework, that’s normal, but you need to be aware that the migrants you are employing are also people with rights, and we have laws and you have to behave according to these laws. So, they should have eight-hour work days, and they are entitled to privacy and to dignity like all other people, like all other workers.“ Photo: Vasyl Tsitsey Domestic immigrant workers is not a topic that people like to talk about or that most media is comfortable in covering in this country. It invades the privacy of people’s homes and can create problems for the migrants themselves. There are few regulations of the working conditions that these cleaners, nannies and caretakers for the elderly face in Czech homes, and behind closed doors these women, for the most part, are especially vulnerable. According to experts in the field, many work 12-15 hours a day, sometimes 6 or 7 days a week, and often cannot take any vacation days under threat of losing their employment.

The number of immigrant domestic workers in the Czech Republic has not been calculated, and because many of the immigrants take these jobs without official contracts or registration, it is almost impossible to calculate for sure. This is why part of the current project is also an attempt to compile as much data on this topic as possible, as Petra Ezzeddine, a professor at the Charles University’s faculty of humanities and the research coordinator of the project, told me at the launch party.

“We have a lack of statistical data to prove the reality, and because it is a new contemporary problem or phenomenon, we are still searching [for solutions] for this problem. And also I assume that the number of domestic workers will grow as our population is getting older, so we need more and more caregivers for seniors.”

Many Western European countries have faced problems connected to domestic employment of migrants for the last few decades. As the population there ages rapidly, and traditional family roles are changing, the local labour markets are increasingly unable to fulfill the demand for in-home help. Immigrant workers are a welcomed support, and it allows the migrants to earn many times what they would have at home. Many countries and international organizations have used the negative experiences they have had to create legal frameworks to avoid violations and exploitation that is often occur in this type of employment.

Ms. Ezzeddine says the Czech Republic is still behind in these efforts.

“I think it is a different situation, because we are still in the context of post-socialist countries. So we are not talking about a large number of domestic workers compared to, for example, France, Italy or Spain, which are typical countries receiving domestic working labour But since we are really a we have no basic laws covering this issue. So this is a difference and we need to work on this issue more.”

The Czech Republic has not yet signed the International Labour Organization’s Convention concerning Decent Work for Domestic Workers from 2011. And local laws have not kept up with the demand of the Czech households. And while contract-free work with under-the-table pay is still preferred by the Czech employers, there are few people besides the NGOs who would lobby for better regulations, to ensure the rights of domestic workers. 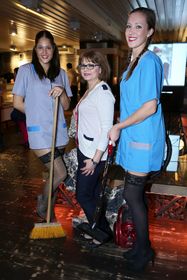 Launch of Cizinky na úklid agency, photo: Official website of the campaign I asked Magda Faltova, the director of the Association for Integration and Migration – the non-profit heading the “Equal rights” campaign, if migrant workers themselves go to authorities to report any problems with their employers.

“Very rarely. They wouldn’t do it, because they cannot afford it. Because if they are working without a contract or a work permit, then their residency permit can be cancelled and they can get an order of expulsion and a ban on returning to the country later on.”

The Association is hoping that the data gathered in the course of the project, as well as the greater public awareness of the issue will eventually help them lobby for better legislation.

“We would like a more open labour market, we have also discussed the possibility of having specific quotas or regulations for domestic workers. There are some positive and some negative experiences with this from other countries, but I think what would help a lot is to make the process of getting the work permit and access to the labour market [easier] for people with different residency statuses.”

The elaborate trick launch of the campaign was the brainchild of large advertising agency Ogilvy, which volunteered its time and creative power to help the project. The creators of the viral pre-campaign wanted to make the fake agency sound scandalous, yet believable enough to get people talking, in the media and on social networks, about how realistic it all was, and inevitably about what people think of immigrants working in the home.

They also realized, they needed to go beyond the classical media and internet outlets which are generally sympathetic to human rights causes. The coordinator of the campaign for Ogilvy, Eliška Flaková, told me that adding the celebrity element was key.

“Precisely because we had a celebrity like Kateřina Kristelová working with us, we were able to reach the tabloid media, which unfortunately most people in this country follow. So this way, we will reach a much wider audience than if a non-profit organization like People in Need were to simply make a campaign video and put it on the internet. This way, the tabloids will have to write something about the campaign, what it is about, maybe what steps people who want to hire a domestic worker need to make in order to respect their rights. What influence it will actually have on the readers, that will be up to each individual.”

The tabloids did end up giving the event and even the campaign very positive coverage. In some cases, the compulsory celeb shots of the various socialites who were invited by Kateřina Kristelová were accompanied by description of how each of them takes care of their house chores – an approach which is both accessible, gossip-like and gets to the core of the campaign.

Ms. Kristelová, who put her name and in a sense reputation on the line to pull off the hoax, jokingly said after the campaign launch, that she did not get away unscathed. 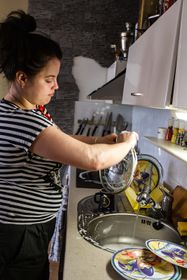 Photo: Vasyl Tsitsey “Yeah, a few of the journalist said that as payback I will have to come and clean their houses myself. They came to the event because they are used to getting vouchers or freebies, and some really thought they will get a coupon for cleaning services for a day.”

But when the party was over, the hard work began for the NGOs behind the real campaign behind the glam cleaning agency. For the public who have already or plan to hire migrant workers to help out in their homes, the organizations prepared a list of ten rules of thumb to use to make sure their employees have the same rights as any other employee under Czech law. The work with the media and the migrants themselves is also continuing with full speed. They are also gathering stories of migrant women who work in households. But getting these women to speak to the media or simply in public is very difficult, as Marie Heřmanová told me.

“This is the biggest problem we are having. We have a few people who are willing to talk, but all of them want to remain anonymous. No one wants to reveal their real identity, real name. It is hard to persuade them, but some of them know that they are helping a good cause if they speak out.”

Voices of those who will be most affected by the campaign certainly need to be heard, but chances that they will always remain in the background of these kinds of efforts are pretty high. But judging by the success of the glamour-filled launch of the campaign, letting the public know about their plight may just work through the most unlikely spokespeople.