Public broadcaster Czech Radio has backed in initiative for a Vickers Wellington bomber undergoing restoration work in Great Britain to feature the markings of the Czechoslovak 311th squadron which flew with that type of RAF bomber in World War II. Czech Radio’s correspondent in London, Jiří Hošek, first learned of the reconstruction project last autumn, and came forward with the idea. What are the chances the plane could feature the colours of the 311th? And what is the aircraft’s place in Czechoslovak military history? Find out in today’s edition. 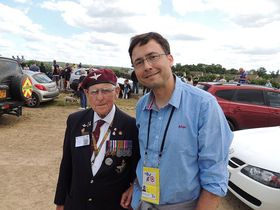 “The significance of this plane is immense and all Czech fans of WWII history I think rank this bomber at the top of their list, along with the Spitfire and Hurricane. The Vickers Wellington was the main bomber, the main aircraft used by the Czechoslovak 311th bomber squadron which was part of the RAF throughout the war. It was during raids on Germany and other targets in western Europe from 1940 onwards. So it is a very famous aircraft and a significant one in Czech military history. Even people in the Czech Republic who are not that knowledgeable about WWII have heard of the Wellington.”

As you say it was a signiature planes of the RAF… what does it look like up close?

“Well, it is a huge airplane but it does not have as much metal or glass as more impressive American bombers like the B-17, not by a long shot. In fact, the Wellington fuselage is still full of wooden framing and is covered by linen. So, when you stand very close you wonder how it could have been so effective up to 1943. It is very robust, it is a twin-engine bomber, but it is not as impressive as some of the other bombers from the latter part of WWII like Lancasters, Halifaxes or Sterlings.” 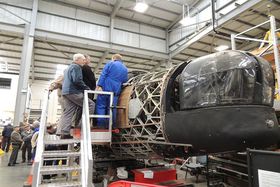 Photo: Jiří Hošek How rare is this particular plane? Is it true that it is the last survivor, so to speak?

“It is the last fully-intact or complete Vickers Wellington. There is another which was recovered from Loch Ness in the 1980s which is in a museum in London. But this particular Vickers is very rare. I hadn’t known about its existence before I visited RAF Cosford in 1914, so it caught me by surprise. The aircraft was not in operational use, but was used only for training towards the end of the war, so that contributed greatly to its condition.”

What happened to other surviving planes? Were they dismantled, destroyed?

“Exactly. After WWII there was a severe shortage of materials in metals, so many were taken apart and destroyed or recovered for parts. There was no thinking at the time that some of them should be taken and put on display at sites around the world.”

The restoration work, even if the plane was in ok shape, must still have been difficult and complex. How do you see the work which was put into the plane? 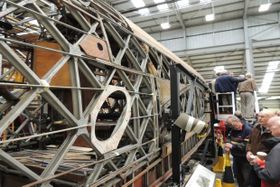 Photo: Jiří Hošek “The work that the restorers have done at the conservation centre at Cosford is extremely impressive. You can imagine what happens to any wooden and metal object which is 70+ years old. We are talking about corrosion, rotten wooden frames, old linen covering the fuselage which needs to be replaced and so on. It is long, painstaking work. But they have worked very hard to make it authentic and look exactly as it did in 1944 or 1945. At points, innovation was required.

“The big question, from a purist’s point of view, is whether they will return the machine gunner’s turret to the plane. That was dismantled as the plane was used only for training. If they opt not to return it, it makes it doubtful they would repaint it with the symbols of the 311th squadron, since the squadron never used this particular plane, it wasn’t used in combat and so on.”

Why do you think it is fitting that the markings of the 311th could be added? Did the Czechoslovak squadron “make” the plane famous? 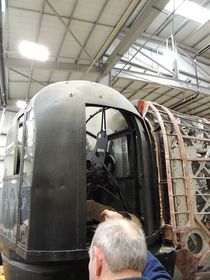 Photo: Jiří Hošek “I think they did. That said, the plane was used by British bomber pilots and Poles and New Zealanders flew with the plane massively. But the 311th squadron was very successful. On numbers of occasions its members won many honours and it was not just a regular squadron. They were among the best. I thought it would be a fitting honour and symbol to the Czechoslovak airmen and other Czechs who fought in WW II in the West. Something acknowledging their contribution to overall victory.”

Who are some who are supporting your initiative, besides Czech Radio?

“There is the British Embassy in Prague, our embassy in London, veteran’s organisations run by many descendants of Czechoslovak airmen… I am glad it received the backing of Prague’s Institute of Military History, which means a lot to me and the initiative. I am also very happy for support from the only British MP who speaks Czech, Greg Hands, which means a lot.”

“It could be within a couple weeks. But for reasons I explained I am not overly optimistic. The team restoring the plane never counted on this variant initially, the proposal is a little late in the day. But we’ll see. We will see – there could be an answer in weeks or months.”