In the previous episode of Czech Life, we brought you the first part of the life story of Ivy Kovandová – one of the so-called war brides, English women who got married to Czech soldiers or pilots during World War II and then followed their husbands back to their native Czechoslovakia. Today, it is time for the second part of Ivy’s story – which starts with her arrival in her husband Oldřich Kovanda’s home country. 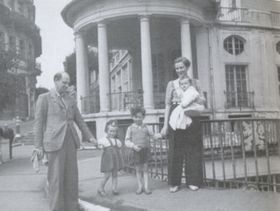 Ivy with Uly and kids in Karlovy Vary in 1948 Ivy arrived in Prague in late 1948. When I recently visited her in her apartment in Prague’s Vršovice neighborhood, she recalled her first time seeing the Czech capital.

“We came in a very old plane, a war plane, and it was pouring with rain. And through the rain, they were playing very beautiful music, very loudly; so that we could it hear it. A good friend of my husband came to pick us up. And he said: ‘Where are you going to live?’ and my husband said: ‘I thought we were going to stay at the Hotel Imperial.’ And his friend said: ‘You can’t go there, I wouldn’t let you. Come home with me.’ So we stayed there with him for five weeks. And then my husband went off to Slovakia, because he had been given a post in the glass industry. There was a new glass factory opening in Slovakia, and they thought he could be very useful there. So we went to Slovakia. And my son Karel was only two and the baby was not even one year old. I had her in a shopping bag. Karel was most interested in the people who got on the train, because most of them were country people and one had a goose in a bag, with just its head poking out.“

What struck Ivy most during her early days in Czechoslovakia, she says, were the poverty of the people and the scarcity of goods. In her memoirs, titled Tapestry – from Suffolk to Prague, Ivy describes what doing the shopping was like during that time. 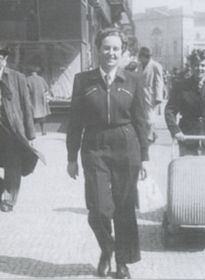 Ivy in Prague in 1950 “With the increasing shortage of consumer goods, the black market was flourishing as it did for decades. There was hardly any fruit, no towels, bed linen or even stockings and little in the haberdashery line but there was no shortage of dress materials and local dressmakers were in great demand; shoes from the nationalized Czechoslovak Bat’a factories were mostly well designed and made to last but there was not a big choice; kitchenware shops were badly supplied, while furniture was on display only. One did not go shopping in those days but searching – searching for anything on sale that might come in handy to exchange with a friend at some later date.”

In addition to the strain of the post-war years that countries across Europe were affected by, Czechoslovakia had fallen under a communist regime in 1948. When Ivy moved there, many Czechoslovak citizens were emigrating. I asked Ivy if she didn’t feel apprehensive about moving to a country run by communists.

“I was a communist and I still hold views that are similar to communism. I was a communist in England already, before I came. So I could see more or less where the good parts of communism were leading. But I couldn’t condone or agree with all the imprisonments that were going on in the name of communism. That wasn’t for me. But that would take a long time to talk about. I’m not embarrassed about it. I still think that under the communists, if there hadn’t been a few elements that destroyed the situation, we’d be better off than we are now.”

Many of the Czechoslovak men who had served in the Royal Air Force and fought alongside the allies quickly came to be seen as enemies of the state. After seizing power in February 1948, the communist regime moved to consolidate its power. Show trials, imprisonments and executions aimed at intimidating the public dominated the 1950s. Ivy’s husband also came in the crosshairs of the StB. She recalls the moment the secret police came to their home in her memoirs.

“The day my husband was arrested, I had made him his favorite lunch. He came home about noon with five strangers. I asked him whether his colleagues would like to stay for lunch. Something was wrong, because he put his hand to his lips implying that he was not allowed to speak. Nothing like this had ever happened before. I did not panic, I just felt dizzy with disbelief. So that when I was told to stay where I was, I did so, thinking that to disobey would not improve the situation. I had no idea they were secret police, until they went from room to room searching and taking every piece of correspondence and any papers they could find.”

Ivy’s husband was then arrested by the secret police. She says that thanks to a lawyer friend and pure luck, her husband did not stay in prison for very long.

“He was in prison but only for a short time, whereas friends of ours and other people were imprisoned for life or executed. But he, fortunately, was not. And neither could we know or find out why he and 12 of his colleagues were thrown into prison but only kept there for a very short time. So we were very lucky that happened.” 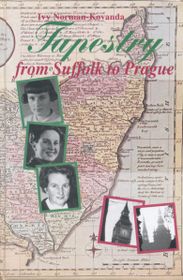 In 1962, Ivy applied for work in the English section of the Czechoslovak News Agency ČTK. She has fond memories of her time at the agency, as she writes in her memoirs, even though the circumstances under which she decided to leave her work were sad and political.

“The friendly and peaceful atmosphere on our second floor was sometimes given as an example to other departments. One November, our Czech London correspondent was sending news about a fog that had brought all traffic to a standstill. Instead of traffic jam, he reported it as a‘traffic marmalade’. Hardly a birthday passed without a party –with hundreds of tiny open sandwiches that had taken several hours to make and a few bottles, all spread out in a temporarily vacated office. But after the Soviet Invasion in 1968 and the following normalization, such socializing ceased. I worked there for 16 happy years and only left because of the invasion, when the harmonious atmosphere changed to one of uncertainty, with growing suspicion of informers and secret police among our colleagues. It was never the same again.”

In her book of memoirs, Ivy recalls the tumultuous days of the 1968 Soviet Invasion. When the Soviet troops arrived Prague, she, as many others, went to the building of Czech Radio. The radio building had drawn many Prague residents who were protesting the invasion and built barricades in front of the station. Czech Radio was broadcasting the news of the invasion – an act of rebellion against the prevalent censorship that soon would be punished, when Soviet forces occupied the radio building.

“Crowds of people were standing around the radio listening intently to a speech broadcast from a balcony of the besieged building. Radio employees were dropping down lengths of string to which notes, news or messages were tied and drawn up to be read out. Farther down the road stood a badly damaged bus with the undercarriage missing, windows broken, full of people sitting in silent protest, almost like a human barrier.” 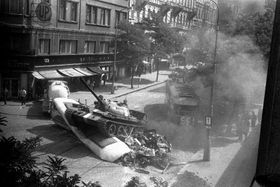 Soviet invasion in 1968 A decade later, during the normalization era, Ivy’s husband Oldřich, nicknamed Uly, suffered a fatal heart attack while on a research trip for a book he was writing. Just a year after his death, in 1978, Ivy received a letter from the German government addressed to her husband, whose father was Sudetengerman. In it was a permit to live in West-Germany that Uly had filed for – such permits were granted to children of expelled Sudetengermans at the time. While the family was bitterly disappointed that it came too late for Uly to live out his life in the country where he felt most at home, Ivy and Uly’s daughter Maria was later able to settle in Germany as a citizen and not as a refugee thanks to her late father’s residence permit.

Even after his death, Ivy remained in her husband’s native land. Throughout her time in Czechoslovakia and later the Czech Republic, she picked up some Czech but admits that her language skills are far from perfect. Still, she says, not speaking the language fluently has not kept her from feeling at home in this country.

I wondered whether Ivy had any regrets – having lived such an adventurous, but at times difficult and sad life. She made sure to tell me that this was not the case, except for one small thing that she would do differently.

“There is nothing I would do otherwise, but I would learn how to drive a car. When I was 60, I took driving lessons, but I realized that I would be a bigger threat to the people on the road than to myself. But I saw that it was not as difficult to drive a car as I thought it was. I’d imagine it gives you an independence that you can’t achieve otherwise. And therefore I regret not having learned that.” 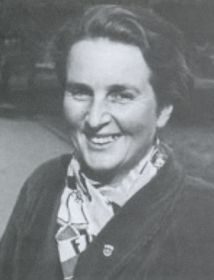 Ivy in 1956 So does she, after having spent over sixty years in Prague, feel like a Czech, or is she still English at heart?

“I don’t do anything much the English or the Czech way. And that is what I call ‘living your life.’ If everybody realized that you have to live your life, and not just live, then they would be much happier and use their time better. Nothing is more distressing than if you ask someone on the street: ‘What are you waiting for?’ and they say: ‘I’ve just got time and I am waiting until it is three or five o’clock.’ I feel that I want to tell them: ‘You are wasting your life, you should never waste time.’”