A look behind the thin walls of Czech panelák apartment buildings

A legacy of the communists’ fascination with the pre-fabricated building method, paneláky or tower block buildings to this day can be found across the Czech Republic, often in prominent and elevated places, towering over cities and towns. After all, they were considered the height of architectural and technological progress during communism.

In Western countries, tower block estates often come with a social stigma and mostly provide housing for economically disadvantaged families. Not so in the Czech Republic, where a large portion of the population still live in such buildings and therefore it is considered a relatively standard, if not ideal, way of living. 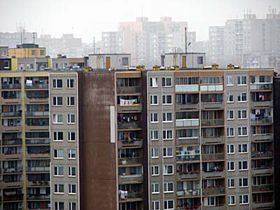 But what does life inside a panelák flat look like nowadays, some forty years after the first ones were built?

Radka Slavátová is a student and young mother. She lives in a panelák building in Prague’s Krč neighborhood, with her husband and her one-and-a-half year-old daughter. Most of the interior of their flat, which her mother owns, has remained unchanged since it was built in 1967.

“This is actually the way it looked, when it was new, nothing was changed in here. So you can see the basin is over the bath, which is not very useful. It’s also very small, and the walls are made of that plastic material.”

When I visited the young family, Radka was nice enough to give me a tour of her flat, and she pointed out some of the everyday nuisances that are part of panelák life.

“In fact, in this flat, the classical walls are just around the flat. And the inside walls are just some kind of plastic, so it’s quite thin and you can hear everything through these walls. And this is what it looked like when it was built [knocks on the wall]. It’s not a wall at all.”

So I guess given that you are a family, within the flat, that might not matter so much, but what about the walls separating you from your neighbors? Have those been redone at all?

“Well, not the walls on the inside of the building. The trouble with these houses, when they built it, they thought they’d have to last for 30 years or so. But now, it’s slowly falling apart and the people who live here have to rebuild it.”

Themselves, paying out of their own pocket? Aside from being in desperate need of a make-over, Radka’s flat has some other, more fundamental shortcomings.

“There’s another thing, it’s quite warm in here, because there are these heating pipes over there. They’re not warm right now, but in winter it’s always very hot. So we have to open our windows in winter, because it’s very hot in here. And it’s not very spacious, so those are the major disadvantages.”

Could we take a look around to see how spacious it is?

“Yes, of course. So this is the living room. My husband’s father did this for us, because we wanted to make it as spacious as possible, so we had to raise the bed so that my daughter can play under it.

“Across this corridor, there’s a little room, this used to be a bedroom, but we made a study from it. So I work here, and I study here, but it’s quite small, it was difficult to fit all the books in here and the computer, and I think it’s really just fit for a study, it’s quite small.”

But while modern needs have outgrown what a panelák flat can offer, at one point, these apartments where considered state-of-the-art living. Martin Lux is a sociologist whose research focuses on housing.

“They started to be built in the 1960s, and they were not built as social housing, and this is a very important contextual difference. They were built for all strata of society, including university professors as well as people who worked in factories.

“They were built as public rental housing original, but not social housing, and so they were designed for everyone in the society. And what is also, I think, important, in that time: It was in some way technological advance building, because of the very bad maintenance of pre-war housing during Communism. 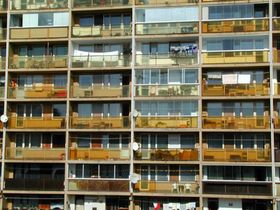 “So moving to prefab housing was in some way perceived as advantageous at the time, because it offered the inhabitants central heating, it offered them lifts, relatively bright rooms, balconies, so something that was not in pre-war buildings at that time, that’s why it was attractive.”

Jitka Hejtmannová, who now lives in the center of Prague in an apartment in a pre-war brick building, remembers moving into a new panelák flat with her parents when she was a child, in Louny, a small city about an hour away from Prague.

“The experience moving to the completely new built panelák, was excellent, we were happy at the time. My parents, when they were offered the newly built block of flats, they were just happy, because the panelák meant at the moment something like luxury. Everybody simply loved it.

“Many people wanted to live in a panelák, because there was central heating, warm water, elevators, and other features people simply loved.

“And the flat was really large, it was 80 square meters, and we were just three people, so it was just excellent.”

Břetislav Svoboda, a Prague resident who also grew up in a pre-fab apartment block, says he too was happy to move in as a child.

“It was fun at first, because our panelák, people were moving in within one month, because it was brand new, and within a month, it was full. We moved into a panelák when I was eight years old, we were one of the first in that part of town, and then people just started moving in, a lot of families with young kids, so we instantly made friends. I’m from a big family, I have four brothers, so there were a lot of kids, because it was families moving to Prague from different regions in the Czech Republic seeking work, so they got flats in Prague, and it was in paneláks.” Radka says the biggest advantage to living in a panelák is that everything you need tends to be close by.

“What I like about living here is the place. Because the metro station is quite close, it’s a six-minute walk, there are many shops around here, and there are kindergartens and schools, and doctors, so I’m quite satisfied with this.”

Of course, not all of the many paneláks were exactly the same. A tenant’s experience may have been different depending on how many families lived in their building, or if it was one of a few tower block buildings or one of a massive cluster of paneláks, such as the huge gray estates on the outskirts of Prague.

Having grown up in different types of tower block buildings, Radka, Bedřich and Jitka nonetheless were all quick to mention one characteristic that they found particularly problematic.

“There are huge disadvantages living in these buildings. For example, the noise. You can hear almost everything your neighbors are doing. We have a neighbor who lives a floor below us, and she’s almost deaf.

“And it took us about half a year to persuade her to buy headphones, because we could hear everything she was listening to, the radio or the TV, we could even understand the program she was watching, so it’s a huge disadvantage of the buildings, that you can hear everything.”

“Everyday life in panelák? Well, it was all about noise. The weirdest things were sounds of people arguing. Someone would be sitting on the toilet, and because they were all the same within the whole building, you could hear someone on the 11th floor arguing with their wife or husband from the toilet, which is definitely a weird thing.” “Especially the bathroom and toilets, the walls were no walls, it was kind of papers, and so when our neighbor was flushing the toilet, we heard it, everything was clear to understand, even the discussions they had or arguments, I kind of understood the topics of the arguments [laughs].”

Nowadays, there has been a shift in the demographics of panelák’s tenants, says sociologist Martin Lux.

“But it was not so quick and not as rapid as it was expected when the revolution happened after 1989. The short term estimates at the time was that very soon, housing estates will become residualized type of housing for very low income households only.

“However, there were some shifts, and those shifts are mainly that there are not so many families with children now, who prefer more suburban family houses or detached housing, and they lose the young generation a bit. The young generation lives there, but only on a temporary basis, more so than before, using it as a rental, a first housing, after that they move to better housing, new housing constructions or they build their own family houses.”

Radka and her husband, too, are looking to move to a detached house in a village near Prague soon.

“Well, we actually already bought a house near Prague, so in autumn we aer moving out, I’m quite happy about living in a house, so I’m looking forward to it. But as I mentioned before, it has advantages to live here, because everything is quite close, and when you have children, it’s ideal.” Jitka, who has already moved on from her panelák life, says she has never looked back.

“I would never live in a panelák in Prague, that’s the option I never count on. I luckily live in a nice place in Praha, it’s an old building built in 1904, so the walls are thick, 60 centimeters thick, so I can’t hear anything. But really, I would never choose a panelák for me to live in.” “Paneláks” – home for many Czechs, but what does the future hold?

Every third Czech lives in a „panelák“. These blocks of flats made of prefabricated parts are a typical feature of all the former Soviet satellite… 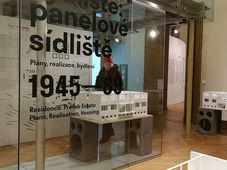 The exhibition Residence: Prefab Estate presents the history of selected residential complexes in the Czech Republic and the social,… An exhibition mapping the history of six panelak housing estates in Prague got underway on Thursday at the city’s Dejvice district.…