A group of young actors from Philadelphia in the US visited the Czech Republic last week to give a performance at the former Nazi concentration camp of Terezín. They staged I Never Saw Another Butterfly, a play based on poetry written by child inmates of the camp, at the Attic Theatre in Terezín, the very space where some of the play’s characters performed seven decades ago. 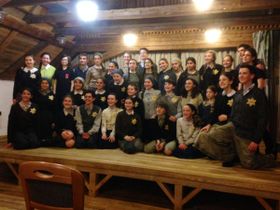 Photo: butterflyinprague.org The harrowing stories of child inmates of the Terezín concentration camp came alive again at the very place where they once transpired. A cast of around 30 mostly teenage actors from Philadelphia’s Wolf Performing Arts Centre last Friday brought the play I Never Saw Another Butterfly to Terezín’s Attic Theatre, a venue where Jewish children held in Terezín during the war themselves performed. One of the actors who came from the US is 13-year-old Zora Chilton.

“It felt really special. We came to where the story originated. This is where the children first performed the Brundibár opera. Actually being here in Terezín has made me think about how people were treated here, what the experiences was like for the Jewish people. It has really changed my perspective on what happened.”

I Never Saw Another Butterfly, by Celeste Raspanti, is based on poetry written by children interned in Terezín during WWII. In 1941, the Nazis turned the 18th century garrison town into a ghetto for Jews from occupied Czechoslovakia and other European countries. Around 150,000 people passed through its gates during the war; most of them were killed in Auschwitz and other extermination camps.

Some 15,000 children lived in the ghetto in separation from their parents. With no schools to attend, their educators organized art classes for them. The children drew and painted, wrote stories and poems. A verse from one of them, The Butterfly by young poet Pavel Friedman, gave its name to the play.

The Wolf PAC ensemble, with both Jewish and non-Jewish members of the cast, first staged the play two and a half years ago. They have since performed it at community centres, synagogues, churches and other venues in the US. But in November 2012, they thought of bringing the story back to where its came from. Bobbi Wolf is Wolf PAC’s founder and director.

“We performed at the Kimmel Center, a very large performing arts center in Philadelphia, and we had an incredible response, and the dream began. We heard about the Prague Youth Theatre; the play’s director, Tim Popp, got in touch with the PYT’s director Adam Stewart, and we thought, ‘Gee, maybe we can get to Prague’. We looked at each other and said, ‘Yes, we need to plan this.”

One of the highlights of the group’s Czech visit was meeting 85-year-old Holocaust survivor Raja Engländerová who inspired the play’s main character. Raja was transported to Terezín as a girl in early 1942 and survived three and a half years in the camp.

The actors and staff had been in touch with Raja even before they arrived in Prague. But they only met her face to face at a Seder dinner at the Lobkowicz Palace at Prague Castle. 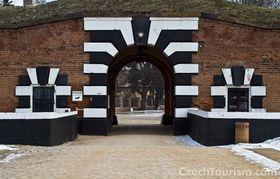 Terezín, photo: CzechTourism During an hour-long discussion, the children asked Raja all kinds of questions ranging from her life in Terezín to the state of Holocaust education in the Czech Republic. 19-year-old Ema Franzel is one of the actors portraying Raja in the play.

“She is incredible; she is so sassy. She told us a lot of stuff that we already knew like the details about being in Terezín. But seeing her in person, I think she added some things we did not know before, little tidbids about her life.

Did she surprise you in any way? Did she say anything that struck you as something unexpected?

“Yes. I didn’t think she had been back to Terezín at all. So it was interesting to hear she had the courage to come back. That was amazing I think.”

Raja Engläderová had seen the play several times in the past; she was even able to attend its premiere in the US in 1967. She did not travel to Terezín with the group for health reasons but saw the group perform I Never Saw Another Butterfly at the campus of the International School of Prague on the outskirts of the city on Thursday.

“It was a great performance by those children. They never experienced the war or anything like this and it must have been difficult for them to understand what it was like. But they managed that very well.”

The performance also left a deep impression on Raja’s Englädnerová’s granddaughter, Magdalena Kudláčková, who had not seen it before.

“In our family, the story was just a kind of an abstract fairy-tale with a happy ending. But now I suddenly saw my grandmother right there, all those years ago. It was very strong and it made me cry.”

The group raised about 50,000 dollars to be able to afford the trip, says Wolf PAC director Bobbi Wolf. She also explains that the children carefully prepared for the emotional performance in Terezín.

“We’ve shared videos, lectures and readings; we sat and did all kinds of wonderful exercises to get the children share their feelings and emotions. Just as we arrived here, there was lots of anticipation and emotion, and I could see it more and more in the children over the last 24 hours. Some children were having a hard time sleeping. So this morning, we as a group sat down on stage and did some exercises again.”

In Terezín, about 30 people watched the performance mostly parents and friends of the group. Bobbi Wolf said they had approached local media and institutions but none have expressed interest to attend. But that in fact helped the young cast to cope with their emotions while on stage, said the play’s director, Tim Popp. He also believes the experience will make the children better actors.

But more importantly, learning about the Holocaust in this way could make the young actors stronger people. Mariana Chilton, 46, is the mother of 13-year-old actress Zora.

“I think it will help her and the other children as they grow up and deal with the terrible abuses that happening all around them.”

More information about the Wolf PAC visit to the Czech Republic can be found at butterflyinprague.org