The US failed to counter communist threat in post-war Prague, says historian Igor Lukeš in his new book

Immediately after the end of the Second World War, Czechoslovakia became a testing ground in the contest between democracy and communist one-party rule. In Prague, the United States was hoping to challenge Stalin’s aim of including the country within the Soviet empire by supporting Czech and Slovak democrats in their uneven struggle against the communists. In his new book entitled On the Edge of Cold War – American Diplomats and Spies in Post-war Prague, Boston University professor of history Igor Lukeš explores the US efforts to counter the communist offensive in Czechoslovakia, and arrives at the conclusion that the half-hearted and even amateurish attempts by US diplomats in Prague were doomed to fail. 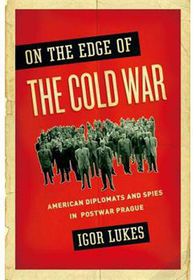 In his book, Igor Lukeš argues against the belief popular among some Czechs that the Western Allies left Czechoslovakia to Stalin without putting up a fight. In fact, says professor Lukeš, the Americans thought that preventing the country from becoming a Soviet satellite could put a stopper to Stalin’s ambitions.

“They certainly thought that Czechoslovakia was the one part of Central Europe where Stalin could be challenged. They had no illusions that one could challenge Stalin in Poland for instance. Nobody could stand up to Stalin in the Balkans – it was too far – or in Hungary; after all, Hungary was on the wrong side of the war.

“But Czechoslovakia had an excellent reputation; it was perceived as a country for the founding of which the Americans were somehow indirectly responsible as it was believed that President Wilson contributed to it. Whether that was true or not is a different matter but they were certainly determined not be passive in post-war Prague.”

To challenge the communist menace looming over Czechoslovakia, the US State Department sent an experienced man to head the American embassy in Prague. Laurence Steinhard had first-hand experience with the Soviet regime as he served as the US ambassador to Moscow between 1939 and 1942.

“When he launched his diplomatic career as the youngest American minister then in Stockholm in 1933, he was an up-and-coming rising star of the diplomatic service. When he then moved to Peru, it wasn’t that famous as Peru is not the centre of the universe but on the other hand, he was no longer a minister; he became an ambassador. From Peru, he was sent to Moscow. 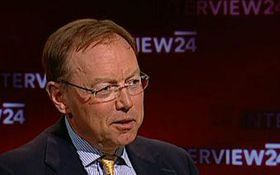 Igor Lukeš, photo: Czech Television “Then, in 1939, it seemed that he really had [his] career under control was destined to rise higher and higher. In Moscow, he predicted the signing of the Stalin-Hitler pact which was a great success. Unlike many others, who maintained illusions about the nature of Stalinism, he quickly saw through the façade and said it was the worst regime ever created by man, and a hoax.”

But Laurence Steinhardt’s career in diplomacy suffered a major setback when Nazi Germany attacked the Soviet Union, and turned Stalin into America’s ally rather than foe.

“President Roosevelt started bypassing him, he started communicating with Stalin not via the embassy but through direct emissaries such as Harry Hopkins, and Steinhardt felt he had been marginalized. That’s the time I think when he started thinking that he would have to refocus on his own life and his own finances. So he started to make money again, had mistresses, and so on.”

Ambassador Steinhardt’s late arrival in Prague – it took him an incredible 200 days to assume his post in Prague after his appointment, according to Mr Lukeš – illustrated the US envoy’s disenchantment with his job, to the detriment of US interests in the country, and to the future of Czechoslovakia.

“I think it’s a sign of lack of professionalism on the part of the State Department that it tolerated this outrageous behaviour of the US ambassador who at this very exposed post was very often simply missing in action. He simply wasn’t there. And when he was, he merely pursued the interests of individuals who happened to be clients of his law firm in New York. So rather than advancing the policy as determined by the President of the United States, he very often advanced his personal agenda or he wasn’t in Prague.” Laurence Steinhardt As Igor Lukeš chronicles in his book, the US embassy in Prague more often than not misread and misinterpreted some of the crucial events taking place after the war. Ambassador Steinhardt’s dispatches were overoptimistic and grossly underestimated the communist determination to seize the country. The US mission had intelligence agents operating in Czechoslovakia but they failed spectacularly face to face with Soviet and Soviet-trained intelligence officers.

“The Americans were completely naïve and their people mistook gathering information during dinner parties for espionage. For instance, they had no clandestine services here. Their spies were people who went to dinner parties, would come up to people and ask, ‘how is it going? What can you tell me?’ Well, they told them. [Deputy prime minister] Petr Zenkl said this and [deputy prime minister] Mons. Jan Šrámek said that, and so things seemed to be going well because Mons. Šrámek said so.

“But of course then it turned out that Mons. Šrámek did not know all that much. People like Rudolf Slánský and Karel Šváb, who actually ran the opponents’ intelligence services, used different methods and were much more ruthless and sophisticated. So the Americans suffered a strategic defeat when it came to intelligence.”

As the communists were gaining more power, Czechoslovakia was sinking deeper and deeper into the Soviet sphere of influence. In the summer of 1947, the country passed what professor Lukeš called the point of no return. Under extreme Soviet pressure, the government backtracked on its previous decision and pulled out of the Marshall Plan, a US programme designed to help rebuild European countries destroyed by the war. Taking part would establish strong ties with Washington which was something Moscow did not want to happen. When the Czechs buckled under pressure from Stalin, the US did not help. Laurence Steinhardt in his Moscow office after it was struck by a bomb in 1942 “They did very little, and yet again, Steinhardt wasn’t at the embassy when this happened. Later on, he actually referred to the reversal of the Czech decision regarding the Marshall Plan as the one episode where he had clear evidence that the Czechs were forced to reverse their original decision but he had made no attempt to help the Czechs to resist the pressure. He also very quickly put the situation into a new, weirdly optimistic context and claimed this was a tactical mistake for Stalin and the communists and that the democrats would quickly use this to beat them.”

The question whether the communist coup of February 1948 could be prevented continues to haunt Czech society to this day. The communists won the semi-free elections two years prior, but were gradually losing public support. Pro-democratic forces hoped that after the subsequent elections, scheduled for May 1948, the Communist Party of Czechoslovakia would have to adopt more moderate policies. But most people, including those working at the US mission in Prague, failed to realize that Stalin would not give up.

Just two months after the putsch that sealed Czechoslovakia on the wrong side of the Iron Curtain, Ambassador Steinhardt sent a cable to the State Department, offering his view of the development. He wrote that the Czechs did nothing to prevent the communists from taking over and instead unrealistically relied on help from the US to do the work for them. Professor Lukeš agrees that the responsibility ultimately falls on the Czech democratic elite who misunderstood the gravity of the situation.

“The Czech public too is responsible because they were so frightened of Germany. In my opinion, it was irrational fear because in 1945-1948, Germany was a crushed country under foreign occupation which was not in a position to rise and march its troops again on Wenceslas Square. But it’s also true that the West contributed to the communist triumph in Prague. I’m often reminded of a quotation from a book of fiction describing 1948. Somebody said that the democrats had lost because they could hate their totalitarian enemy but they had no one to love.”

Laurence Steinhardt left Czechoslovakia in the autumn of 1948 to become the US ambassador to Canada where he died in a plane crash two years later. In Prague however, he left a mark that has survived until the present day. When he arrived in 1945, he was dissatisfied with the run-down Schönborn Palace, the seat of the US embassy in Prague. He therefore asked the Czechoslovak government to let him use a magnificent residence that before the war belonged to one of Prague’s wealthiest families, the Petscheks. In the end, the US government bought the building for “wooden money” – in exchange for surplus war material left in the country by US military. The building still serves today as the residence of the US ambassador to Prague.

“The building really was an expression of Ambassador Steinhardt’s insecurity. He was a wealthy and powerful man but his ego was somehow always vulnerable. He always needed more power, more money. He needed more evidence that he succeeded and that he was accepted in society. So in my opinion, the size of the Petschek residence – which I’m told is the largest building anywhere in the world serving as a US ambassador’s residence – was an expression of Steinhardt’s insecurity rather than his business acumen.” 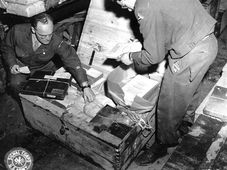 In 1946 a secret American operation in Czechoslovakia led to major diplomatic protests. The US authorities had organized a mission…