Prisoners’ letters: a fragile lifeline for dissidents under Normalisation

Prisons and prisoners’ letters under the Communist era ‘Normalisation’ of the 1970s and 1980s is the subject of this edition of Czech History. For the political prisoners that resulted from the Communist crackdown following the 1968 Soviet-led invasion, those letters were a vital link with the outside world, not just to family and friends but also their supporters worldwide.

Many of the prisoners letters, most famously Václav Havel’s ‘Letters to Olga’ were published, some saw the light of day almost instantaneously in the covert, undercover, Samizdat publications that circulated in the underground opposition to Communism and some were published abroad. Many though were solely between the sender and close family, with the ever present censor watching over the private process.

Those prisoners’ letters, for which no overall collection sadly exists in the Czech Republic, was recently the subject of an interdisciplinary colloquium organized by the Institute for the Study of Totalitarian Regimes in Prague. To understand the letters though, you have to understand the Czechoslovak context in the 20 years before the collapse of Communism. For that I spoke to one of the participants in the colloquium, historian Prokop Tomek who explained how conditions in the prison system were relaxed and improved during the 1960s.

“During the 40 years of the Communist regime the rules were changed a lot. At the beginning and during the 1950s the prison system was under the Ministry of Interior. But in 1968 during the reforms of the Prague Spring, the prison system was subordinated to the Ministry of Justice. That was better for the life of political prisoners. But, of course, for the whole time it was part of the totalitarian regime and it was for the whole time under the observation of the state security service and other services of the Communist regime.“

The prisoners themselves changed a lot over time. By the 1970s, political prisoners as they could be called, although the term was never recognized by the regime, were a fairly small proportion of the incarcerated total. Prokop Tomek again:

'Most of the people sentenced for political reasons were in the first category of jails.'

By the normalization era, prisons were divided into categories according to the seriousness of the crime and whether you were a repeat offender. Prokop Tomek:

“There were three levels: the first level was for slight [minor] offences. It was people who had not offended. The second was for repeat offenders and the third was for the most serious crimes. But, for example, the well known [dissident] Ivan Martin Jirous, he was not a criminal of course but opposed the regime and was jailed for political reasons, he was sentenced to service his term in jail in the third, hardest, level with people who had committed killings for example. It was in Valdice, one of the hardest and worst jails in Czechoslovakia.”

Ivan Martin Jirous was a famous underground poet who joined the ranks of the so-called dissidents. Although, conditions had improved since the 1950s, when food was only given out to those in labour camps who fulfilled their work quotas, prison labour was still used as a form of punishment. 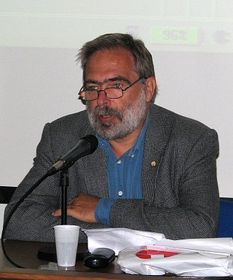 Jiří Gruntorád, photo: archive of Radio Prague “Most of the people sentenced for political reasons were in the first category of jails. Bit of course, some of them, such as Jiří Gruntorád, the founder of libri prohibiti library, was forced to be in the second level [prisons. And the conditions were very poor because difficult work was given to people in jail and they were forced to work very hard. And their work in jail influenced the amount of food which they got in prison. There was not a lot of torture in the jails in the 1970s and 1980s in Czechoslovakia. But there were tools which were not violent but they strongly influenced the lives and conditions of those who were in prison.”

Jiří Gruntorád was the founder of an underground publishing house who after the fall of Communism created a collection of those publications in a library in Prague. Conditions though between prisons varied a lot with the overall regulations pretty vague.

Prison letters were one of the few forms of communication with the outside world. But it was a tenuous link and one governed by a lot of very uncertain restrictions which every new prisoner would struggle to understand and exploit. Petra Čáslavová is a professor at the Institute of Czech Literature who has specialized in the study of prisoners letters. She outlined some of the constraints.

'One way to get round censorship used by some political prisoners was to use a form of sophisticated, intellectual, writing.'

“From a formal point of view there were a whole series of limitations. For example, it was laid down how many letters those serving a sentence could send, to whom the letters could be addressed, and it was also stated what size the letters could be. That was just the formal aspect. As regards the content, there were a whole range of other conditions. Basically, it was only possible for the prisoner to write about family matters. In no circumstance was it possible to write about the conditions within the prison or about the state of other prisoners. It was forbidden to use foreign phrases or series of numbers and such like. Of course, some of the censure was stricter and all use of humour was punished. Ivan Martin Jirous characterized the writing of prison letters as a literary task when you had to write something but were not able to.”

Censorship was a certainty with the secret police, the StB, taking a particular interest in the communications of political prisoners. But the censorship was haphazard and prisoners sought ways to get round the limits and get as much into their letters as possible. After all, they were often kept separate from other political prisoners and did not have that much in common with the ordinary criminals. Dissident Petruška Šustrová recalled that most of her fellow prisoners were prostitutes and their shared life experiences did not mean that they had that much in common to talk about apart. Letters though were a fragile link with the outside. Petra Čáslavová :

“All the letters, both those being sent from the prison and those arriving underwent some form of censorship by the authorities. If the censor decided there was a problem with the letter and it was only a small portion of the letter, then it could be blacked out and the letter could be sent on. If it was a large chunk of the letter then it might not be handed over at all or only the part that was not regarded as problematic would be read out to the prisoner. The situation was also very demanding for prisoners in the sense that censorship could sometimes last a very long time even though that broke the prison rules which stipulated that it should be carried out within five days. That rule was often broken and the letter could take a very long time to get through and it could take up to a month. That meant that prisoners simply sometimes did not know if a letter had gone astray or had just been placed in their personal prison file and they knew nothing about it, which was itself against the prison rules.” 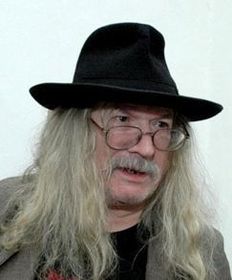 Ivan Martin Jirous, photo: Tomáš Vodňanský Former dissident and later minister of the interior following the fall of Communism, Jan Ruml, recounted how messages from his family were smuggled in on the cardboard of bars of chocolate that were allowed to be sent into him. Others circumvented censorship through the letters themselves though this could be a hazardous venture.

“Some prisoners were able to include in their letters some types of ciphers, codes, or signals which could usually be understood by those closest to them, their family. So the cipher could be for example some reference to a past event in the family life. But, of course, it was not certain that the family member would understand what the reference was about. There is, for example, the case of when Ivan Martin Jirous wrote to his wife, Juliana, from prison telling her to get the typewriter repaired. He meant her to understand that she should get rid of it so that it could not be used to incriminate him for spreading samizdat publications. But she took him literally and she got the typewriter repaired.

“Also, one way to get round censorship used by some political prisoners was to use a form of sophisticated, intellectual, writing. The censors were used to dealing with the letters of ordinary criminal prisoners and all of a sudden they got these letters from intellectuals and highly educated people. This was the case, for example, of the letters of Václav Havel. They soon twigged that when they used this type of intellectual writing that the censor could not cope and could not read and censor the letters and often let them through.

“Havel later admitted that he used this type of [Martin] Heidegger writing deliberately. But there was another side to the coin. That was when the censor believed that some code or signals were being used in a letter when they were not at all. One prisoner, for example, said he had the flu and this was interpreted as a signal to the outside world when it was just a bare statement of fact. For this reason some prisoners had their letters confiscated and were victimized without a real reason.”

Some prisoners, such as Havel, were aware that their letters were not just for close friends and family but would reach a much wider Czechoslovak and international audience and that probably had a role in shaping their style and format as well. Petra Čáslavová:

'One prisoner, for example, said he had the flu and this was interpreted as a signal to the outside world.'

“Some of the prisoners when they were writing their letters knew that they would be read by other friends and by the wider community and perhaps get into foreign hands. In this case they were to a certain extent stylized and demonstrated certain literary ambitions. Prison letters during that time became established as a certain genre of the flourishing samizdat literature. They came in collections of prison letters or as individual letters, in samizdat magazines, or in publications by Charter 77. The correspondence was important then for two reasons: the first was for their informative nature in that they described to a circle of friends how that prisoner was getting on and his or her condition. The second important facet and reason why they were made public and circulated was that they were a key for the organization of national and international solidarity.”

The city of Prague on Thursday bowed to the courage of Russian pro-democracy activists who laid down their lives in the quest for human rights.…