Michal Pullmann on Perestroika, Violence, and Remembering the Communist Past

Michal Pullmann is head of the Institute of Economic and Social History at Charles University in Prague. In this first of a two-part edition of Czech History, he discusses his research, which has focused most recently on the last years of communism in Czechoslovakia. When I met Pullmann in his office recently, I started by asking him about his book Konec Experimentu (The End of The Experiment), which examines the influence of Soviet Perestroika on different groups in Czechoslovak society in the late 1980s. My first question was how Perestroika was formulated and whether this drive for reform resulted in a new political language:

Michal Pullmann, photo: archive of Charles University “This was a very important part of my argument. Late socialist language is very special and it is very difficult at first glance, let’s say, to understand it. The first attempt to reform the economy in the 1980s, in the beginning of the 1980s - the official title was ‘soubor opatření ke zdokonalení soustavy plánovitého řízení národního hospodářství’ [a group of measures to improve the framework of the planned administration of the national economy]. I don’t know if we can translate it somehow.”

I don’t think we can!

“This is really special language that omits always… tries to deny, even, the very idea that it is a reform. The word ‘reform’ was banned, because it would remind people of 1968, of course.

“It was always necessary in pre-Perestroika language to show, to expose, that the system somehow works, but needs to be only improved, accelerated. And, I mean, the conception of acceleration, improvement, intensification – this is not only expert language, but also a very important part of the ideological language of that time. At the time of Perestroika, it was suddenly visible that it does not work with these terms and it is necessary to develop a new language. And in this aspect, the ideologists of Perestroika failed to bring a new vocabulary that would be first coherent, and second accepted by society as a kind of unifying language. This failed, and this was precisely the precondition also of the demise of the system.”

So there you were referring to the idea of thinking about rule, administration, life in general in Czechoslovakia in the 1980s as a system, but yet you called your book Konec Experimentu rather than Konec Systému. What are the stakes of understanding the 1980s as the end of an experiment, rather than the end of a system?

I wondered whether your own research had led you to have a stronger position on quite a popular narrative here, that communism was something essentially Soviet or Russian and a foreign import? With your own research, looking at archives both in Moscow and here, how would you position yourself in regards to this?

“I am not blaming anybody, I am not even blaming the communist leadership.”

“This is a very difficult question, because I never challenged the very idea that Czechoslovakia was, and Czechoslovak development was, let’s say, dependent on impulses from the Soviet Union. At the same time, the adoption of anything is always very creative, and this regards not only the 1950s, and I mean the adoption of the Stalinist system at the beginning, but this regards also the end. There is never the possibility that we take some original and move it into another space without any internal change.

“I am trying to use precisely this idea of transnational transfer which is never even: if you transfer goods or ideas or identities or whatever, it is always being internally transformed. And that was my idea to show the transfer of Perestroika between the Soviet Union and Czechoslovakia.”

One of the ways that your book was quite controversial was that it suggested it was not just members of a Politburo who were agents of implementing Perestroika. I wanted to ask you why you think this might be a controversial move to make, to suggest that non-politicians also had a stake in the way this country was run in the 1980s? And why do you think it is important to suggest that non-politicians did have a stake in that?

“Perhaps I indirectly blamed society for being somehow co-responsible for communism. Not only the elites, not only the soldiers and the army, but also society somehow adopting something, even though they were not free, they were not happy with that. Somehow I was implicitly blaming - even though it was not my intention, because I am a historian, I am not blaming anybody, I am not even blaming the communist leadership, because I am a historian trying to explain how they were reacting to some challenges! But implicitly, for a reader, it could have been deciphered as blaming society for being co-responsible for communism. This is not very new, because already Václav Havel said in 1990 that communism was our history and we have to deal with it, we have to cope with this history as our own history because we were doing it and we were living it, etc. So this idea is not new.

“The second point which was perhaps the most provocative for many, not historians but rather journalists or for some part of the public, was the idea that there was something like social consensus in communism. Because the typical explanation, especially if we implement the totalitarian paradigm, is that the communist system is something that is posed over the will of the people, and over the people, who just suffer.”

While we might not believe in a totalitarian model positing machine guns everywhere, all the time, otherwise no one would have done anything, presumably violence did play a role in this society, as it did in other societies around the world in the 1970s and 1980s? Can I ask you what you have been finding in your more recent research was the role played by violence in maintaining social order?

“The Stalinists… were usually proud of exposing their violent procedures, be it through collectivization or other examples.”

“I think it was one of the smartest things that the communist leadership invented in the Soviet Union at the end of the 1960s and in Czechoslovakia at the beginning of the 1970s. They insisted on removing violence from everyday life and visibility, from the everyday life of the so-called ordinary citizens. I try to employ also this ‘expertization’ of violence and its enclosure into specific fields such as prisons, such as psychiatric hospitals, specific schools, etc. This kind of enclosure of violence in specific fields, and in expertized fields, in the 1970s had extreme importance, and had very stabilizing impacts on society.”

That leads to a very interesting question about the changing form of violence. You suggested that it was maybe taken over by experts and particular institutions. Can you read back from that anything about the years traditionally thought of as years of terror, the 1950s?

“There is a clear difference to the economy of violence, let’s say, between the 1950s and the 1970s. The Stalinists - they were usually proud of exposing their violent procedures, be it through collectivization or other examples. Violence for them was some kind of proof that society is going in the right direction. And this kind of exposing violence was extremely important for them. For the Normalizers, they not only felt embarrassed, but they tried to hide violence. It was completely different.

“I mean, not only in ideology, but also in practice, there is this turn towards hiding violence, expertizing violence, and this was, I would argue, one of the major roots of stability of the system in the 1970s and in the first half of the 1980s, until the time of Perestroika. And this threat of violence was actually, at the end of the 1980s, one of the most important topics - I also brought that up in my book. This kind of fear of anarchy and of the very fact that the state wouldn’t be able to protect its citizens against the internal violence of hooligans, let’s say, of drug addicts, of the foreign enemy, even though it was very unclear who was a foreign enemy. But that the state wouldn’t be able to guarantee what the state should guarantee was one of the very important topics, let’s say, that precisely this weakness of ideology was visible in.” 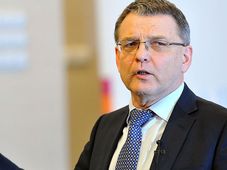 Changes in teaching and writing history in the past two decades

Last time in Czech History, Michal Pullmann discussed his research into Czechoslovak society in the 1980s. In this second in a two-part…