In this edition of Czech History, we look at the life and times of the electrical engineer František Křižík, whose Plzeň lamp took the gold medal at the World Fair in Paris in 1881. Today, he is considered one of the best-known Czech inventors. František Křižík František Křižík was an important Czech inventor, entrepreneur and engineer. Today, many streets across the country are named after him – like Křižíkova Street in Prague’s Karlín neighborhood. The inventor came from a relatively poor family, and was born in Plánice, near Plzeň. Jaromír Bílek, the head of the National Technical Museum’s electrical engineering department, talks about Mr. Křižík’s childhood.

“Even though his family was relatively poor, I think that he had a very happy childhood, as he also writes in his memoirs. It was more or less the life of a village boy, who played pranks and got in trouble just like all his friends, went to school, of course, climbed trees, went fishing for crayfish in the river, all that. I think that a lot of children today maybe don’t have a childhood as happy as his.”

After finishing elementary school, Mr. Křižík moved to Prague, where he went to secondary school. But due to his poor upbringing, getting into university was not easy.

“Unfortunately, since he came from a poor background, his parents did not have the money to pay for him to take the leaving exams, the maturita, at the end of his secondary school education, and so he could not become a regular student at a university. So Prof. Zenger accepted him, as an exception, as a guest student, and he was able to attend university in this way, which in a certain way is the reason for his achievements.” 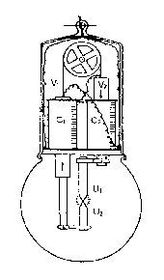 Arc lamp While at school, Mr. Křižík worked in a factory to earn extra money. There, he first came into touch with telegraphic signaling, and in 1878 invented a device that would prevent the collision of trains – his first official invention, for which he received 1,000 guilders, the currency at the time. The invention he is probably best known for, though, is a lamp known as the Plzeň lamp, or Křižíkova lampa in Czech. It is a perfected version of the electric arc lamps that already existed at the time, as Mr. Bílek explains.

“But when they wanted to expand the lighting in the factory, they found out that if they connected two such lamps to one dynamo, it did not work. The lighting broke down, lamps went off. So Mr. Křižík started looking into why that was. And he invented the differential regulator, and perfected the core parts that were put inside the regulator to the extent that it was possible to connect an unlimited number of lamps to one dynamo, and that was his big achievement.”

Mr. Křižík’s invention opened many doors for him, especially after it received a prestigious award at the World Fair in Paris in 1881. His lamp even outdid Thomas Alva Edison’s light bulbs, shining brighter then them.

“Because he perfected this lamp, it received an award at the World Fair in 1881, even though there was a number of other electric arc systems, this one was the one that was considered the best by the commission. And people were really impressed by it, because it worked very nicely, and he was given the gold medal.”

After the world fair, Mr. Křižík sold his lamps in England, France and Germany, up to 5,000 a year. He was able to open a factory in Prague, and in 1883 provided lighting for a technical fair in Vienna, where he again was awarded a medal.

In 1887, he was given a tender for street lighting in the city of Jindřichův Hradec, and later Písek. And in 1888, he built the first municipal electricity plant in Prague’s Žižkov district. He also built the city’s first tram route, at Letná, which was only 800m long but quickly became a sensation. Later, he also constructed another tram route that connected Florenc to Vysočany and was 8 km long. Some two million passengers would ride on it every year.

Despite all his achievements, Mr. Křižík was not just after profits and fame, which would lead to many disappointments and financial problems in his life, says Mr. Bílek.

“For example, when his factory in Karlín burned down, he did not let go a single worker. He financed it from his own money and had to take a loan. Later, he was forced to go public with his company, which he really did not like. And later it turned out that the banks did not deal with him fairly.”

As alternating current electricity became more widely used, and his competitor Emil Kolben was given many tenders that Mr. Křižík applied for, he slid deeper into financial trouble. When he died in 1941 in Stádlice near Tábor, his body was brought to Prague for a funeral ceremony in the capital’s Vyšehrad cemetery – an act that, during the occupation of Prague by German forces, was seen as a silent manifestation of resistance. 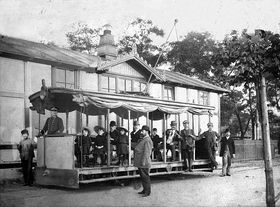 “He contributed to the development of electrical engineering in the Czech Republic, and what is not powered by electricity these days? We cannot live without it. And because he was not just after profits, but because for him, it was also important to develop electrical technology further, I think he deserves thanks.” In this edition of Czech History, we look at the life and times of the electrical engineer František Křižík, whose Plzeň lamp took… 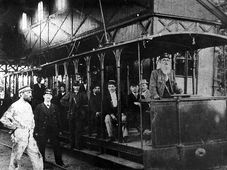 It was exactly 120 years ago this week that Praguers got their first ride in an electric tram. Today they are a staple of the city’s…