Albert Einstein’s tenure as a professor of theoretical physics in Prague is often noted in passing – as an “interlude” or a “sojourn” of no great significance, even though it was in the Czech capital where his most extraordinary work, the theory of general relativity, truly began to emerge. With his new book Einstein in Bohemia, Princeton University history professor Michael D Gordin makes a compelling case that not only did Einstein’s time in Prague shape the science, literature, and even politics of the city for decades to come, the same is true in reverse: the acquaintances Einstein made in Bohemia and ideas he was first exposed to there continued to occupy him. 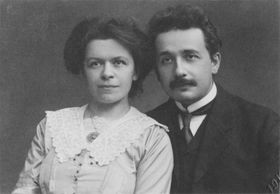 Albert and Mileva Einstein (1912), photo: Public Domain Einstein arrived in Prague to take up a post at the German University in April 1911 with his first wife Mileva Marić, herself a physicist, and two sons. He only taught there for three full semesters – and at first didn’t warm to the city. But apart from first fully devoting his time to positing what would be his greatest discovery, while in Prague Einstein was compelled to think differently about his own identity – as an atheistic German-born Jew with Swiss citizenship, wary of nationalism, the Zionist movement included.

Before receiving a review copy of his book, I had heard a lecture by Prof. Gordin on Einstein in which he said he started looking into his time in Prague at first thinking he would write a “micro-history” about that year and a half, and then “an intellectual urban history” of the Bohemian capital, before gravitating towards a hybrid of the two. I began by asking Prof. Gordin what drew him to the subject and how and why his concept for his book Einstein in Bohemia evolved.

“While reading several biographies of him, I noticed only very brief mentions of his time in Prague; that he had received a position in Prague, arrived in 1911 and left in 1912.

“And I thought wouldn’t it be interesting to focus just on that year and a half and see what one could find. I started studying Czech for a number of reasons and thought that would help with the project, which it did.”

“Einstein is a special case not in the history of science but in much of 20th century history, in that he is incredibly well documented. We have a very large number of his letters, his notebooks, reminiscences about him, government documents, etc. So, I thought I would investigate in very close detail what he did almost week by week, from when he arrived in early April 1911 to when he left in August of 1912. What he taught, who he met, etc. 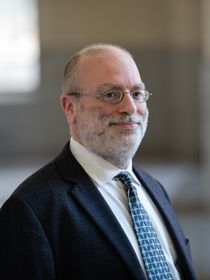 Michael D. Gordin, photo: archive of Wilson Center “It turns out that there were two things wrong with that plan. The first is that no matter how well documented Einstein is by the standards of our present-day understanding, there are months when we don’t know much about him. And he wrote about what he chose to write about, and administrative documents cover certain parts of his time there and not others. So, it wasn’t possible to do it as a historian would like to.

“The second problem is that it wasn’t terribly interesting. Most of what he did was go to work, think about physics and go home. He had very limited engagements with the culture of the city – but I became interested in those engagements and the culture of the city. The more I dug into those, the richer it seemed to be to talk not just about Einstein but to talk about the world he had been in, and follow also the lives of his major interlocutors where he was.

“So, I tracked them through this period – and this is where it being Prague is especially helpful in that the city in the pre-World War I period, from say 1900 to 1914 is also extremely well documented because of lot of interest especially in the life of Franz Kafka, who had many similar connections to Einstein.

“I was able to trace a lot of that environment, and that’s where the book came from – trying to look in-depth at a particular person in a particular place, and then following the strands of his influence and the influences upon him over time.” 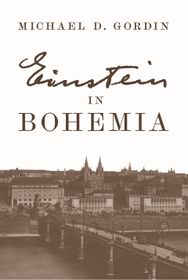 Photo: Princeton University Press Prof. Gordin writes that if we think about where Einstein was over his life, a few places stand out: the patent office in the Swiss capital of Bern during 1905, his “miracle year” of extraordinary discoveries; in interwar Berlin before the rise of Nazism; or in the quiet hamlet of Princeton, New Jersey, where he lived out his final two decades. If you picture Einstein in each place, he writes, you get a different story.

“The Swiss Einstein was the precocious genius, who overturned classical physics with special relativity and quantum theory. The Berlin Einstein was an international celebrity, adored by millions as the Newton of the modern age while garnering enemies because of his deeply felt views about pacifism, nationalism and Zionism. The Princeton Einstein was the sage of the 20th century, warning of the dangers of the future under the shadow of the atomic bomb. Tell me where your Einstein is, and I will tell you who he is.”

So, what kind of the Einstein do we see if we follow him around Prague, and then trace connections that began there and radiated throughout his life? The result, Prof. Gordin writes, is a new Einstein, “whose biography is inflected in different ways as we find him deeply enmeshed not just with scientists but with writers, philosophers, politicians, and—through the lodestar of Prague—a participant in some of the major dramas of the 20th century.”

An oath to an Emperor, and the question of identity 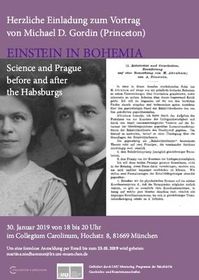 A flyer promoting Michael D. Gordin's lecture, ahead of his book's publication When Einstein taught at the German University in Prague, Prof. Gordin says, he was keenly aware of the rising polarisation among nationalist activists across the linguistic German-Czech divide. In Prague, he also found himself compelled to officially identify as a member of the Jewish faith, rather than an atheist, due to Einstein suddenly being a “civil servant” (as a university professor) in the Hapsburg Empire.

Einstein also found himself constrained to German-speaking intellectual circles. Some, such as the philosopher Hugo Bergmann, and Franz Kafka’s publisher Max Brod, who likely introduced the two great intellectuals, and certainly Einstein to Zionism – a movement the famously anti-nationalist pacifist first rejected but would return to engage with through his Prague acquaintances.

“When Einstein was in Zurich, which is where he lived before moving to Prague, he thought of himself as ‘without religion’ – konfessionslos – which you could absolutely register as, and it was important to register as a member of a faith or having no faith.

“But you couldn’t take an oath for the civil service of loyalty to the Emperor without stating an actual religion because the Emperor didn’t think you could swear an oath without that. So, a Prague bureaucrat did change it to mosaic, to Jewish. Einstein agreed to that. He thought it was a relatively silly requirement.

“Yet, when he had the choice – and when he moved to Berlin in 1914 and it was important again as an issue – he consistently tried to be ‘without religion’ as long as absolutely possible to do so. This resistance to categories imposed on him by states is a very prominent feature of Einstein’s life and attitude.

“However, culturally, he always identified to some degree as a member of the Jewish people – and that becomes much stronger from 1918 until his death, even though he doesn’t believe he has any association with the religion.

“And so for Einstein as a person, you can see the complexity of what it means to define yourself one way or another. With nationality, something similar happens, where he adopts or rejects citizenships more for convenience rather than out of patriotic loyalty, and this occasionally causes rather large problems in his life.”

Einstein and Prague: a double biography Albert Einstein (second from right) at the 1911 Solvay conference, photo: Benjamin Couprie, Public Domain Einstein in Bohemia is a biography of both Einstein and the city of Prague in the first half of the 20th Century, from its status as the third city of what was then the Austro-Hungarian Empire, to the capital of independent Czechoslovakia.

Professor Gordin depicts the intellectual, social, and political milieu of Prague before the World War I. He also demonstrates, through meticulous research, the long-term impact that Einstein’s short-term stay in Bohemia had on his scientific research, thoughts about nationalism, and his identity as a secular Jew, initially cool to the Zionist movement he was introduced to in Prague.

“Einstein was very often categorised as a ‘German’ and as a ‘Jew’, usually by different people, and those are both categories that he resisted throughout his life. He sometimes embraced them as an identification and sometimes rejected them. The place where that first came to a head for him – became a really problematic episode – was in Prague, where his Jewishness became important because the Hapsburg state thought it was important.

“And his German-ness became important because he was in a city that had about 7 percent German-identified citizens and 93 percent Czech-identified citizens, with Jews on both sides of that divide. And so, in Prague, the status of someone as a ‘German’ – whether a Prague German, a Viennese German, or a German from outside of the Hapsburg Empire – became a very prominent category.

“Einstein had never thought about himself in those ways before. So, by looking a Prague in the Hapsburg period, when it’s a particularly fraught question whether one is Jewish and German, Jewish and Czech, or some mixture of those, brought a lot of those issues to the surface.

“And so, the first three chapters of the book follow Einstein himself in the city, and the last four chapters follow it after he left the city, and we see those themes from the Prague period percolate throughout his life, in many directions.”

We pick up our discussion with Princeton University history professor Michael D Gordin on his new book, Einstein in Bohemia next week. In part two of this feature, we learn the exact nature of the work Einstein developed here, how he spent his leisure time in Prague, what he thought of the city – and of Czechs – and which intellectuals Einstein most influenced, was influenced by, and befriended. This is a golden age of geekdom, says The Physics of Superheroes author James Kakalios

With the right springs, would somebody really be able to leap over buildings like Czech WWII urban legend Pérák? Which superhero’s… 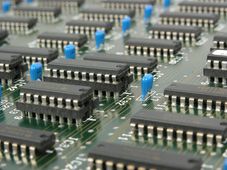