Zdeněk Nejedlý was an influential Czech musicologist and Communist politician. Most often remembered as a passionate admirer of the composer Bedřich Smetana, he was also instrumental in linking Communist ideology to Czech traditions. A new biography of Nejedlý by Jiří Křesťan offers a more complex view of the man whose life illustrates the perils Czech intellectuals faced in the 20th century. 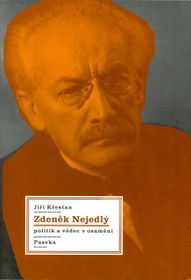 Photo: Paseka In the collective Czech memory, Zdeněk Nejedlý figures as an eccentric-looking professor and proponent of Bedřich Smetana’s music who turned into a senile Communist official. Nejedlý’s big ego earned him names such as the Red Old Geezer and the Last Hussite, and he was often ridiculed for an inability to complete his overambitious projects.

A recent biography entitled Zdeněk Nejedlý: Politician and Scholar in Solitude offers a closer look at the ambitious historian and musicologist, who, like many others at the time, came to believe in the Communist vision. The book won the prestigious Magnesia Litera award for best non-fiction work. Its author is Jiří Křesťan, a historian at the National Archive.

“He was an interesting person because he was in several ways typical of Czech intellectuals of the time. Zdeněk Nejedlý was one of the most talented Czech historians and musicologists. He had a very good education and achieved some exceptional results, for example in his highly acclaimed works on Richard Wagner and Gustav Mahler. At the same time, he’s also interesting because he found himself close to the Communist movement, and his transformation from a critical scholar to a disciplined party member is fascinating.”

Nejedlý shared his birthplace with the composer Bedřich Smetana, who became the object of his scholarly interest. He considered Smetana’s music to be more modern and progressive than that of other Czech composers, such as Antonín Dvořák and Leoš Janáček. Some believe his attitude to Janáček has had a lasting effect, in that many Czechs have never really appreciated his music. Jiří Křesťan believes that such a black-and-white approach was not uncommon in his era.

“He had a certain way of thinking and looking at the world which was not entirely uncommon for Czech intellectuals of the time: this kind of black-and-white view of the world, of emphasizing one phenomenon while shunning another. He was not able to understand different opinions. So this is when we can first detect his future political views.” 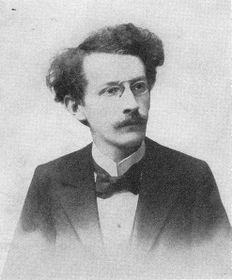 Zdeněk Nejedlý Another object of Nejedlý’s interest were the Hussites, a mediaeval anti-Catholic movement that shook the Bohemian kingdom to its foundations. One result of his interest in the Hussites was the publication of an acclaimed history of their chorals.

In 1917, during the First World War, he organized an exhibition on Bedřich Smetana which was a great success with the public, who were suffering the tribulations of the conflict. This led him to believe he could get involved in politics; he first joined the party of his erstwhile professor at Prague’s Charles University, Tomáš Masaryk, who by that stage had become president.

“In 1918, he joined Masaryk’s Realistic Party. In the 1920s, he worked with most left-wing parties but was relatively critical of the Communists and of some things that were happening in the Soviet Union: the trials, censorship, so on. He wanted to be a moderator between the left wing movements here. But with time, he placed his hopes in the Communist Party and the Soviet Union.”

In the interwar period, Nejedlý became a professor of musicology at Charles University, and undertook three major projects: monumental biographies of Bedřich Smetana, T. G. Masaryk, and Lenin. But his ambition was greater than his ability; attempting to cover these figures in as much detail as possible, Nejedlý never completed the task. For example, the seven volumes of Smetana’s biography that were eventually published only cover the composer’s youth.

Towards the end of the 1930s, with the looming threat of Nazi Germany, Nejedlý found himself closer and closer to the Communist Party. He spent the wartime years in Moscow exile but his biographer says that even first-hand experience with communism did not make him reconsider his allegiance to the Bolsheviks. 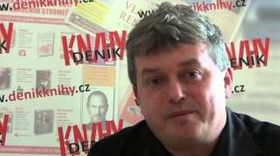 Jiří Křesťan, photo: YouTube “In the late 1930s, several political trials took place in the Soviet Union. However, Nejedlý, along with President Beneš and his people, remained silent because they did not want to lose such a powerful ally. But this was the time when his first doubts began to appear; these were later enhanced by his experiences during a wartime exile in the Soviet Union. He saw how brutal the regime could be and how little value human life had there. He himself was at risk over some of his texts about the underdevelopment of the country. These papers reached Stalin himself, and Nejedlý faced accusations of ‘bourgeois nationalism’”.

Interestingly, Nejedlý met both Adolf Hitler and Joseph Stalin. While his encounter with the Nazi dictator was only brief and formal, the meeting with the Red Tsar had a more profound effect.

“Before his personal encounter with Stalin, Nejedlý in fact met Adolf Hitler at the Wagner festival in 1933. He was introduced to Stalin 10 years later. At that time, Czechoslovak president Edvard Beneš was in Moscow to sign a treaty with the Soviet Union, and the Soviet dictator used Zdeněk Nejedlý in his little game. At a reception, Stalin surprised everyone when he approached Nejedlý and offered a toast in his honour. He did this to show Beneš that he could be replaced and put him under pressure, which might have played a role in Stalin’s strategy.”

Nejedlý only became a member of the Communist Party during the war, and in 1945 he returned as the Communist minister of education. However, he was disappointed that he had not been chosen for the top post, as Stalin had hinted.

“He was very conceited and ambitious and in fact believed the idea, which was very attractive to him. He mentioned it to several people who said he thought he could return home as president, just like President Masaryk did in 1918.” 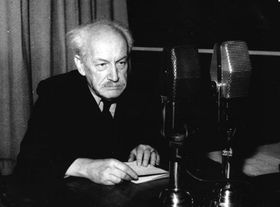 Zdeněk Nejedlý, photo: Czech Radio archives Although Nejedlý was not considered one of the big players in post-war Czechoslovak politics, or even in the Communist Party itself, he proved very useful for their purposes. Until the end of the 1930s, the Communists were very critical of any national aspects, instead pursuing what they called proletarian internationalism. That changed somewhat after Hitler’s rise to power, but it was Nejedlý who provided the Communists with an ideology that linked the movement to Czech historical traditions. That was a crucial move, says Jiří Křesťan.

“The Communist coup in February 1948 did not take place under a slogan of a Communist revolution but under slogans of defending the nation against its enemies. So this concept was very useful. And it also reflected some streams within Czech thought which were perhaps more sensitive to social issues and equality. But at the same time, Czechs also have a soft spot for strong leaders, which is where Stalinism could in fact connect with Czech traditions. And I believe this also has certain potential for the future, too.”

After the 1948 Communist takeover of Czechoslovakia, Nejedlý again became education minister. He oversaw purges at universities and other institutions, although his views on education differed from what the Stalinists had in mind. Nejedlý in fact pushed through education reforms which Jiří Křesťan says were comparable to those introduced in some western democracies at around the same time.

“Education was a familiar field for him and he actually helped draft legislation that had several progressive features even compared to school legislation adopted at the same time in the West. The problem was that it was approved shortly after the Communist putsch, and before long, Communist hardliners attacked the law because they wanted to adapt the education system according to the Soviet model. Nejedlý opposed this, albeit not very openly, but he did try to prevent the new school reform which took place in 1953. However, he was not successful and ended up being dismissed over his objections. That’s a little known fact about him.”

The 1950s brought Communist terror, show trials and labour camps. Several students of the Litomyšl grammar school were tried for their alleged crimes against communism. Nejedlý personally knew some of the defendants, but he refused to stand up for them because he literally feared for his own life. Zdeněk Nejedlý statue in Litomyšl, photo: Petr1888, CC BY-SA 3.0 “In the 1950s when the show trials began here, he was really scared that he could also be arrested and that his own work would be destroyed. According to some accounts from the people around him, he could not stop thinking about this. Out of fear, he reacted by attacking those who were already sentenced. This was even more despicable, because he personally knew many of the people sentenced in the show trials. But he did it, and feared that the machinery would destroy him as well.”

Jiří Křesťan’s biography reveals Zdeněk Nejedlý as a tragic figure of Czech history, as an ambitious man who was haunted by his shortcomings but never found the strength to oppose what he knew was wrong.

“This is exactly where I see the tragedy of an intellectual who gets pulled along by events and does not have the strength to break away. His story reflects the development of Czech society from the late 19th century to the start of the 1960s, with all the twists and turns. It very much helps us understand why so many intellectuals took up the cause of communism, and how they later suffered serious disillusionment.”

Zdeněk Nejedlý died in 1962, but his controversial legacy continues to be the subject of debate even today. In 1978, his statue was erected in his native Litomyšl to mark the 100th anniversary of his birth. After the fall of communism, the town’s council decided to keep it where it was. However, it added a plaque to the monument which reads: “He propagated and harmed Czech culture, honouring and shaming his native town which appreciates the good and condemns the bad of his deeds.”