Ossuaries, grim collections of mostly medieval bones, are to be found all over Europe, with one of the most striking examples anywhere being the infamous Sedlec Ossuary in Kutná Hora, sometimes called one of the spookiest places in the world. Only ten years ago though, archaeologists working under the streets of Brno discovered a crypt that would earn a new claim to fame; the largest collection of human bones in the country and the second largest in Europe after the Paris Catacombs. 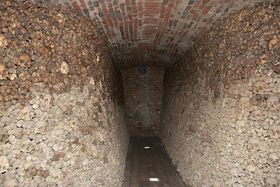 Brno Ossuary, photo: Jiří Vaňáček, Creative Commons 3.0 In 2001 the authorities in Brno ordered archaeological research to be carried out on one of the city’s central squares, Jakubské náměstí, so that structural modifications could be done. The archaeologists knew that digging in the area of the 13th century Church of St James, from which the square takes its name, would yield interesting finds. They also knew that the square had been built over the church’s cemetery some two hundred years before. But what they actually uncovered, they said, exceeded their wildest expectations. Aleš Svoboda is the author of two books mapping the hidden side of the Moravian metropolis and took part in the research. Not only did they find bones, they found bones everywhere they looked. 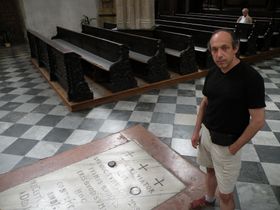 Aleš Svoboda, photo: Vilém Faltýnek “The graves were on top of each other in several layers. There wasn’t enough room in the cemetery so the deceased were buried and once their bodies had decayed after ten to twelve years, their skeletons were removed and someone else was buried on the spot. So after twelve years they were given a so called second funeral in ossuaries. Every large cemetery had an ossuary, and the Church of St James had several.” 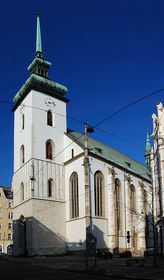 The Church of St James, photo: Petr Šmerkl, Creative Commons 3.0 The largest of them was enormous and was beautifully preserved, lying under where the square is today. Further research showed that one of the corridors led under the church and connected a large crypt that also served as an ossuary, with three rooms and located directly under the nape of the church and spanning 25 metres. In the three large rooms there were thousands to tens of thousands of human skeletons.

“Right now we’re standing over a stone slab in the floor of the nave of the church that covers the stairway down to the ossuary. This entrance was known but no one knew just how large the ossuary below was. When the ossuary became full in the 18th century, it was so full that the bones even covered the stairway. It was impossible to climb down to determine its dimensions. It was only when we opened it from the other side that we found out how massive it is.”

The last time the stone had been lifted was before the Second World War, when new tile was being put down in the church. That time a photographer went in and the level of the bones had gone down a bit. He only took two photographs, one of each side of the crypt, but they only showed what his lens could see.

“It wasn’t until 2001 that our research showed the full extent of the ossuary. When we measured the entire space, we estimated the number of skeletons here in cubic metres, and we came up with an unimaginable number. There were more than 50,000 of our ancestors there. That number makes this the second largest ossuary in Europe, the first being the Paris Catacombs, where hundreds of thousands or millions of people were buried.”

The cemetery beneath Jakubské náměstí was in use for more than half a millennia, and the oldest skeletal remains come from the 15th to the 16th century. But research into the oldest sections, located directly under the church, is still underway ten years after the initial discovery because of the difficulty of finding funding – which eventually came from the EU – and jurisdictional problems arising from the ossuary lying party under the square, on municipal grounds, and mostly under the church. In any case, everyone can be glad that the find was made when it was. 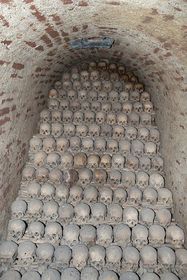 Brno Ossuary, photo: Jiří Vaňáček, Creative Commons 3.0 “If we hadn’t made the discovery, there would have been problems. The skeletons continue to decay. When we got through to the area of the ossuary the situation inside was dismal. Because of dampness and mildew which had crystallised on the remains, the bones continued to fall apart and the level of the heap was decreasing. In a couple more decades it would have decreased enough to create a cavity that would have jeopardised the surface; someone could have fallen through. With the trams going overhead, there could have been a tragedy.”

Since the discovery, Mr Svoboda has been working with the authorities to resolve these problems and protect the 800-year-old ossuary. One of the proposed ideas, to pour cement slurry over the bones to reinforce and preserve them, was deemed absolutely unacceptable. So the researchers chose the opposite solution of bringing all of the bones out and storing them in the many cellars in the area, repairing the structure and ensuring the structural integrity of the church, and putting down a new floor with lighting.

“For ethical reasons and for the sake of reverence we then began returning the bones. Using the methods of our forbearers we then piled the bones very carefully into configurations. But we did it in such as way as for everything to be well ventilated and not decay."

For the time being – which has been a long time now – the ossuary is open only provisionally, with access to specialists and special excursions. The only way to reach the tomb is through ladders in hatches in the pavement. The EU funds are meant to include the construction of an entryway from the square. The current plan foresees a public opening at Christmas of 2012. But meanwhile, as work continues, new discoveries are still being made.

“When we got to the lowest strata we found that the original level was used for burial and not for depositing bones. We found a number of coffins, some of which are even decorated, but we still don’t know their content because there is still a lot of debris to be removed before archaeologists can study them. So right now the coffins are being cleaned off and not one has been opened yet, so we are very interested to see what will be inside.”

The researchers expect that the graves hold prominent townsmen or clergymen connected to the church. That mystery should be uncovered in the next month as the coffins are cleaned and will be presented to the public during the summer. But it will likely be the last mystery that the Brno Ossuary has to offer, as probes have found only normal earth beneath it. For the future, Mr Svoboda envisions a very special place of for homage to the history of the location and the 50,000 souls interred there.

“There is going to be an exhibition of the remains along with the sacral artefacts with which the people were buried, accompanied by artworks to supplement the contemplative spirit of the place. It is a spiritual exhibition in which we want to show how people were interned and the history of the church as found underground. It will be a collection of the items and information found in the ossuary, but it will not be an attraction for mass tourism. We have to preserve the reverence of the place, and so visits will be limited in duration and size out of respect for the dead that are buried there.” 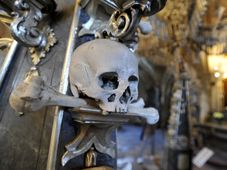 Restorers to bone up on skills for Kutná Hora ossuary makeover

Containing thousands of human bones arranged in various shapes, including a chandelier and coat of arms, an ossuary outside the Central… 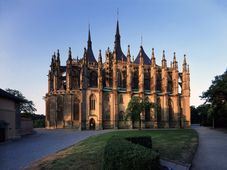 Without question the town of Kutná Hora in central Bohemia is a must-see destination for anyone visiting the Czech Republic, a town…