Czech senators deprived their colleague, Vladimir Zelezny, of parliamentary immunity last Thursday, making it possible for the police to investigate him on fraud charges. The Zelezny case has highlighted flaws in the Czech immunity law, which gives members of parliament stronger protection from prosecution than that enjoyed by legislators in other European countries. The Czech government wants to change the situation. 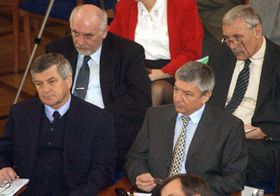 Vladimir Zelezny (right), photo: CTK The case of Senator Vladimir Zelezny, who until recently owned and now runs the popular television channel TV Nova, is not the first case in which a Czech legislator has been stripped of his or her immunity. Nevertheless, some politicians themselves think that the immunity enjoyed by Czech senators and deputies is far too strong. Work is underway in the government and parliament to change the situation. Chairman of the Senate Mandate and Immunity Committee Jan Hadrava is a strong advocate of such change.

"The immunity is too strong. To a certain extent immunity is a privilege that places members of parliament in a special situation compared to other citizens. There are some reasons for this privilege - it is designed to protect parliament against government pressure and intimidation aimed at influencing the decision-making of parliament and individual MPs. This is how immunity is understood in Europe."

In the Czech Republic, legislators cannot be prosecuted for crimes they are suspected of committing while in office without parliament's approval. This immunity is for life, though it does not apply to any offences committed after their mandate expires. According to Mr. Hadrava, the situation could change within the next year and a half.

"These are constitutional changes so it is important to reach a consensus of all political parties, as the adoption quorum in this case is higher than with other laws. The government is preparing an amendment to the Czech constitution and this is part of it." 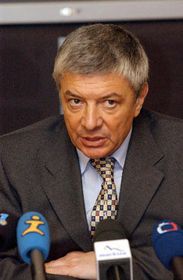 Vladimir Zelezny, Foto: CTK After a four-hour discussion last Thursday, 61 of 80 senators present voted to satisfy the police's request to give Mr. Zelezny up for investigation. The TV magnate is being investigated for damaging a creditor and tax evasion. If convicted, he may face several years in prison. In 1999 Mr. Zelezny split from his foreign investors without paying them their share. A litigation followed and the International Court ruled that Mr. Zelezny must pay his former partners 1 billion crowns or around 300 million euros. Police suspect that Mr. Zelezny rid himself of his immense property in order to avoid paying the debt. For the same purpose he is said to have concluded a speculative agreement with a company in Liechtenstein. Besides this, in 2001 Mr. Zelezny brought into the country several valuable paintings and allegedly failed to pay the customs duty. For his part, Mr. Zelezny insists that the Senate's decision to lift his immunity was politically manipulated. Mr. Hadrava says it is not up to the Senate to judge Mr. Zelezny, but that the court must decide whether he is guilty or not.

"The core of the case is very complicated and we will never investigate it because we are not judges and it is not our job."

Once senators decide to lift the immunity of any of their colleagues the decision cannot be reversed. Even if convicted, a senator does not lose his or her mandate according to the current law.