Zaorálek concedes Prague may be outvoted soon on quota issue

The Czech Republic is one of a small number of member states holding out against European Union plans for a quota system to share refugees around the bloc. The country’s foreign minister, Lubomír Zaorálek, plays down talk of Brussels withdrawing funds from states that refuse to accept set numbers of migrants – but concedes that Prague may be outvoted over the matter in the not too distant future. Thomas de Maiziere, Angela Merkel, photo: CTK The Czech Republic and Slovakia are among the opponents of an EU plan that would see 160,000 refugees spread among member states under a binding relocation quota system. They argue that states should take in asylum seekers on a voluntary basis alone.

Tensions over the issue are escalating. German Interior Minister Thomas de Maiziere on Tuesday slammed what he called the “opportunistic behaviour of the minority” and suggested Brussels pressure them by threatening to withhold EU structural funds.

This idea had previously been floated by the president of the European Commission, Jean-Claude Juncker.

However, speaking on Czech Television, the Czech minister of foreign affairs, Lubomír Zaorálek, played down the danger.

“That has been spoken about. But for me it is not at the present time the position of Mrs. Merkel. The European Commission hasn’t said it either. It isn’t good to threaten one another like this. But the debate can be tough and complicated.” 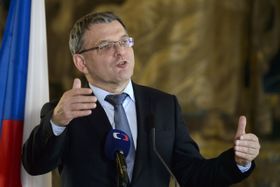 Lubomír Zaorálek, photo: CTK Czech leaders have long said that if the quota scheme is pushed through it will be virtually impossible to ensure that “its” refugees actually stay in the country. After all, the Czech Republic has never been a popular target country for migrants.

Though this argument perhaps presupposes the Schengen zone returning to business as usual, it was repeated by the country’s foreign policy chief on Tuesday night.

“I can’t imagine, and neither can my Czech government colleagues, how we will order these people to remain in the Czech Republic. Whoever says this isn’t a problem is wrong. We contend that they will leave this country, because if they have relatives elsewhere, and so on, then we won’t keep them here.”

Brussels would like the quotas debate to end in consensus rather than rift. However, a unanimous vote on the quota plan is not required and, with all the major players behind the idea, the decision can be made by a qualified majority.

Lubomír Zaorálek conceded the possibility of this happening soon. 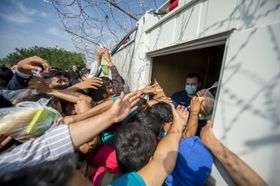 Photo: CTK “It is possible that a summit of interior ministers next Tuesday will decide on the matter in a vote in which the majority decides… If this happens, that council of ministers really does have the powers to decide on the issue. Then the members of the union will have to respect it.”

If the proposal is pushed through, the Czech Republic will be required to take in around 3,000 asylum seekers in the next two years.