Wild animals contribute to conservation at former military base

The former military base in Milovice, northeast of Prague, is gradually being turned into a patch of wilderness. A herd of 14 wild horses from Britain’s Exmoor National Park was introduced into the area in January of this year within a project initiated by the Czech Landscape organisation. And recently they were joined by seven European bison from Poland. I asked Miloslav Jirků of the Czech Academy of Sciences, about this latest stage of the nature project: 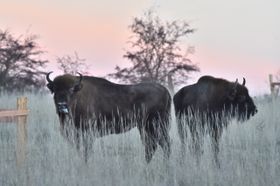 European bison, photo: CTK “The seven European bison were released in an acclimatisation pan. The bull will join the girls in just a few days. They all come from Poland from three different breeding reserves and they will be soon released into a 105 hectares nature reserve.

“The bison, together with Exmoor ponies, which will join them in a few weeks, are supposed to maintain the reserve by grazing.

“European bison inhabited the Czech Republic until the late Middle Ages. The most recent bone finding is from the fourteenth century and written records of bison date back to the sixteenth century.”

You have previously introduced other animal species, the Exmoor ponies and also the-so called Aurochs, which were selectively bred to resemble the original wild animals which went extinct in the 17th century. Is it common to have these three species on one territory?

“No, such a thing is quite unique. As far as we are aware, the former military range in Milovice near Prague is the only locality where all the three large grazers live together. 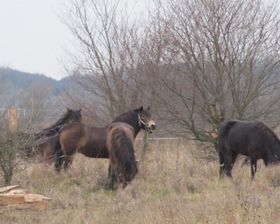 Exmoor ponies, photo: Michal Trnka “However, as the individual reserves, because we are talking about two different sites, are still relatively small, the aurochs and the bison live separately, but both live together with the Exmoor ponies.”

You introduced the Exmoor ponies into the area at the end of January this year. How are they doing?

"They are doing very well. They adapted perfectly to the new site and to the different vegetation."

And as far as I know one foal has already been born. Is that right?

"That’s right. It was completely unexpected but a very nice surprise, but there was already one foal born this fall."

One of the main aims of the project was to preserve wild insect and plant species by letting the large animals graze on the aggressive plants. Have you already noticed some changes? 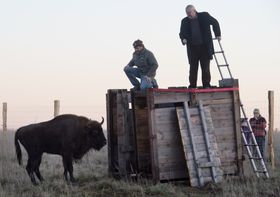 Photo: CTK “Definitely. The positive changes of vegetation are strikingly fast, much faster than we expected, actually. For instance the aggressive grass, called bush-grass, was significantly reduced and the ponies prevented its reproduction this year, which was one of the most desired results.

“And what makes us really happy, is that the two symbols of the locality, the highly endangered plant called cross gentian and the Alcon Blue butterfly, which is almost extinct in the Czech Republic, both reacted immediately to the grazing and their populations have increased in size.” 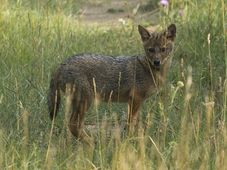 Just one year ago, a photographer snapped the first-ever photo of a golden jackal on Czech soil. This week, a camera trap in the Milovice… 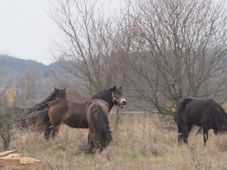 Eleven Exmoor ponies from Great Britain should soon be grazing the meadows of the national park Podyjí in South Moravia. The horses… 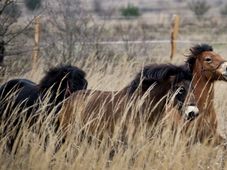 After centuries, wild horses may return to the Czech landscape. Fourteen Exmoor ponies from Great Britain were shipped to the Czech…