On July 1, 1991, the Warsaw Treaty was officially dissolved and 36 years of Czechoslovakia’s military alliance with the USSR came to an end. As a consequence, Soviet troops stationed in the country during the 1968 invasion were gradually withdrawn – an anniversary that the Czech NGO Opona is celebrating with a series of events entitled Week of Freedom, starting Monday. Sarah Borufka spoke to David Gaydečka, one of the organizers of Freedom Week about the events planned. 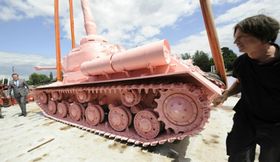 David Černý, photo: CTK “One of the main reasons is that we are celebrating the 20-year-anniversary of the withdrawal of Soviet troops from ex-Czechoslovakia and also the dissolution of the Warsaw pact in 1991.”

Which events are planned for the Week of Freedom?

“The events start today, the legendary pink tank is coming back to Prague to mark the anniversary. Nowadays, it is an art piece. It was a tank that the Soviet forces put in the center of Prague, after the Second World War, to commemorate the help we received from them.

“But in 1968, the Soviets invaded Prague and they stayed here till 1991, and before they left, the famous Czech artist David Černý painted it pink to celebrate that the invasion was over. So we are bringing this tank, and it will float on a platoon on the Vltava River, close to Charles Bridge, so that everyone can see it again after 20 years. That’s the first event that is happening, scheduled for today. 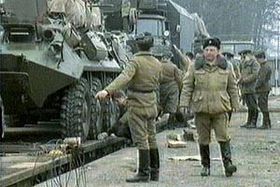 “And then, there are more events coming up. In part, the Week of Freedom is supported by United Islands, so there are some special artists coming from countries where there still is no artistic freedom. We have forbidden Cuban punk rock musicians coming, we have Afghani rappers and a Russian MC coming with a ska group, and after that there are some more serious events.

There is a conference on the Warsaw Pact, which is taking place in the building of the Foreign Ministry, and is organized by the Foreign and Defense Ministries, in cooperation with Opona, the organizer of the week of freedom. This will be visited by former politicians and leaders and people who played an important role in the end of the Warsaw Pact, and also historians will be in attendance to discuss the future of Europe.”

Opona also organized a commemorative march on the 20-year-anniversary of the November 17 uprising. Why did you think is it important to mark the anniversary of this event, and do you think that young people today might not realize the significance of it?

“I think that if I were a bit younger, I would not be acknowledging what happened in the past as much. I remember in the 80s, when we were learning about WW II in school, which had ended some 30 years before, for me it was something that was really an event of the past, and it didn’t have any strong meaning.

“After learning more about it and meeting people who remembered it, it meant much more and I feel that it is the same for our generation, the anniversary of the fall of the Iron Curtain and the withdrawal of the Soviet troops is as important to us as the Second World War anniversaries, maybe even more important.” 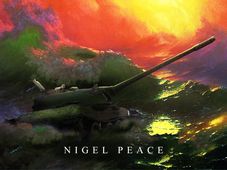