An international conference entitled Europe – Whole and Free? concludes in Prague on Tuesday, commemorating the end of the Warsaw Pact. Hosted by the Czech Foreign and Defence Ministries, the conference over two days brought together former officials from both sides of the Cold War to share their views of past events. It also highlighted ongoing divisions between Russia, and the former Soviet satellites in Central and Eastern Europe. 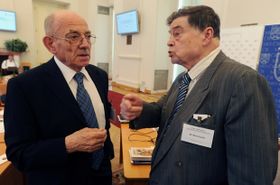 Luboš Dobrovský, Boris Pankin, photo: CTK Former Soviet leader Mikhail Gorbachev sent a message to the international conference, which was read by Boris Pankin, the former Soviet ambassador to Czechoslovakia. In it Mr Gorbachev said that despite the great achievement of the dissolution of the Warsaw Pact, the enlargement of NATO was a relict of the Cold War.

Mr Gorbachev statement, read out in the very same hall where Warsaw Pact was disbanded in the summer of 1991, illustrates the continuing divide between Russia and its former satellites in Central and Eastern Europe.

While Czechs, Slovaks, Hungarians and citizens of other former communist countries view the events of 1991 as a crucial step towards their freedom and security, many Russians continue to regard the Warsaw Pact dissolution as a loss. Luboš Dobrovský was the Czechoslovak defence minister between 1990 and 1992 before serving as the country’s ambassador to Russia.

“The spirit of the Warsaw Pact, or nostalgia for it, has not completely disappeared from the minds of some Russian officials. When you look at Mr Putin’s official biography issued ahead of the first presidential vote, you’ll see he regrets very much the fact that Gorbachev conceded the loss of the Russian, or Soviet, position in Europe, which in Mr Putin’s opinion distorted the outcome of the Second World War.” 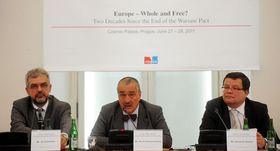 “The end of the Warsaw Pact reinforced security from Vladivostok to the English Channel, which is no small achievement. People who are sitting here today were back then either on the Western side, or the East. But now, we can talk candidly about the future as well as about the past.

“I hope that today’s politicians, including those who are here, will have the same courage and responsibility as their predecessors 20 years ago. Freedom and peace are never free.”

Former US undersecretary of defence, Paul Wolfowitz, compared the events of the early 1990s in Europe to the Arab Spring which has shaken the status quo across the Arab world. However, Mr Wolfowitz regretted that former communist countries are doing little to help the Arab people in the struggle for democracy. 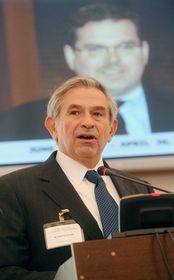 Paul Wolfowitz, photo: CTK “I happen to agree with former president Havel’s recent observation that it will be even harder for those countries to build free institutions than it has been for the former communist countries. In my view, that is all the more reason why we all should be doing as much as possible to help them.

“And here I have to say I’m frankly surprised that the former Warsaw Pact countries, who have such a clear understanding of what it means to achieve freedom and of the difficulties of doing so, seem to be largely absent.”

The conference, which concludes on Tuesday, is part of the Week of Freedom, an event commemorating the withdrawal of Soviet troops from Czechoslovakia. More details can be found at www.oponaops.eu. 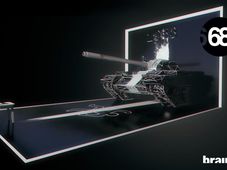 To mark the anniversary of the Soviet-led invasion of Czechoslovakia of 1968, Czech Radio’s Creative Hub Group, in cooperation with… 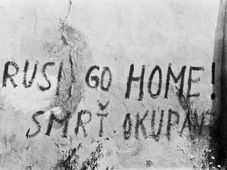 The 1968 invasion: When hope was crushed by Soviet tanks

On August 21, 1968 the citizens of Czechoslovakia woke to learn that their country had overnight been invaded by Soviet-led troops,… 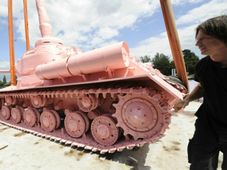 On July 1, 1991, the Warsaw Treaty was officially dissolved and 36 years of Czechoslovakia’s military alliance with the USSR came…