EU interior ministers on Monday failed to reach agreement on mandatory quotas for the redistribution of 120,000 migrants across the EU. Efforts by West European states to get firm commitments and a timetable for redistribution were blocked by the Czech Republic and three other Višegrad Group states which have refused to accept mandatory quotas on the argument that they simply will not work. 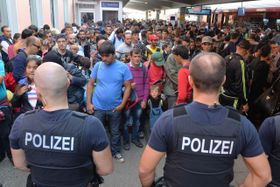 Photo: CTK Emotions ran high in Brussels on Monday night as interior ministers thrashed out the controversial issue of mandatory migrant quotas in the face of continued opposition from four former Eastern bloc states. Even the argument that failure to agree on a common plan could wreck the Schengen open border system failed to produce a breakthrough. The Višegrad Group, comprising the Czech Republic, Slovakia, Hungary and Poland, remained adamantly against the idea of imposed quotas, arguing that they were ill-conceived and were not a solution to the problem. Czech Interior Minister Milan Chovanec:

“The arguments in favour of quotas revolved around the principle of solidarity. We are not resisting solidarity, but we are stressing the need to find a responsible, viable solution to the migrant crisis and we keep pointing out that this mandatory redistribution of refugees will not work. The refugees arriving in Europe do not want to stay in the Czech Republic and we do not see how we can keep them here against their will. The redistribution plan proposed by the EC is an empty political proclamation that will merely satisfy short-term media and public demand but will not resolve the problem. It would be dishonest to support that.” Milan Chovanec, photo: Filip Jandourek On Tuesday the depth of the rift became even more apparent as Interior Minister Chovanec accused Berlin of being directly responsible for the present chaos in Europe due to its inconsistent policy on the migrant issue in first making generous open-door policy proclamations and then reintroducing border controls. The interior minister also criticized Brussels for failing to respond quickly enough to the emerging crisis by securing the EUs outer borders in order to prevent a situation where individual member states are taking unilateral measures on their own territories.

Asked whether the Czech Republic did not fear a pay-back for blocking the EU agreement on migrant quotas Interior Minister Chovanec had this to say.

“There are times when you need to put up a fight and defend your views and we are convinced that we are right about this. This is not about unwillingness to help or cooperate. We have supported all other EU initiatives in this matter– the registration hot spots, military operations at sea, securing the EUs outer borders, helping set up refugee camps in the region of the conflict. All that we are saying is that mandatory quotas in Europe will not work. And unless we can come up with a solution that works the situation in Europe will rapidly deteriorate. That is our thinking. I do not know if it will trigger a pay-back, I hope not, but if it does, then it can’t be helped.”

At the end of several hours of stormy negotiations the meeting of EU interior ministers refrained for taking a vote on the proposed plan although the countries backing it would have been able to push it through on a qualified majority. Instead a decision has been postponed until October 8th in the hope that more time will open the way for a compromise. 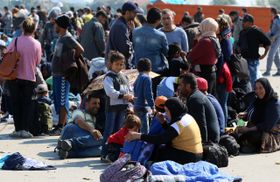 Photo: CTK Although the Czech Republic has called for a top-level EU summit on the matter, the decision whether to call it is in the hands of the President of the European Council Donald Tusk. A top level summit gives individual countries right of veto meaning that its chances of reaching agreement are even smaller and with individual borders in Schengen now closing the EU needs to act as fast as it can.