Christmas Eve is the most important festive day of the holiday according to Czech tradition. Although known as the “generous day” – Štědrý den – when it comes to food, one is meant to be quite modest. Few fast all day on December 24 but many do follow the Christian custom of eating meatless dishes for lunch that day, spruced up with a plaited Christmas sweetbread – vánočka. 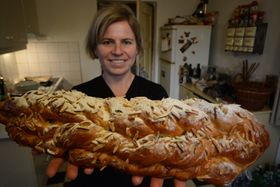 Photo: archive of Eva Turečková The name Vánočka derives for the word for Christmas – Vánoce. The first written mention in the Czech lands of such a special festive Christmas sweetbread was made by the Benedictine monk Jan of Holešov, in his 15th century Treatise on Christmas Eve. According to his interpretation, the plaints symbolized the Christ Child wrapped in cloth.

Some Czechs spend days practising how to plait the braids – nine in all, in three layers. The bottom layer of four strands represent the earth, sun, water and air; the middle layer of three strands symbolises reason, will and emotion; and the top layer of two strands, love and wisdom – bringing people closer to God.

That said, some enduring symbolism attached to the notoriously difficult-to-prepare treat seems more grounded in Pagan rather than Christian beliefs. Many Czechs still leave this delicacy to the professionals.

“When the winter solstice came, people were afraid the sun would disappear forever. The vánočka braids symbolized a rope that they hoped would attract the sun, and somehow keep it from going away.

“The sweetbread’s history (as a Christmas staple) dates back to the 16th century, when only members of the bakers’ guild could bake it. But it was not until the 18th century that people started baking vánočka at home.

Every Czech family has a vánočka recipe, but most add slivered almonds and raisins, preferably sultanas, to the leavened dough, and bake into the plaited loaf a shiny coin minted in the outgoing year, which brings health, wealth and happiness to its finder. Lemon rind and rum are added for colour and flavour, while the icing on the cake, so to speak, is a dusting of powdered sugar atop an egg-and-butter glaze. 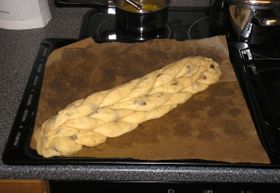 Photo: archive of Radio Prague International As for the strands, the first tier is the most difficult to get right because it should be a plait of four strands. All the while, the baker – traditionally the mistress of the house – must wear a white apron and a headscarf, hold her tongue throughout – and jump up and down by the oven.

“So that the dough would rise, you had to, or should, jump as it leavened. When I think about it, my mother would always say, ‘The dough jumped well’ or ‘The dough jumped badly.’ So, I guess jumping was meant to make it nice.”

In olden days, the first successful vánočka would be presented as a Christmas gift to one’s landlord or landowner, in the case of tenant farmers, as a sign of respect.