Vaclav Havel was back in his original role as playwright on Wednesday, when, at a theatre in Prague, the former Czech president presented the book form of "Odchazeni", or "Leaving". The long awaited and widely discussed play will appear in the bookshops in less than a two week's time. However, Mr Havel's first new play in 18 years will not be premiered until the end of May or the beginning of June. 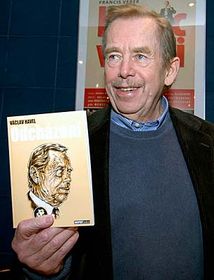 Vaclav Havel, photo: CTK "Odchazeni" is a story of a man leaving a high-ranking political position and moving out of his state villa. Naturally, people associate the story with Havel's own departure as Czech president in 2003. But the former dissident insists it has nothing to do with his life, as he started to write it way back in the 1980s, when he didn't know he would one day become the president of Czechoslovakia, and later the Czech Republic.

"I think some journalists or viewers may try to see it this way. But I don't think producers will do that. Because I am in contact with them and I explain a lot to them, especially if they are from this country."

On the other hand, Vaclav Havel admits that years in the presidential post provided him with various situations and motifs. He also found inspiration in Shakespeare's King Lear and Chekhov's The Cherry Orchard. Vaclav Havel says it can address any kind of audience.

"Odchazeni was written, just like my previous plays, for everyone who is interested and who will come to see it. My pieces have been staged all over the world for all kinds of audiences. But we don't have to conceal the fact that drama, especially this one, is a minority genre. Most people don't go to the theatre nowadays. They prefer to watch the television. Now they also have the Internet or they go to the cinema." 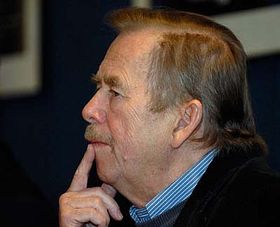 Vaclav Havel, photo: CTK Odchazeni previously received a lot of coverage after Mr Havel withdrew the play from the National Theatre since it refused to cast his wife Dagmar in the leading role. Neither did he come to an agreement with the theatre he is most closely associated with - divadlo Na Zabradli, which he said was too small for his play. In the end, he agreed to stage it at the Na Vinohradech theatre and seems to be confident that it was a good decision:

"I always get a little bit nervous, but not too much. After all those years I have grown used to it. I have seen various stagings of my plays and some of them were really grotesque. But I believe it can turn out really well at the Na Vinohradech theatre."

Even before it hits the bookshops, Odchazeni is already being translated into English and other languages.