Václav Havel gets space amongst greats in US Congress

The late Czech president, dissident and playwright Václav Havel was honoured by members of the US Congress on Wednesday. A bust of Mr Havel was unveiled at a ceremony in the U.S. Capitol in the presence of Czech Prime Minister Bohuslav Sobotka and Havel’s widow, Dagmar. The ceremony concluded a series of events marking the 25th anniversary of the Velvet Revolution in Czechoslovakia, which toppled the Communist regime. Photo: CTK Billy Gibbons of ZZ Top performed in front of US Congressmen and women in honour of the late Czech president Václav Havel, who was known for his love of rock and jazz music. The ceremony, hosted by the speaker of the House of Representatives, John Boehner, was also attended by former U.S. secretary of state Madeleine Albright as well as Nancy Pelosi, minority leader of the United States House of Representatives and the Czech Chamber of Deputies chairman Jan Hamáček.

John Boehner said it was a poetic, but paradoxical honour for a man who in his own words lived a paradoxical life:

“Here was a writer who exposed the Communists using a one weapon that they could not match and that was the truth. For this he received three stays in prison, countless interrogations and constant surveillance, but he kept on writing, hiding pages of his manuscripts throughout his home. Offered a chance to flee to the West, he refused in saying “I am simply a Czech bumpkin through and through”.

In his speech, Czech Prime Minister Bohuslav Sobotka recalled the words of Václav Havel from his famous address to the nation on New Year’s Eve on January 1, 1990, when Havel said “No one who had paid the price for freedom should be forgotten”.

“By unveiling the bust of Václav Havel we pay homage not only to him but as he befittingly described it, to each and every one who refused to bend down before pressure and fought for freedom, despite a threat of imprisonment, suffering and death. To each and every one, who raised his or her voice like the Czech writer and playwright Václav Havel.” 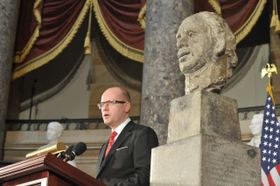 Bohuslav Sobotka, photo: CTK Mrs Dagmar Havlová, the late Czech president’s widow, helped unveil the actual statue which was created by Czech-American sculptor Lubomír Janečka. After the dedication in the National Statuary Hall, the bust will be added to the Capitol’s Freedom Foyer.