A US military convoy will arrive in the Czech Republic at the weekend and is expected to be met by both supporters as well as demonstrations in areas, divided over NATO membership over Russian intervention in Ukraine. Critics charge that opposition to the convoy has been artificially whipped up by groups long opposed to NATO membership. A poll conducted by the STEM agency released on Thursday suggested that in fact a vast majority of Czechs – 82 percent – had no issue with the convoy travelling through Czech territory. Photo: CTK All the same, unexpected developments can never be ruled out. In terms of logistics, also, the US military is well aware of potentially tricky areas where the passage of the Stryker combat vehicles could be more difficult. Czech Major Martin Vlkovský:

“Problem areas such as potential bottlenecks or bridges are of course known in advance so these have been planned for. In the event of an unexpected problem, alternative routes are also known but those have not been revealed for strategic reasons.”

The military convoy with just under 120 vehicles and some 500 personnel will enter the country in three separate columns in the north, making its way to an outer district in the Czech capital before travelling to Plzeň and the Rozvadov crossing into Germany. Before then, the convoy will spend four days and three nights in the Czech Republic, during which locals are planning events or rallies in favour or against.

Prague café owner Martin Kotas is an organizer of an event where demonstrators will symbolically call on the US military not to get out, but to stay. By contrast, the No to Bases Initiative (first founded in opposition to a now defunct missile defence shield originally planned by the Bush administration) has sided with the country’s Communist Party in opposition to the temporary military presence. Jiří Vyvadil, photo: Šárka Ševčíková A spokeswoman for initiative has been quoted by the Wall Street Journal calling the convoy “a NATO provocation and a dumb flexing of muscles”, while Communist Party supporters and one initiative, Friends of Russia, blame primarily the US and NATO and not Vladimir Putin for the escalation of the situation in Ukraine. Its head, former Social Democrat senator Jiří Vyvadil said this on a debate programme on Thursday:

“It is a dumb provocation. I can understand that there are countries, the Baltics and Poland, which are happy to see such a show of strength but it makes no sense here.”

In the Baltic states and Poland, sharing borders with Russia, support for NATO’s operation Atlantic Resolve – showing unity in the face of Russian intervention – appears to have been more clear cut. Czech independent journalist Pavel Šafr, who supports a pro-NATO stance, meanwhile, says there is nothing wrong with the convoy and called the vein of anti-Americanism which has cropped up a holdover from the country’s communist past. 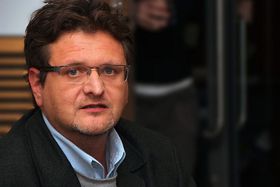 Pavel Šafr, photo: Alžběta Švarcová There is no question in the Czech Republic that the journey by the US convoy has been heavily politicised and the divisions are apparent. There is also a general concern that opposition to US troops by some will cast the Czech Republic in a poor light. The Defence Minister Martin Stropnický at one point expressed embarrassment over the situation, arguing this was not the time for the debate to descend into Švejkism – a pejorative term related to the great Czech anti-war novel, The Good Soldier Švejk. The word means shirking commitment or responsibility, in this case, to NATO partners.