Unrest at the Bělá asylum facility north of Prague at the close of last week, in which migrants repeatedly tried to force their way out of the enclosed premises, breaking two security gates in the process, has raised public concern with regard to the growing number of illegal migrants on Czech territory and the country’s preparedness to deal with the migrant crisis. 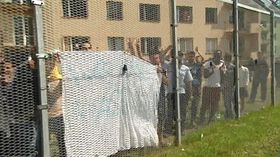 Bělá pod Bezdězem asylum facility, photo: ČT24 The revolt at Bělá, in which around 60 migrants repeatedly attempted to escape from the closely-guarded facility, was the first sign of serious trouble and an indication that matters could get out of hand. After the first unsuccessful revolt on Thursday Interior Minister Milan Chovanec visited the facility to talk to the inmates, mostly from Afghanistan, Syria and Iraq, who are due to be returned to Austria or Hungary, where they had filed for asylum. They demanded to have their money and mobile phones returned and to be allowed free passage to Germany. The interior minister rejected their demands saying they contradicted Czech and European asylum law and stressed that as temporary guests in the Czech Republic migrants must respect the country’s laws. Less than an hour after his departure the migrants demolished furniture and smashed windows in protest, making another unsuccessful attempt to force their way out of the premises. Police re-enforcements from Prague were called to help deal with the situation and the interior minister ordered tightened security around the asylum facility on a permanent basis.

News of the unrest made the prime time news and, in an interview for the tabloid paper Blesk on Sunday, President Miloš Zeman took a tough line on the migrant issue. This was his message to illegal migrants.

“Firstly, no one invited you here. Secondly, since you are here, you must respect the laws of this country as we do when visiting your homeland, and thirdly, if you don’t like it – leave.”

The president spoke out in favour of even tighter security, noting that (as Commander-in-Chief of the Czech Armed Forces) he had information that the army was ready to send 1,500 troops to secure the country’s borders against the flow of illegal migrants. He stressed that while his position may seem uncharitable it was no different from the efforts of other countries seeking to protect themselves from illegal migrants – such as Hungary’s attempts to make safe its border with Serbia or the US-Mexico border fence.

The use of soldiers to protect the country against an uncontrolled flow of migrants would have to be approved by the government at the request of the Interior Ministry. Interior Minister Milan Chovanec has made no indication this would be necessary for the time being, but he has ordered increased security checks in the border areas and has asked for more funds for the foreign police. Moreover, as the flow of illegal migrants grows and with the Czech Republic due to take in several hundred more migrants each year under an official agreement within the EU, the country’s restricted asylum facilities are proving inadequate. The facility at Bělá was expanded so as to be able take in 700 migrants, and a similar facility near Brno can accommodate 170, but the country will need to open new facilities elsewhere.

Interior Minister Milan Chovanec said he had requested all government institutions to offer suitable buildings they could dispense with for this purpose and was now studying the possibilities. Finding suitable premises will not be easy. The Czech Republic is due to take in 3,500 more migrants this year and between 5,000 and 7,000 in 2016, not counting the ones who cross the border illegally. The prospect of integrating so large a number of migrants from a culturally different background has evoked public concern which was only fuelled by the unrest at Bělá. The mayor of the nearby town Milan Lomoz told Czech Television people were increasingly worried.

“The migrants are from a culturally different background which means that people do not know what behaviour to expect from them. And when townspeople see what they see on TV – the attempts to force their way out of the asylum centre and what is happening in the Middle East –they are afraid of similar excesses being brought here, they see the migrants as a potential threat even if they never come face to face with them.”