For the quiet village of Pysely, near Prague, the news must have come as a shock: police taking a 30 year-old local resident into custody, suspected of being the so-called 'cyanide blackmailer' He, it is believed, led authorities on a three-week chase, in an attempt to extort 300 million crowns. Those who were under threat: random patients at Prague hospitals the anonymous assailant had warned would be poisoned, unless his demands were met. 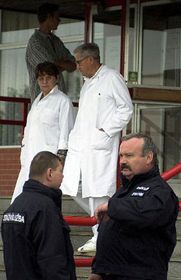 Photo: CTK At last, it seems, a breakthrough for Czech police in one of a spate of bizarre extortion cases to hit the country this year - on Friday the announcement police had taken a suspect into custody, a 30 year-old man from the village of Pysely, near Benesov, south of Prague, a man they say is the 'cyanide blackmailer'. Allegedly found in his home: samples of the deadly poison as well as instructional literature, though some questions remain. The story, reported by TV Prima, did not correspond fully with testimony given by an independent observer present at the scene, who said he had only noticed a folder labelled "poison", though he admitted other details could have escaped his attention in the fray. Meanwhile, for their part, police officials are hardly giving away details, including more precise elements that helped lead to the suspect's arrest.

What is known is that it was the anonymous assailant's calls that gave officials at least some first clues: from the calls using the public 158 emergency line, authorities were able to deduce the assailant was indeed a Czech national and that he had a central-Bohemian accent. Unofficial sources have also reported that it was a 2nd warning letter that was key: examined by graphologists, the letter is believed to have been written by the suspect's own hand, something that will still have to be proven.

For the moment, police have a suspect in custody, and it remains to be seen how the case will develop. The three-week long hunt, as well as a very real warning in early May - in which the anonymous caller left vials of cyanide in a Prague maternity ward kitchen, as well as in a Prague phone booth - made the threat to Prague hospitals tangible enough. Now, a court of law will have to find if the man is guilty as charged: a confirmation of his role as the cyanide blackmailer would carry a sentence of up to twelve years in prison.