A unique and extremely rare medieval casket has just gone on display at Prague Castle. The 13th century artefact – gilded in gold and silver and covered with precious gems – is believed to contain the remains of a lesser known French saint. But the story behind the shrine is just as compelling as the work itself: it was hidden at the end of WWII, and only re-discovered in the 1980s under circumstances that resemble a Cold War spy novel. 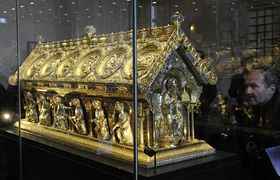 Known as the Reliquary of St Maur, the shrine is considered one of the most valuable artefacts of its kind in the country, whose historic value is often compared to that of the Bohemian crown jewels.

The casket is adorned with gilded silver, small statues, reliefs and other decorations, along with hundreds of gems. It was named after a 6th century French saint, whose remains it is believed to contain.

The shrine is normally housed at Bečov chateau in west Bohemia, and local curator Kateřina Pánková says a detailed analysis showed it contains the remains of at least four people. 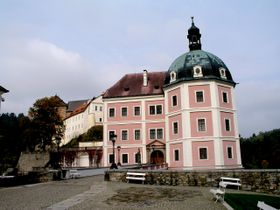 Bečov chateau “Legend has it that it also contains a finger of St John the Baptist. But in the 1990s, a DNA analysis carried out during the renovation showed that the shrine contained the remains of four individuals – male and female, and some child’s milk teeth. There were fragments of long bones, of a skull and also some unidentified fragments.”

The reliquary was made in Belgium in the 13th century, where an aristocrat, named Beaufort-Spontin, bought it some 600 years later, and brought it to Bečov.

At the end of the Second World War, however, his descendants fled the estate which the authorities later confiscated as German property.

Members of the family took many of their riches with them, but they hid the shrine inside the chateau, hoping to return for it one day. 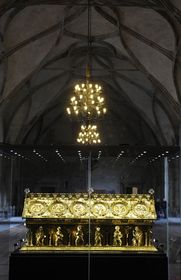 Photo: CTK Nothing was known about the shrine until 1984, when an American named Danny Douglas approached the Czechoslovak embassy in Vienna with a most unusual offer: 250,000 dollars in return for an unspecified art object, hidden in Czechoslovakia.

The communist authorities were baffled at first, but then decided to play along. While holding negotiations, they launched “Operation Antiquity” in search of the mysterious object, eventually outwitting the American. Kateřina Pánková again.

“At the same time, an investigation was launched to make sure the object had not been stolen, or that it wasn’t something of great historical value. The police searched for the object for more than a year. Some undercover officers even met with Mr Douglas, and got more clues out of him about the object’s location and size. But they still did not know what they were looking for. Then they found a photo of the reliquary in a 1933 book, and therefore started searching in Bečov chateau.” 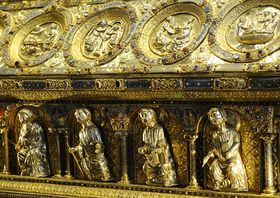 Photo: CTK There, police investigators finally found the shrine in November, 1985, hidden under the floor of the chapel. After the fall of communism, the casket underwent a thorough renovation which was only completed in 2002.

The exhibition at Prague Castle marks the 25th anniversary of the rediscovery of the artefact, and runs until the end of February. During its time it was supposed to be the largest of the West Slavic churches, but the structure which archaeologists have found at… 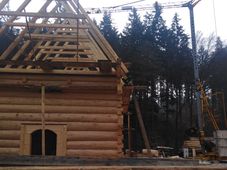 Replica of rare wooden church ready to be installed

Carpenters are completing a replica of a rare 16th century wooden church from the village of Guty in Silesia, which was ravaged by…