Czech trade unions have decided that their show of force in mass demonstrations needs muscle. The Czech-Moravian Confederation of Trade Unions says that tripartite negotiations with the government are over and it’s time for a new protest which, as their chairman Jaroslav Zavadil said, is going to hurt. The demonstration on Wenceslas square, Prague, April 21 2012, photo: Barbora Kmentová No more negotiating, take to the streets. Such was the decision of the Confederation of Trade Unions on Wednesday. Last weekend’s demonstration in Prague may have been the largest since the Velvet Revolution, but the trade unions want it even bigger, more radical and they need it to hurt. Transport unions say they are prepared to protest within days, but will wait to coordinate with other unions and activists.

Prime Minister Petr Nečas responded with a statement that he cannot force the unions to the negotiating table, but said the blame was on them for forcing a tense situation.

But the chairman of the Czech-Moravian Confederation of Trade Unions says the only thing he is willing to discuss is the end of the reforms and the fall of the government. The current situation – by which for example the government demands a strong majority, gets a majority of two and claims victory – is proof of nothing other than the fact that the cabinet intends to stay in power come what may. Jaroslav Zavadil is the chairman of the confederation. 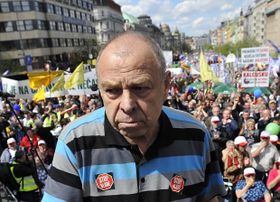 Jaroslav Zavadil, photo: CTK “Throughout all of the negotiations so far the government has never made us believe that they were the least bit interested in seriously discussing our proposals. The ball always stops at their policy platform, nothing is ever agreed upon and we’re just there for scenery. So I have no confidence in this government or in further negotiating any specific measures.”

The unions will not yet be drawn on what kind of protest they have in mind, but given the depth of public rancour, a general strike is clearly on the table. A blockade on the capital was also mentioned as an option for the near future, sometime during May, but what will be done specifically will be announced next week.

Finance Minister Miroslav Kalousek rejects the argument that the government has failed to constructively communicate with the trade unions, saying they have negotiated patiently and agreed on real compromises. He told Czech Radio on Wednesday that the threats were the logical conclusion of the unions’ approach to the situation:

“They already refused to show up for the last round of negotiations and they left early at the one before that. The unions have simply chosen a confrontational tone, to bring the situation to a head, and to set conditions that make it clear that they are playing politics. They are not negotiating for their employees, they are a political power that wants to overturn the results of the election. And I’m not criticising that, I’m just stating the facts.” 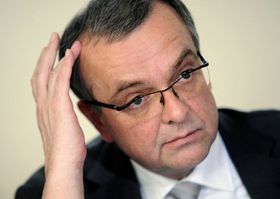 Miroslav Kalousek Another fact of the matter is public opinion, which recent polls suggest is overwhelmingly in favour of early elections, with nearly 80% in some surveys saying it’s time for the government to wrap things up. The unions are thus riding a wave that brought more than 100,000 people into the streets last weekend, and there is little doubt they can do it again, and even stronger, amid a constantly shaky political situation.