This year's Folkove Prazdniny, or Folk Holidays, festival begins in Namest nad Oslavou in south Moravia on Saturday. Among the main attractions will be Irish singer Glen Hansard, who plays regularly in the Czech Republic, both solo and with his band the Frames. Other artists appearing over the eight days of the festival will include guests from Italy, Senegal and the United Kingdom.

Czech music will also be well represented, of course, with performances by Jablkon, Iva Bittova, Hradistan and Cechomor, who will do a special acoustic set with Irish singer Iarla O'Lionaird.

The Namest nad Oslavou festival has been running for 20 years now, but organiser Jiri Hejl says the town has a much longer tradition of music.

"It's very interesting because the owners of the Chateau have a big history focused on music. Namest was in the past the centre of music in Moravia, because Namest is roughly 60 km from Vienna."

Among those who performed in the town in the past was Antonio Salieri, court composer to Emperor Franz Joseph and portrayed as Mozart's killer in Milos Forman's film Amadeus.

But in Namest today, specifically over the next eight days, you are more likely to hear acoustic guitars than Italian operas. And as well as music the Folkove Prazdniny also includes other arts, such as painting workshops and literary readings. And, says Jiri Hejl, the atmosphere is unusually intimate.

"We are a small festival and because we have money from sponsors we don't have to focus on commerce. Our capacity is roughly 500 to 1,000 for each concert, and we expect around 5,000 visitors in total for the whole festival. And many, many families attend our festival because it's safe for children."

For more information go to www.folkholidays.com 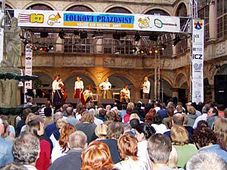 The Czech Republic is planning to buy 12 military helicopters at a cost of around CZK 10 billion crowns, Prime Minister Bohuslav Sobotka…