The start of the New Year has kicked off the largest and most successful fund-raiser in the country – the now traditional Three Kings Collection, organised by the Catholic charity Caritas. Now in its twentieth year, the collection has in total raised more than 1.3 billion crowns in aid of the needy. Photo: Zdeňka Kuchyňová Throughout the Czech Republic, thousands of volunteers, mostly children, will take to the streets in the coming days dressed as Kaspar, Melichar and Balthazar – the three wise men, later known as kings, who followed the star of Bethlehem to find the new-born Jesus.

The Biblical story is firmly rooted in folk traditions, and since the year 2000 also part of the largest charity collection in the Czech Republic. The volunteer “kings” go carolling from house to house, leaving their initials – ‘K + M + B’ – above the door frames as a symbol of blessing.

Traditionally, the chalks they write with have been blessed by a local bishop. The letters are also said to stand for “Christus mansionem benedicat” (May Christ bless this house). Ethnographer Alexandra Zvonařová explains:

“The Three Kings procession is part of a long tradition of bringing blessings in the New Year. Originally, they were men, but the roles gradually went to children. The post-revolution charity collection differs from the original tradition, but it’s nice.”

Three Kings Collections are held in different towns on different days, starting on New Year’s Day. In Pilsen, for example, it starts on January 4, and carollers are mainly raising money for the handicapped. Jiří Lodr, head of Diocesan Caritas, says the aim is also to bring communities closer together.

“Our carollers should have open hearts and bring joy to others – that is the main goal. At the same time, they should keep their eyes and ears open so that they can learn of people who are for example all alone and may need support also during the year.”

The Three Kings Collection, which this year runs until January 14, is organised by Charita Czech Republic, the largest non-state provider of social services in the country. Over the past two decades, the processions have in total raised more than 1.3 billion crowns in aid of the needy. 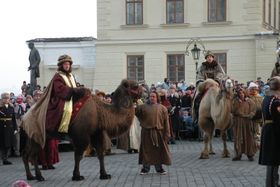 Procession of three kings on camels at Prague Castle, photo: Martina Schneibergová The Three Kings Collection is also a chance to encourage young people to do volunteer work, says Květa Lišková, a pensioner who leads a carolling procession in Třeboň that includes her grandchildren.

“I mainly do it because of the children. Their eyes are glowing when they are in the procession, and it inspires them to do something good for someone else.”

This coming Sunday at 3pm, a procession of three kings on camels will set out from the main square of Prague’s Malá Strana quarter. “Kaspar, Melichar and Balthazar” will the cross the Charles Bridge and head to Old Town Square, to join a concert performance of Czech Christmas Mass by Jakub Jan Ryba.

Charita expects about 24,000 groups of “wise men” and carollers will join in the effort this year. The charity expects to surpass the record sum of 122 million crowns collected in 2019. full Three Kings Concert will be broadcast live on Czech Television on January 5 starting at 6 pm. In between performances, moderators will present reports on how funds are being used to help the needy. (January 6 is the Three Kings’ Day; as the twelfth (and last) day of Christmas, it is also the day many Czechs take down the seasonal decorations.) 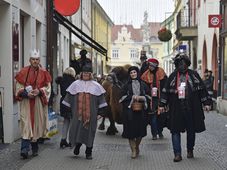 January 1st saw the start of the Three Kings Collection, the largest and most successful fund-raiser in the country. Organized by the…