Town tears down playground, blames it on Brussels, and then takes it back

Roztoky, which is just a fifteen minute drive from Prague, is a quiet little town overlooking the River Vltava. With the exception of its beautiful chateau, it is not a place that has tended to attract much attention. That was until last month, when a row broke out between town councillors and some local residents over an order that the administration said had come from Brussels.

"My Name is Lubos Chlouba and I've come along to a meeting at the town hall because I would like to know what's going on over our children's playground. Several of us got together and built the playground ourselves. Then one day someone came from the local council and destroyed the playground completely. Nobody knows why. The only thing they said was that it was done because the playground didn't conform to EU standards but nobody was able to tell us which standards they were referring to and what will happen now."

Parents and numerous volunteers built the playground with their bare hands back in 2000. The town administration of the time, a number of non-governmental sponsors, and some parents themselves financed the project. The playground was put up opposite the local school and became the children's favourite place to play. But on the morning of March 30, school children, like Simon, had to witness their playground being levelled to the ground, without any warning.

"There was a castle, a rock climbing wall, and a slide. We watched it being destroyed, through our school window, and were very sad. I don't know what to say..."

But after some research, parents discovered that Brussels does not require playgrounds, which do not fit EU standards, to be torn down. Instead, EU regulations state that old playgrounds should be rebuilt over time to conform to standards.

The time was right to ask Roztoky's deputy-mayor Jaroslav Huk, who is responsible for the town's playgrounds, to explain. He denied ever having mentioned EU standards. The decision to tear down the playground, he says, was made after experts found it no longer safe, with some of the wooden elements rotten at their foundation. Mr Huk adds that the move to inspect the town's playgrounds was not in reaction to EU norms but because a local bye-law from the late 1990's requires it.

After heated discussion at the town hall meeting, it appears that local residents and the town administration have reached consensus. Parents have yet to get an apology but town councillors have miraculously found 200,000 crowns (around 9,000 US dollars) to start building a new playground and this week, children and their parents will meet with the administration to decide what it will look like.

But one question will remain unanswered: why were EU regulations cited in the first place? With most of the town councillors representing the Euro-sceptic opposition Civic Democratic Party, was it an attempt to give Brussels a bad name, which then backfired after local residents put up a fight?

According to Jitka Ticha, a town councillor who is not from the Civic Democrats, the playground incident is an act of revenge by the party's councillors, who argue that Brussels bureaucrats are trying to dictate to Czechs what they should do. "This is how they are making citizens pay for voting in favour of EU membership," Mrs Ticha says. Whether or not she is right, it's clear that the European Union has become a hot political issue, even at the level of local politics. 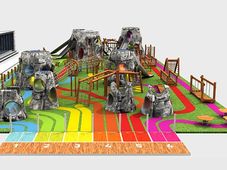 Getting youngsters to play outside on a sunny day is an increasingly difficult task. Most parents now find it near impossible to pry…

Thirty percent of children’s playgrounds and sports grounds tested every year by the Czech Trade Inspectorate are faulty in some way,…