The former hard-line Communist Party official Karel Hoffman on Monday began serving out a four-year prison term for his role in the 1968 Soviet-led invasion of Czechoslovakia. Mr Hoffmann, head of telecommunications at that time, was found guilty of "sabotage" for having ordered the country's medium-wave transmitter to stop official radio broadcasts condemning the invasion. 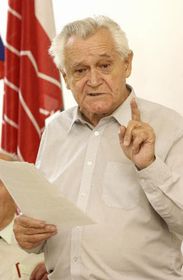 Midnight, August 21st, 1968. A Czechoslovak Radio presenter makes an announcement that would stun the nation and send shockwaves around the world:

Moscow had ordered the invasion in order to crush the burgeoning reforms and freedoms which came to be known as the Prague Spring — Communist Party first secretary Alexander Dubcek's attempt at creating "Socialism with a human face."

Now 80 years old, Karel Hoffmann — the man who ordered the critical radio broadcasts of the invasion off the air — is to date the only top Czech politician of the former regime to be sentenced for actions connected to the 1968 invasion of Czechoslovakia by fellow Warsaw Pact troops. 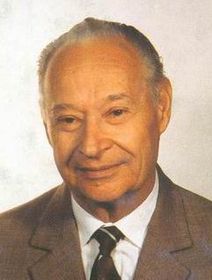 Alexander Dubcek A couple of hours before being taken off to prison on Monday, Mr Hoffmann — who maintains he has committed no crime and is being tried for his "devotion to Socialism" — struck a defiant tone when speaking to the media:

"The courts have proven that I had the radio broadcast stopped. Please, the courts did not have to prove anything. I never tried to hide it. From the start, I not only admitted it but stood behind my action. I gave the order just before two o'clock and I thought it was the right thing to do and can't do anything about it anymore today. So, no one had to incriminate me, nor prove anything because it was clear from the start."

As Director of the Central Communications Authority, Karel Hoffmann used his authority to cut off an announcement prepared by the Communist Party Central Committee, condemning what the Czech leadership said was an invasion of a sovereign state:

"The Leadership of the Central Committee of the Czechoslovak Communist Party considers this act a violation not only of relations between socialist countries but also of international law." 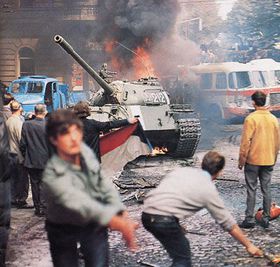 August 1968 Prosecutors have characterised Karel Hoffmann as a hard-line Communist who attempted to legitimise the Soviet-led invasion. According to the state attorney's office, Mr Hoffmann gave the order to cut radio transmissions so that Czechoslovak citizens wouldn't hear the truth about their government's opposition to the invasion and is therefore guilty of "treason."

Mr Hoffmann did not face charges of "treason" due to a lack of evidence but he was tried for "abuse of office" and in June 2003 was sentenced to four years in prison. After losing a final court appeal on that judgement, in October last year he was found guilty of "sabotage."

But his incarceration, which began on Monday, may well be a short one: President Vaclav Klaus has said that Mr Hoffmann's actions in 1968 amounted to little more than a violation of the telecommunications law and there is speculation that President Klaus will grant the octogenerian a pardon.

"The President expressed doubts over my verdict. He found out for himself how many elderly people are in prisons and found out that there were only three people older than 70 years. I just want to say one thing; I'll make a statement once I've decided whether or not to accept a pardon. I did not ask to be pardoned but have rather been calling for justice — and I will continue to call for justice." 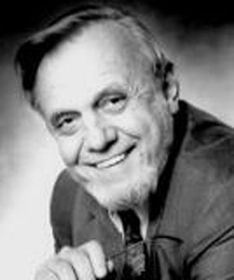 Prof Kohak argues that establishing a 'Truth and Reconciliation Commission,' similar to what was adopted in South Africa to deal with the crimes of the Apartheid era, would have better served the interests of justice than the judicial approach taken here thus far.

A glaring example, he says, is the fact the determination of "guilt" in this case came down to whether or not Karel Hoffmann violated the telecommunications law of the day.

"This is exactly what I find wrong with the judicial approach because instead of judging Hoffmann's entire role in active support of the Communist regime, it focuses on petty legality. I think the focus of the trial is wrong because it does not focus on revealing the whole monstrous era, but simply on pinpointing the concrete guilt of one specific individual."

"I think the whole approach, which singled out a few people and tried to prove guilt after that many years, is most unfortunate. I think what was very badly needed was not to punish a few people but to bring everything to light, to let none of the deeds of the Communist era remain hidden."

"These are old people. Yet on the other hand, they are guilty, and further, no punishment can be appropriate. This is why I think that South Africa chose the right approach in their Truth and Reconciliation commissions, and that our judicial approach is somewhat unfortunate."

"But as long as we are going to follow this approach, then it seems to me that the verdict of guilty is very appropriate."