After a four-year break, Prague City Hall will once again join the Flags for Tibet initiative, expressing support for Tibetan independence. On Wednesday Prague mayor Zdeněk Hřib is also set to meet with the head of the Tibetan government in exile, Lobsang Sangay, who is in the Czech capital to attend the One World Documentary Film Festival. 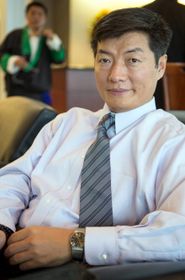 Lobsang Sangay, photo: Christopher Michel / Flickr / CC BY 2.0 Hundreds of Czech municipalities, including Prague City Hall, have been taking part in the annual Flag for Tibet initiative since 1996, marking the day when a Tibetan uprising was crushed by the Chinese in the Tibetan capital Lhasa in 1959. However, for the past four years, under the leadership of the ANO party, the City Hall refused to hoist the Tibetan flag.

The newly elected mayor of Prague, Zdeněk Hřib of the Pirate Party, has announced a change in the city’s policy towards China. On March 10, Tibetan flags will fly on two of Prague City Hall’s buildings, the New Town Hall on Marian Square and the historical Škoda Palace.

Prague councillors also plan to make changes to the sister city agreement with Beijing, which was approved by the previous leadership. They are currently negotiating about removing the article recognizing a “unified China”.

On Wednesday, Mr Hřib is due to meet with the head of the Tibetan government in exile, Lobsang Sangay, who is in Prague to attend the opening of the One World Documentary Film Festival. Prior to the meeting, Mr Sangay spoke to Czech Radio about the anniversary of the Tibetan uprising:

“On the other hand the fact that I am standing here, the fact that his Holiness the Dalai Lama visited the Czech Republic several times, means we are still standing on our feet.”

Mr Sangay says that symbolical events, such as the Flag for Tibet Initiative, are very important, not only as act of resistance but also as an assertion of the Tibetan people’s identity and dignity. 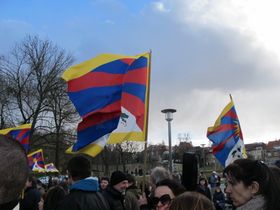 Photo: Martina Schneibergová “Three years ago in Prague when Chinese president Xi Jinping visited the city, the Tibetan flag was not necessarily banned, but it was seized and not shown to the public.

“But then the people turned up and said: this should not happen in the country of Václav Havel or in Czech democracy. And that flag became a symbol of resistance.

“Symbolism matters. It is very important. Once you give up hope and symbols, you give up lots of things in life. So I really appreciate all those towns and cities which hoist Tibetan flags in the Czech Republic, Slovakia and rest of Europe.

“It has been an act of defiance and one should send a message that Tibetan flag is a symbol of democracy, human rights and non-violence.” 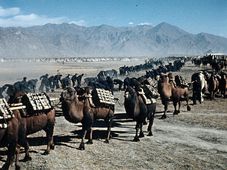 More than sixty years after its premiere, a unique Czech documentary from Tibet, made in the early 1950s, returns to Czech cinemas… 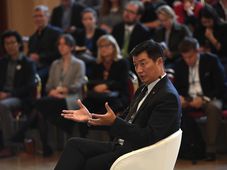 A “Friends of Tibet” group has just been established by fifty deputies and senators in the Czech Parliament. The news was announced… 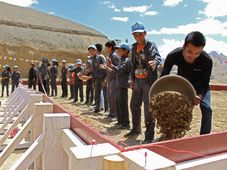 Czech NGO teaching children in the Himalayas to play hockey

The Czech NGO Brontosauri v Himalájích has been helping the village of Mulbekh, in Little Tibet, for ten years now. Attention is focused…